LAGOS, Nigeria — Christopher Johnson was known for two things. His enthusiastic dancing in the street, which made everyone laugh. And his habit of hurling insults at strangers, which constantly got him into trouble.

So when Mr. Johnson died in late September, likely of sepsis after a leg injury according to friends, everyone in Oluti, his lively neighborhood in Nigeria’s biggest city, heard.

Everyone, that is, except the government registrar responsible for recording deaths.

As the coronavirus pandemic has swept across the world in 2020, it has become increasingly evident that in the vast majority of countries on the African continent, most deaths are never formally registered. Reliable data on a country’s deaths and their causes are hard to come by, which means governments can miss emerging health threats — whether Ebola or the coronavirus — and often have to formulate health policy blindly.

Covid-19 is often said to have largely bypassed Africa. Some epidemiologists posit that its youthful population was less at risk; others that prior exposure to other coronaviruses gave some protection. But like other diseases, its true toll here will probably never be known, partly because elevated mortality rates cannot be used as a measure as they are elsewhere.

Stéphane Helleringer, a demographer who has worked on mortality in several African countries, said that on the African continent, “There are very, very few countries that even attempt an estimation of mortality based on death rate.” 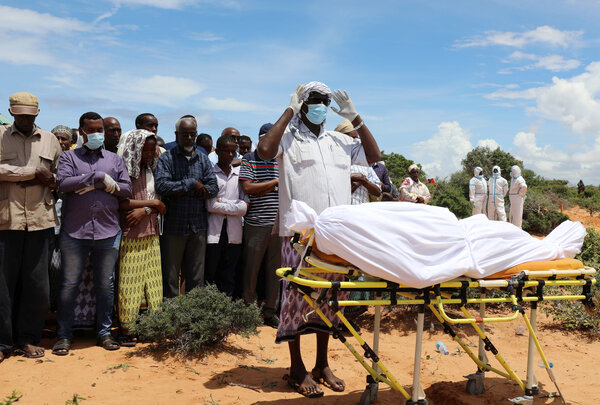 Recently, in a local government office in Eti-Osa, an upscale area of Lagos, stacks of papers, registers and perforated books of yellow birth and death certificates surrounded Abayome Agunbiade, a registrar with the Nigerian Population Commission.

He said bereaved residents tended to avoid his office, which was small and badly lit, unless they need a death certificate to settle a dispute over an inheritance or get access to a pension.

“If they don’t need it, they will not come,” Mr. Agunbiade said.

In 2017, only 10 percent of deaths were registered in Nigeria, by far Africa’s biggest country by population — down from 13.5 percent a decade before. In other African countries, like Niger, the percentage is even lower.

Families often don’t know they are expected to report deaths, or even if they do, there is little incentive to do so. Many families bury loved ones in the yard at home, where they don’t need a burial permit, let alone a death certificate.

The United Nations Statistics Division collects vital statistics from around the world. In North and most of South America, Europe and Oceania, it says at least 90 percent of deaths are registered. In Asia, coverage is patchier.

But for most African countries, the U.N. has no death data at all.

In the absence of hard data, researchers have come up with other ways of estimating mortality rates.

Every few years, most African countries do surveys to try to capture broad demographic and health trends. People are asked about who in their households died and what the cause was. But these surveys are irregular, and there’s much room for error.

Some researchers try to figure out how many people are dying by doing mobile phone surveys. Others count graves on satellite images, or ask gravediggers, as in the 2014 Ebola outbreak in West Africa.

I asked undertakers and coffin makers on a busy street in one of Lagos’s oldest districts, where funeral band boys chattered, drums and trumpets under their arms. For decades, Odunlami Street has been the place for everyone who’s anyone to get a casket.

Half a dozen casket carpenters and funeral directors on Odunlami Street said they had noticed that business was particularly brisk in June and July.

“The mortuaries were jam-packed,” said Tope Akindeko, manager of Peak Caskets, leaning on a coffin decorated with gilded reproductions of the Last Supper. The caskets he sold then were rough, cheap models, he said, while expensive American-made steel ones shipped in from Batesville, Ind., stayed on the shelves.

Could it have been a spike in Covid-19 deaths? Or perhaps a backlog of funerals, after two months of lockdown in Lagos? Because few deaths are registered, it was hard to tell.

Though death might not register in the public realm, it is supremely important in the personal one.

In southern Nigeria, if the person being buried has reached a great age, funerals tend to be a celebration of life, complete with bands and dancing pallbearers. Sending out a loved one in style is, for many, extremely important. Colorful death notices are sent around on social media and, in some areas, set outside bereaved families’ houses like “For Sale” signs — carrying slogans like “Exit of an Icon,” “A Giant Sleeps,” or for a younger person, “Painful Exit.”

Many Nigerians said they had received far more of these notices in 2020.

But Covid-19 has not hit Africa as hard as other regions, like Europe or the Americas, at least according to official statistics, presenting a puzzle that epidemiologists have scratched their heads over. The numbers presented daily by the World Health Organization show far fewer people dying of it than the United Nations had predicted in April.

Elsewhere in the world, epidemics have been identified by unusual spikes in deaths compared to the mortality rate in a normal year. Most African countries cannot do this, as they do not know baseline mortality.

In the absence of data, experts can make wildly different claims.

“The mortality due to Covid in the African continent is not a major public issue,” said Dorian Job, the West Africa program manager for Doctors Without Borders. What he called “crazy predictions” on Covid — the United Nations said in April that up to 3.3 million Africans would die of it, for example — meant that harsh lockdowns were imposed. The economic and social effects of these would be felt in Africa for decades, Dr. Job said.

But at the other end of the spectrum, researchers have just declared that there was a huge, hidden outbreak in the capital of Sudan. In the absence of a good death registration system, they used a molecular and serological survey and an online one distributed on Facebook, where people reported their symptoms and whether they’d had a test. The researchers calculated that Covid-19 killed 16,000 more people than the 477 deaths confirmed by mid-November in Khartoum, which has a population roughly the size of Wisconsin’s.

Khartoum is only one city in a vast, diverse continent with a variety of approaches to fighting the pandemic. But several factors that the researchers cited for why the Covid-19 caseload might be vastly underreported — stigma, people unable to get tested, the fact that the threshold for reacting to any disease is high — are true in many African countries.

“Every time somebody says ‘I’m so glad Africa has been spared,’ my toes just curl,” said Maysoon Dahab, an infectious disease epidemiologist at King’s College London who worked on the Khartoum study.

Mr. Agunbiade, the Lagos registrar, fills out a table each month tallying up what caused the deaths he registered, if known. There are about a dozen categories to choose from. Old age. Malaria. Maternal mortality.

There is no Covid-19 column, though he said sometimes he crossed out the AIDS / H.I.V. column and put Covid. Perhaps many Africans are dying of Covid-19, but their deaths are being misidentified — much as studies suggested they were early in the United States epidemic.

Then again, maybe not.