Felix Tshisekedi, an opposition leader whose victory in presidential elections last month is widely considered to be illegitimate, took the oath of office on Thursday vowing to tackle the country’s endemic corruption.

Shortly after assuming power, Mr. Tshisekedi announced that he would free all the country’s political prisoners.

Despite lingering accusations of vote fraud, neighboring countries, the United States and other foreign powers, eager to promote stability over potential chaos, hailed the first peaceful transfer of power since Congo’s independence, in 1960.

On Wednesday, the United States’ State Department, having at first warned about sanctions for individuals accused of impeding the democratic process, struck a conciliatory tone and said it was “committed to working with the new government.”

Other regional heavyweights, like South Africa, Zambia and Angola, countries that had initially cast doubts on the election results, came around as well, congratulating Mr. Tshisekedi on his victory.

While officials from 10 countries attended the ceremonies, only one leader, Uhuru Kenyatta of Kenya, went in person.

But the Dec. 30 elections were marred by irregularities, and the handpicked candidate of President Joseph Kabila, Emmanuel Shadary, attracted so little support that the president had to turn to Mr. Tshisekedi to maintain an appearance of credibility. 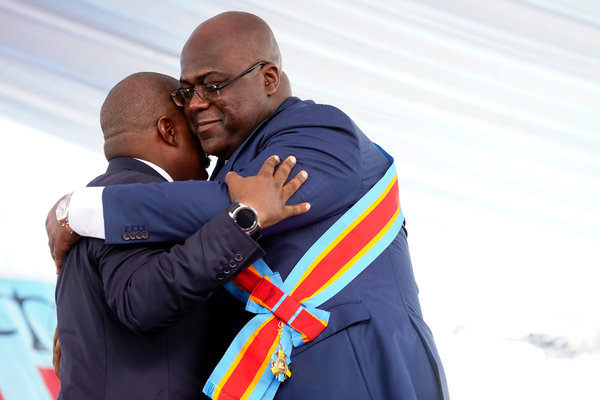 The man who is widely believed to have won the election, Martin Fayulu, an American-educated former Exxon manager, had come to symbolize widespread public anger against Joseph Kabila, Congo’s departing president who had been in power for nearly 18 years. Mr. Fayulu appealed to the Constitutional Court for a recount, but judges struck down his demand last Sunday and certified Mr. Tshisekedi as the victor.

As evidence of vote rigging, Mr. Fayulu’s supporters pointed to two cities in the east, considered to be his stronghold, that were excluded from voting because of what the government said was instability and an Ebola crisis.

Officials deny the vote was rigged, and insist that it was the country’s best ever.

The Catholic Church, an influential and widely respected body that sent 40,000 election observers across the country, backed Mr. Fayulu’s claims to victory. Credible opinion polls before the vote had also shown him to be the winner. Suspicions over the results were reinforced after the Southern African Development Community, an intergovernmental regional bloc, called for a recount.

So, too, did the African Union, which last week expressed “serious doubts” about the vote count. But after a flurry of behind-the-scenes negotiations this week, most of the government’s critics backed down, and by Thursday were prepared to accept the outcome.

The African Union members “are undoubtedly all aligned on avoiding any potential flare-ups in violence in the D.R.C. to spread across their own borders,” said Adeline Van Houtte, an analyst at the Economist Intelligence Unit, using the initials for the Democratic Republic of Congo.

“So the question that remains is, ‘What caused the internal divisions that forced them to back down on the D.R.C. post-electoral crisis?’ ” A possible answer, she said, is that a lot of elections are planned in Africa in the coming year, including in South Africa.

With that in mind, she said, “some African leaders are probably wary of opening the door to every opposition leader to contest elections results that could lead to a recount.”

Mr. Fayulu, who had been supported by two of Mr. Kabila’s biggest opponents — themselves barred from running because of their popularity — was the president’s most-feared foe. During the campaign, Mr. Fayulu threatened to pursue Mr. Kabila and his entourage for alleged financial and political crimes, and to clean up endemic corruption.

By contrast, Mr. Tshisekedi, many observers say, was considered to be more amenable to working with Mr. Kabila. Shortly after the vote, both sides entered negotiations, and speculation had been rife about the nature of the deal.

In a speech after his inauguration, Mr. Tshisekedi stressed his independence of Mr. Kabila. “We have been your staunch political opponent, Mister President,” he said. “We are forgetting nothing of our political fights, the difficult times we have gone through.”

He also had praise for the former president. “In your exercise of power, you were able to move the country toward a transition that has ended in the reunification of a divided country,” Mr. Tshisekedi said. “But in none of these times did fear discourage your determination to permit the Congolese people to freely choose their leaders.”

Mr. Tshisekedi is the son of Etienne Tshisekedi, one of Congo’s most charismatic opposition leaders and a vociferous critic of President Kabila and his father, Laurent-Desire, a rebel leader turned president who was assassinated in 2001.

Etienne Tshisekedi died in 2017, but such were the tensions between him and the Kabilas that his body is still lying in storage in a funeral parlor in Belgium, awaiting repatriation to Congo for burial. A spokesman for the new president said the burial would take place forthwith.

Many observers have said that the departing president will continue to control the country in everything but name.

Mr. Kabila’s party dominated legislative elections that took place at the same time as the presidential vote. That gives it a majority in Parliament and the power to appoint a prime minister, who in controlling cabinet appointments arguably wields greater power than the president.

Mr. Kabila himself has been named a senator for life, with significant legal immunity, and is considered likely by analysts to be named the president of the senate.