The first time Omar Degan set foot in Mogadishu, in October 2017, he quickly grasped that it bore little resemblance to the picturesque cityscape his parents, Somali refugees who had fled to Europe, described to him growing up.

Instead of an idyllic scene of whitewashed buildings and modernist architecture set against the turquoise waters of the Indian Ocean, he found a new Mogadishu, one that had emerged in a rush to rebuild after Somalia’s civil war. Concrete roadblocks and blastproof walls remained pervasive, and camps for displaced people abutted multicolored condominiums with barely a hint of local styles or heritage.

For Mr. Degan, a 31-year-old architect, that dissonance echoed a loss of cultural identity that he has since worked to restore, and that he hopes others will increasingly embrace in the process of rebuilding the wounded city.

In his four years in Somalia, he has created through architecture a new style and sense of what the country is and can be after decades of civil war and terrorism, mixing traditional themes with more modern ones like sustainability.

That sense was something he had also been yearning for personally.

Mr. Degan was born in June 1990 in Turin, in northwest Italy, to parents who had left Somalia a few years before the war flared up. Growing up there, he says, he never felt that he fully belonged — caught between his identity as a Somali man with roots in a war-torn nation and a Black Italian citizen in a country that didn’t fully embrace him. 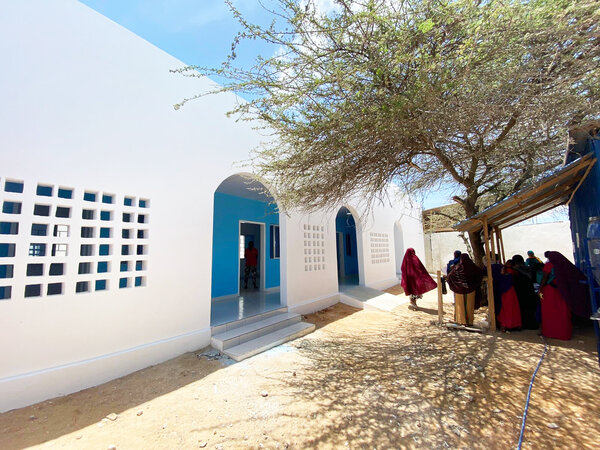 “In university,” he said, “there was even this challenge where even the professors would say, ‘Oh, you speak very good Italian,’ giving you the reminder that you don’t belong.”

His parents wanted him to study medicine, but that dream died after his mother cut her foot one day and he couldn’t bear the sight of the blood. He liked to sketch, though, so he pursued bachelor’s and master’s degrees in architecture at the Polytechnic University of Turin, where he specialized in emergency architecture and post-conflict reconstruction.

Although Somalia was on his mind when he chose that focus, he said he was also influenced by a drive to find meaning in life and to learn skills that he could use for the common good.

Despite that underpinning, he said he didn’t consider taking his work to Somalia out of security concerns. Instead, he worked for several years in West Africa, Latin America and Asia before moving to London for an intended career break. There, he shared quarters with a cousin who was looking for help building a community center and a mosque back home in Somalia.

Mr. Degan agreed to assist her with the design but told her, “There’s no way I am coming with you.”

But she was persuasive, and a month later, he was on a flight to Mogadishu, ready to put his skills to use in his family’s home country.

This year marks three decades since Somalia’s strongman president, Maj. Gen. Mohammed Siad Barre, was deposed, setting off a brutal civil war. Mogadishu — along with many other Somali cities — was ransacked by clan warlords, armed teenagers and later terrorists who destroyed government offices, looted cultural centers and decimated its Islamic and Italianate landmarks. In the process, they also robbed the city of what the Somali novelist Nuruddin Farah called its “cosmopolitan virtues.”

Over the past decade, with the return of a semblance of stability, Mogadishu has slowly begun to transform. New apartment blocks and shopping centers have sprouted, the national theater and stadium have been renovated and historic monuments have been restored.

But when Mr. Degan landed in the city in 2017, he was repulsed by the first structure he encountered: the airport’s black and blue, brick and glass terminal. “In a sunny, coastal town, I was wondering who built this,” he recalled. “Architecture usually tells us a story — the story of our past heritage and hopes — and I could see none of that here.”

The centuries-old city is dotted with the footprints of sultans, European powers, peacemakers and warmongers, and questions swirled in his mind: How does loss factor into the reclaiming of a war-weary capital? How do you rebuild in a city where terrorist attacks remain frequent? Can modern structures pay heed to the nuances of history, culture and community?

To acquaint himself with the capital Mr. Degan, who also speaks English and Somali, with an Italian accent, went on what he called a “listening tour,” engaging young people from the city and fellow returnees from the diaspora. He also traveled to major cities across the country, inspecting local designs and connecting with various communities — at one point even milking a camel.

Fascinated by the resilience he saw, he was determined to practice architecture that celebrated Somali identity and traditions. “I want to recreate in a contemporary way that sense of belonging that was lost in the war,” he said.

In the years since, his designs have included a restaurant and wedding hall with large terraces, gleaming white walls and furniture decked with the traditional multihued “alindi” fabric. He has also designed a portable health clinic to treat children in rural areas, a school with garden spaces and a minimalist, airy maternity ward in a Mogadishu hospital.

Almost all of Mr. Degan’s designs are painted white in respect of the city’s traditional white buildings, which earned it the title “White Pearl of the Indian Ocean.”

Yet his designs also embrace newer realities: He is working on a modern variation of the Somali stool and has conceptualized a memorial for the hundreds of people who lost their lives in a double truck bombing in Mogadishu in October 2017 — three days after he arrived in the city.

Initially, Mr. Degan said, many people were excited about all that he could do to rebuild Somalia. But others thought he was “crazy” when he started talking about sustainable architecture, minimizing environmental damage and looking to the past to shape the future. Some developers wanted him to work for free.

“It took me years to make people understand what an architect does,” he said, laughing.

He works to connect to the broader community through social media, posting colorful photographs of daily life in Mogadishu on Instagram while challenging humanitarian organizations and private companies on their designs. On YouTube, his videos explore Mogadishu’s old town and beaches.

“I am looking to share ideas, communicate and look for creativity and suggestions in the community,” Mr. Degan said. “I don’t think I would be where I am without it.”

Having established his own practice in the city, he also now mentors young architects. Last year, he published a book about architecture in Mogadishu and is working on a handbook on emergency designs in Somalia.

It’s all a marked shift from his years growing up in Italy when he sometimes felt “ashamed to be Somali,” Mr. Degan said in a 2019 TEDx talk. And Mogadishu, a city that he says he’s “addicted to,” has helped anchor him.

“Mogadishu gave me a sense of life, a purpose,” he said. “I belong here, and I want to build it so that others can come and belong here, too.”