SAMBAVA, Madagascar — The devoted fans make their way to dusty outdoor rings surrounded by grass huts and palm trees. They take their seats on makeshift wooden benches and through song and lots of cheering, glorify the gladiators of moraingy, Madagascar’s brutal bare-knuckle fighting tradition.

Bouts are a blur of fists, elbows, knees and feet punctuated by the thud of vicious slugs and the smack of bodies hitting the ground. Whirling blows are exchanged for longer than seems possible to withstand.

Haymakers, kicks and punches are landed, absorbed and countered with equal ferocity. The fighters, known as fagnorolahy, perform a violent dance until someone gives up or is knocked down, or the referee identifies a winner.

“I don’t feel fear before a fight,” said Rocky Ambanza, a local star of the game. “If you feel fear, you have already lost. But you must not underestimate your adversary.”

Few opponents would underestimate Mr. Ambanza, 28, whose compact body is marked by scars and scratches. His power, speed and technique, combined with his confident swagger and aggression, made him a crowd favorite during a recent moraingy (pronounced more-AIN-gee) match in Sambava.

The city, in the northeastern Sava region of Madagascar, is the world capital for vanilla production. The soaring global price for the flavor has boosted the local economy in recent years, and the infusion of money has added a commercial component to the centuries-old form of hand-to-hand combat.

Winners of moraingy bouts earn cash as well as prizes that can include stereos, televisions, bikes and even cars.

The traditional sport has changed in another way, too. Typically it was pursued by unmarried men between the ages of 10 to 35. Now, women are increasingly taking part, both as combatants and managers.

“My husband loves moraingy, so with the money we’re making from the vanilla trade, we put fighters on a monthly contract and host the events,” said Maria Hadjee, whose family business sponsors a moraingy team in Sambava with a half a dozen male fighters and a coach.

The team travels the region by minivan, drumming up attendance by driving around the dirt roads of the towns they visit and announcing over loud speakers the next day’s combat against rival clubs. The fighters sometimes set up the smaller venues themselves. 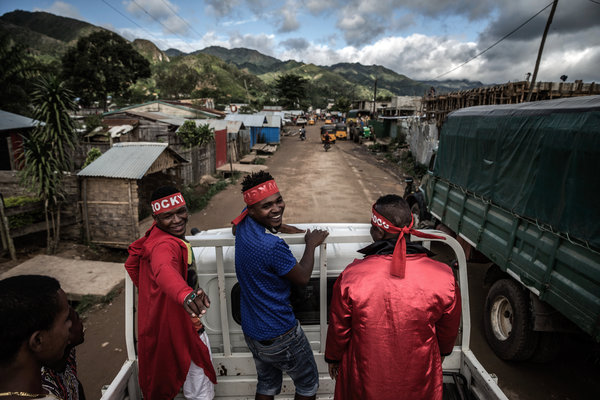 The combat that follows becomes a marker not only of strength and courage, but also of character, especially in the face of a loss.

Rules vary from region to region, but victory is not possible without maintaining certain critical social attitudes and principles, according to Ernest Ratsimbazafy, the author of “Martial Arts of the World: An Encyclopedia of History and Innovation.”

“Premier among these is self-control,” he wrote. “Fear of punches must be overcome, calm must be maintained, and revengeful feelings must be avoided.”

In Madagascar, people often prefer indirect forms of confrontation — through proverbs or through spreading rumors of witchcraft, for example, said Sarah Osterhoudt, a professor of anthropology at Indiana University.

“Harmony is very important, and there’s this idea of collective action over individual action, so anything that allows people to confront things in a ritualized way softens that confrontation,” Professor Osterhoudt said. “Fighting could be a way of doing that within a predictable format.”

At a recent match in Sambava, ropes were suspended on posts over a patch of dirt in an empty lot, flanked by towering speakers thumping out Malagasy pop tunes, replacing the drums that provided the soundtrack to moraingy fights in former times. Female cheerleaders in short shorts and crop tops gyrated to the beat.

Some 2,000 spectators, who paid about a dollar each, filtered through a narrow gate and filled seats or climbed walls, trees and nearby buildings to get a clear view. The crowd was well supplied with alcohol, and young men’s cheeks bulged with khat, a leafy plant chewed for the mild high it provides.

Once the arena was packed, the fagnorolahy entered and strutted around the ring, taunting their opponents with glares, clenched fists and menacing gestures. Despite this theatrical provocation and showboating, the atmosphere among fighters is one of camaraderie, reflecting moraingy’s role as a male bonding tradition.

Soon, Mr. Ambanza entered the ring. A teammate tied a red rope amulet around his bulging right biceps, and his coach smeared Vaseline on his bruised cheekbones before he slipped under the ropes to face his adversary.

On the referee’s signal, the two fighters circled one another, feinting and jabbing. Mr. Ambanza ducked under a sweeping right hook and unleashed a devastating uppercut that lifted his opponent off his feet and dropped the dazed fighter to the ground. The crowd roared. Mr. Ambanza raised his fists to the sky, eyes closed.

Despite the drubbing the bouts can deliver, moraingy fighters often take on three or four different opponents in an afternoon. Each contest consists of one to three rounds lasting less than a minute.

Mr. Ambanza’s knockdown was one of the day’s highlights. On his victory lap, he bumped fists with his coach and ventured into the crowd, where fans dropped bank notes into a plastic shopping bag he held out.

Such modern trappings aside, moraingy remains rooted in its past as a corporeal expression of Malagasy society.

“It is about more than the fighting,” said Aboudou Matchimoudini, the coach of Boîte Noir de Diego, one of Madagascar’s more competitive clubs. “It’s our culture and our tradition, our history.”

That history dates back as far as the 15th century. The fighting tradition spread across the country and to other islands off the southeast coast of Africa, including the Comoro Islands, La Reunion, the Seychelles and Mauritius.

While the fights are ferocious, the rituals around the sport encourage mutual respect. The winner bear hugs his opponent, briefly lifting him off the ground before the gesture is reciprocated. The victor is cheered, but so is the vanquished.

As Mrs. Hadjee’s fighters gathered for an afternoon workout at a local soccer stadium, three goats nibbled on a lone patch of dry grass near midfield. After the workout, the players stopped for rice and soup at a roadside restaurant.

The fighters may earn a few hundred dollars a month, which is enough for Mr. Ambanza, who first saw a moraingy match at age 15, and immediately began training.

“I’ve been fighting for 10 years and I’m earning enough to live on,” he said. “The only problem right now is that I have a broken rib.”