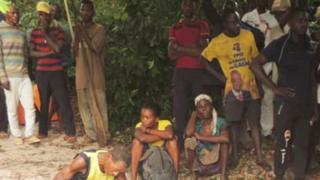 Wooden passenger boats that are more than five years old are to be banned from a lake in the Democratic Republic of Congo where hundreds of people are feared to have drowned at the weekend.

Some 45 people are known to have died when an overcrowded boat sank on Lake Mai-Ndombe. About 200 remain missing.

The partial ban on older wooden vessels was announced by a provincial governor.

DR Congo sees frequent boat accidents on its waterways, which are a popular means of transport across the country.

The country, which is about the size of mainland western Europe, has a poor road network, and large areas are inaccessible except by air or boat.

Many of the passenger ferries on its lakes and rivers are poorly maintained and overloaded.

The latest accident took place on Saturday evening in Mai-Ndombe province in western DR Congo, involving a type of flat-bottomed wooden vessel known as a balieniere or whaler.

On Monday, provincial governor Antoine Masamba announced on the Talk Congo radio station that all such boats that were more than five years old would be banned from the lake. It is not clear when the ban will come into force, nor how many vessels will be affected.

According to the governor, the boat had been carrying some 400 passengers, of whom 45 were confirmed dead and 200 were still unaccounted for.

The vessel was not meant to carry more than 80 people. Its official manifest indicates that it had about 130 passengers.

According to the BBC’s Gaius Kowene in Kinshasa, the actual number of people travelling aboard the boat was much higher because it had taken on additional passengers along its route.

The vessel, bound for Boliangwa, sank almost 30km (18 miles) from the town of Inongo, its point of departure and the capital of Mai-Ndombe Province.

The mayor of Inongo, Simon Mboo Wemba, said the captain of the vessel had been arrested. He said most of the passengers on board were teachers, going to collect their salaries.

Last month, at least 167 people died in two boat accidents on Lake Kivu. This prompted Felix Tshisekedi, who became president in January, to make it mandatory for passengers to wear life jackets.

But it is not clear if those on the boat that sank on Saturday were wearing any.