DAKAR, Senegal — In the most controversial scene of “Mistress of a Married Man,” a hugely popular new television series in Senegal, the show’s protagonist, Marème, dons a daring magenta pantsuit and heads out for a date with a married man — but not before pointing below her belt.

“This is mine,” she tells her best friend. “I give it to whomever I please.”

The series, which debuted in January, has quickly reached a “Sex and the City” level of popularity, setting off a fierce debate over contemporary womanhood in a largely Muslim West African nation that like much of the region, is urbanizing at breakneck speed. The pilot alone has received more than three million views on YouTube, a number nearly equivalent to the entire population of Senegal’s capital region.

In a country where women’s sexuality has often been hidden behind a culture of discretion, Marème’s pronouncement, fans say, was nothing short of rebellion. And it fits into a larger movement by women to assert their independence. The show takes on not just feminine desire, but also rape, mental illness, male power, domestic violence and the jealousies that arise out of polygamy.

It is part of a burst of woman-driven television and film production across Africa in which writers, producers and actors openly assert female sexuality, challenge traditional gender roles and present distinctly African stories to African audiences.

There has been some pushback, from both official sources and everyday viewers. In Senegal, a state regulator has threatened a broadcast ban of “Mistress of a Married Man,” citing content likely to harm the “preservation of cultural identities.”

Netflix, which arrived on the continent in 2016, has two woman-driven series in the works in Africa, one about a female spy, the other about a girl uncovering her family’s secret past. 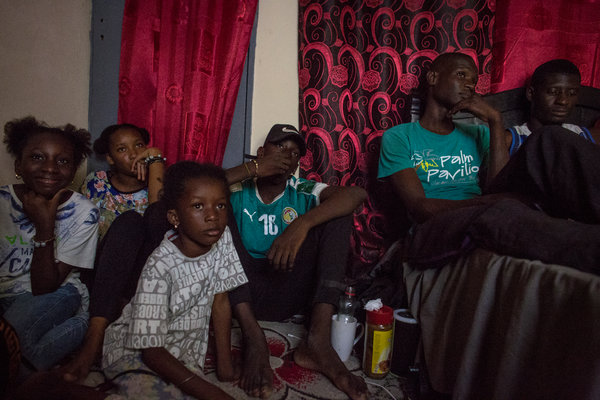 And in Kenya, “Rafiki,” from the director Wanuri Kahiu, chronicles a romance between daughters of rival politicians in a country where being gay is illegal. Officials initially banned the film, but it screened to sold-out Nairobi audiences after a judge ordered a temporary reprieve.

“Mistress of a Married Man” airs twice a week on YouTube and on the channel 2STV. It is the brainchild of Kalista Sy, 34, a former television journalist who wrote the pilot after typing “How do you write a script?” into Google.

The show is loosely centered on Marème Dial, played by Halimatou Gadji, and four other women, many of whom work at SenegIndia, a real-life construction company building a real-life city outside of Dakar that has become a symbol of the region’s rapid growth. SenegIndia is one of the show’s major sponsors.

Besides Marème, who is sleeping with Cheikh, there is Racky, a construction supervisor who wears a hard hat and is propositioned by her boss; Djalika a successful professional with an abusive, alcoholic husband whom she eventually divorces; and Lalla, Cheikh’s wife, who spirals mentally when Cheikh eventually takes Marème as a second wife. (There is also a woman named Dior who is a lesser player.)

At her home in Dakar’s Ouest Foire neighborhood, Ms. Sy said she had grown tired of female characters written by men, or by outsiders. She wanted to see the women she knew — their good sides, their bad sides, their complexity — depicted onscreen.

“I’m doing something very Senegalese,” she said. “It’s for Senegalese people first, then for the world.”

Senegal, a nation of about 16 million people that is pushing to become a top economic player in the region, practices a form of Islam that President Macky Sall has called moderate and tolerant. In public, many women are free to run along the beach in tank tops, go to university and lead professional lives. But in the home, men often retain power.

Some men take two wives, or more, but for women, sexuality often remains hidden behind a culture of “sutura” — a Wolof term suggestive of discretion and modesty.

The country has a rich cinematic tradition, but television has often been dominated by series from the United States, telenovelas from Latin America and programming from Nollywood, in Nigeria.

In the last decade, stations have begun to favor local work, but those shows have been written mostly by men. And they often present women in subservient roles, with characters going to great effort to keep their husbands, regardless of abuse or cheating, notes Marame Gueye, a Senegalese professor who teaches African literature at East Carolina University.

Ms. Sy grew up in a traditional Fulani family. She started writing “Mistress of a Married Man” as a serial novel on a group Facebook page; it was later picked up by a production company called Marodi TV.

Now, she is recognized across Dakar. Her husband, Medoune Diop, 37, a computer scientist who lives most of the time in France, said he delighted in hearing the show discussed by members of the Senegalese diaspora on the streets of Rennes, France, almost 2,500 miles away.

Ms. Sy’s characters, at her direction, favor Senegalese designers — wearing fluted blouses and colorful prints from NuNu and Sisters of Afrika — and natural hairstyles; they reject the practice of skin bleaching. They also speak Wolof, the language preferred by many in what is officially a Francophone nation.

“It has opened the curtain on Senegalese society,” said Seynabou Diop, 23, the show’s assistant camerawoman. “We are showing things that have not been shown before.”

Fans cut across age, class and gender lines. In Dakar — at oceanside fruit stands, in small kiosks and inside homes — many people said that the show’s popularity reflected a deep desire to see reality depicted onscreen.

“I never miss it,” said Mbayang Gueye, 29, who lives with her son and an extended family in a small home in Dakar’s Médina neighborhood.

Marème has emerged as a wildly popular figure, among both men and women. Families watch the show together, crowded around fuzzy television screens. Teenagers copy Djalika’s hairstyles. Men see themselves in Cheikh’s marital conundrum. Facebook is full of groups dedicated to “Team Racky” and “Team Marème.”

But not all Senegalese are so enamored.

After reviewing Marème’s “this is mine” scene, the country’s broadcast regulator sent out a notice warning that the program presented “words, behavior and images that are shocking, indecent, obscene or offensive” and said it could be pulled from the air.

And this year, a Muslim group influential in Senegal, Jamra, threatened to march in protest of the show. In an interview at his home, Jamra’s vice president, Mame Mactar Gueye, congratulated Ms. Sy for creating “a mirror of Senegalese society,” but he said he wished she had crafted the narrative to discourage infidelity, rather than apologize for it.

Even some fans have cringed at the more explicit moments. Ndeye Madjiguene Sambe Dieng, 60, a retired teacher, said she thought some of the clothing was too revealing.

One Thursday in mid-August, a small crew filmed one of the final scenes of the season.

As they began to shoot — two lights, one camera, a simple affair — fans stopped Ms. Gadji to ask for pictures. They included a man in a gold robe holding a Quran, and a trio of women in their 20s who had come to the airport to apply for jobs.

“Are you Marème?!” they asked.

“People say that I am perverting the youth,” Ms. Gadji said in a moment away from the cameras. “But I don’t think so. I am only reminding them that everyone is free to do what they want with their own sexuality.”

Later, the crew moved to the new city outside Dakar to film more of the show’s final scenes. Racky is about to get married, but first a friend of her father’s wants to tell her a family secret. They meet in an isolated location, but (spoiler alert) when the man makes a move on her, she picks up a rock and kills him.

For all its success, it is unclear if the show will return for a second season. And Ms. Sy said that if it did, she feared she would lose control of the narrative to male producers. She wants to pair the second season with a magazine, she said, but it’s unclear how she would get the money to do that.

The show’s commercial director, Julia Cabrita Diatta, called funding a “constant challenge,” and said some major advertisers had backed away from the show after deciding it was too controversial.

The final episode aired just hours after filming wrapped, and in the neighborhood of Médina, the sandy streets began to quiet as families settled around televisions. “Salaam alaikum,” neighbors greeted one another, as they filed into living rooms and bedrooms to watch.

In one bedroom, Ms. Gueye, the 29-year-old fan, took the seat closest to the television. She barely moved her eyes from the characters for the next 70 minutes.

“It’s so good,” she said. “I will miss them and be lonely without them.”