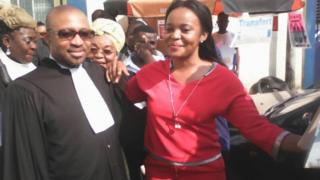 The Cameroon government has dropped charges of fake news levelled against a prominent TV journalist from an Anglophone region.

Mimi Mefo Takambo was arrested after sharing reports on social media alleging that the military was behind the death of an American missionary.

The military says the case was shelved on the orders of President Paul Biya.

Over the last two years, Anglophone areas have been hit by unrest in the majority French-speaking country.

Some English-speaking groups complain of discrimination and are pushing for a separate state.

Ms Mefo, head of English news at the privately owned Equinoxe Television and Radio, was arrested on 7 November on charges of “publishing and propagating information that infringes on the territorial integrity of the Republic of Cameroon”.

She had posted on her Twitter account that US missionary Charles Trumann Wesco was shot dead by soldiers. He was killed in October near Bamenda in the north-west, one of two Anglophone regions.

Her lawyer said that his client had also posted the military’s account – that he had been killed by Anglophone separatists.

An army spokesman said the president had decided to stop the prosecution – by a military tribunal – as “a gesture of magnanimity”.

She had been freed on 10 November and charges dropped two days later. Local and international media campaign groups had called for her release.

Before her arrest, Ms Mefo had complained of receiving several threats over her reporting of unrest in English-speaking regions.

The separatist issue was thrown into sharp relief by the kidnapping of 82 people, nearly all schoolchildren, from near Bamenda, the capital of the north-west region, on 4 November.

It is still unclear who exactly seized the group. The government blamed Anglophone rebels but they denied involvement.

The last four of those held – the principal, one teacher and two students – were freed on Monday.

According to the International Crisis Group, voter turnout in the two Anglophone regions was as low as 5%.