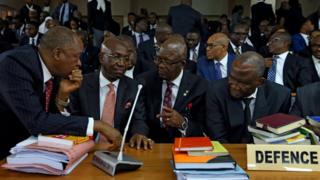 International observers have expressed concern about the suspension of Nigeria’s chief justice – just three weeks before a general election.

He is facing charges for allegedly failing to declare his personal assets before taking office in 2017.

But the EU, UK and US have taken serious issue with his removal, suggesting it could “cast a pall over the electoral process”.

Mr Buhari’s decision has been called “an act of dictatorship” by his main challenger in next month’s election, Atiku Abubakar.

Opposition politicians have halted campaigning in protest at the president’s decision to suspend the head of the Supreme Court.

President Buhari, who is seeking a second term, has often accused the judiciary of frustrating his anti-corruption fight.

However, no details have been given on the reasons behind the move.

Why the international pressure?

As the head of the judiciary, Nigeria’s chief justice plays a vital role in settling election disputes.

The charges against the top judge and his subsequent suspension just before elections are widely seen as politically motivated.

The suspension came less than 24 hours before Mr Onnoghen was scheduled to swear in members of election tribunals.

“The decision to suspend the chief justice has led to many Nigerians, including lawyers and civil society observer groups, to question whether due process was followed,” said the EU Election Observation Mission (EU EOM) in a statement.

The US embassy said it was “deeply concerned” at the decision to replace Judge Onnoghen “without the support of the legislative branch on the eve of national and state elections”.

The British High Commission also expressed “serious concern over the suspension”, saying in a statement: “It risks affecting both domestic and international perceptions on the credibility of the forthcoming elections”.