That was a little over two years ago.

Last week, shortly after he was anointed president-elect, Mr. Tshisekedi said he “paid tribute” to Mr. Kabila, describing him as “a partner for change, not an enemy.”

While the situation in Congo remains fluid after an election that most independent observers, including the Roman Catholic Church, consider to be illegitimate, one thing does seem certain: In the absence of intense international pressure or a determined domestic uprising, the Kabila government seems likely to continue running the country in everything but name.

“Kabila is in a very comfortable position,” said one presidential adviser, speaking on condition of anonymity because he was not authorized to speak publicly. “He was very upset over the results, as we all were, but we still retain power.” 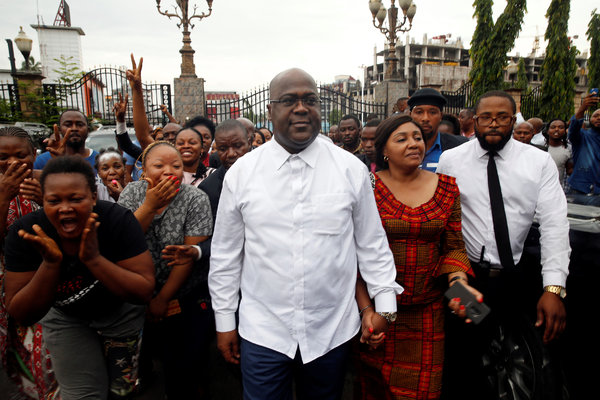 The government came under a degree of pressure on Sunday from the Southern African Development Community, which had sent election observers to monitor the vote. The group, which has stopped short of congratulating Mr. Tshisekedi, demanded “a recount that would provide the necessary reassurance to both winners and losers.” It also called for a unity government “given the strong objections to the provisional results.”

Martin Fayulu, the opposition candidate whom many consider the real winner, is contesting the results and has filed an appeal at the Constitutional Court, demanding a manual recount of votes. Election officials deny that the vote was rigged and have threatened to annul the election if it is rejected by foreign powers, some of them openly critical of the outcome.

Most analysts expect the Constitutional Court to validate Mr. Tshesekedi’s election, and the inauguration is planned for Jan 22. What happens next is hard to predict.

There have been few reports of violence despite repeated warnings, in a country that has never seen a peaceful transfer of power, let alone one through the ballot box. (Mr. Kabila himself became president after his father, a rebel leader turned head of state, was assassinated.)

The residents of Kinshasa have gone about their business, despite an internet shutdown that has now lasted three weeks — the government said it was intended to stop the spread of false information and speculation before the election, but critics say it was a move to prevent opponents from organizing demonstrations. The city’s traffic is as chaotic as ever, and yellow minibuses zoom past billboards advertising skin-bleaching creams and “American water.”

There seems little appetite for the sort of violent uprisings that Congo has seen in the recent past. Throngs of supporters ambled Sunday in front of the headquarters of Mr. Tshisekedi’s party, the Union for Democracy and Social Progress, rebuilt after the attack two years ago. “It was shocking,” recalled Dady Mutahali, 42. “We wish for these things to never repeat again.”

Looking ahead, the most probable scenario, analysts say, is that the Constitutional Court, presided over by Mr. Kabila’s former chief of staff, will receive Mr. Fayulu’s appeal but rule that it is unfounded. Mr. Fayulu is required to gather evidence, like counting tally sheets from thousands of polling stations — a task made even more difficult by the shutdown of the internet. It is unclear whether he can manage this in the limited time he has been given.

“The court is controlled by the regime, and is going to try give the semblance of credibility to justice,” said Israel Mutala, the editor in chief of 7sur7, a major news site in the country. Still, “there is some form of change,” he said, adding that Congo “has not yet reached democratic maturity, but it has crossed a threshold.”

Pierre Lumbi, an adviser to Mr. Fayulu, said in an interview that if the court rejected the opposition leader’s appeal, the party would call for peaceful demonstrations.

While Mr. Fayulu pursues his appeal, Mr. Tshisekedi, the son of one of the country’s most prominent opposition leaders, is negotiating with Mr. Kabila. The discussions include a possible grant of immunity for any alleged political and financial crimes, according to analysts and some news reports.

The government has denied those reports. Mr. Tshesekedi’s supporters say he is a strategist who is simply biding his time before consolidating power and making changes.

Mr. Kabila has always denied wrongdoing, but he and his family have long been dogged by reports of fortunes squirreled away in offshore holdings. Some of his entourage, including the man he chose as his successor, Emmanuel Shadary, are listed on European and American sanctions lists.

But the elections forced Mr. Kabila to choose between two opposition figures, and Mr. Tshisekedi was considered to be more palatable than Mr. Fayulu because of his backers, analysts said. Mr. Fayulu had the support of two prominent opposition figures who were themselves barred from running for office, one for a war crimes-related conviction and the other for what supporters dismissed as manufactured criminal charges. One of them, Moïse Katumbi, a billionaire in exile in South Africa, was once an associate of Mr. Kabila but became his sworn enemy, apparently after falling out over a business deal.

A Fayulu victory would have meant a victory for Mr. Katumbi, Mr. Mutala said, adding, “The president and his political family have made it clear that Moïse Katumbi will never accede to power.”

Mr. Kabila’s party dominated legislative elections that took place at the same time as the presidential vote. That gives it a majority in Parliament and the power to appoint a prime minister, who in controlling cabinet appointments arguably wields greater power than the president.

Mr. Tshisekedi would be likely to make concessions, analysts said, such as leaving to Mr. Kabila’s party plum ministries like the security forces, mining and finance, areas that President Kabila and his entourage are said to have capitalized on to amass extraordinary wealth over the years.

To provide incentives for President Kabila to step down, the Parliament has approved a number of perks for former presidents, including a large measure of legal immunity and the designation of senator for life. “The architecture is built for Kabila to retain huge influence even outside the presidency,” wrote Hans Hoebeke, a Congo analyst at the International Crisis Group, in a report in August.

“Joseph Kabila,” another analyst, Adeline Van Houtte, with the Economist Intelligence Unit, said, “is likely to become the future Senate president, which means he would retain significant control.”

Nevertheless, he said, “we need to work together to build the future.”

President Kabila may be forced to make certain concessions, such as giving up his vast holdings of land, property and businesses across the country, Mr. Mutala said. President Kabila, according to Jeune Afrique, an online magazine, is expected to remain in his presidential palace while Mr. Tshisekedi would live in the current residence reserved for the prime minister.

Mr. Tshisekedi, for his part, said that one of his first actions would be to return the remains of his father, Etienne Tshisekedi, whose corpse has been languishing in a morgue in Belgium since his death two years ago.

Tshisekedi père, as some call him affectionately, was so popular for having fought Mobutu, a dictator and kleptocrat backed by the United States, that the Kabila government worried that bringing back his body would be enough to trigger a popular uprising.

But few Congolese want to see a repeat of the large-scale violence that erupted after elections in 2006 and 2011, as well as 2016, when President Kabila refused to step down after his constitutionally-mandated two-term limit ended. He finally did last year, putting forward Mr. Shadary, who was dealt such a spectacular defeat that Mr. Kabila was forced to choose between the two opposition candidates in an effort to avoid sparking widespread unrest and outright international condemnation.

“The Congolese aspire to peace,” said Mr. Mutala. The economy has languished in a country that, paradoxically, is rich in natural resources, but most of its population lives on about a dollar. The killings of hundreds of protesters over the years have exhausted a nation traumatized by state-led violence and impoverishment, he said.

“In the name of peace, they are ready to close their eyes on some irregularities that have marred the electoral process,” Mr. Mutala said. “Politics in Congo is a game that is exciting, but dangerous,” he said, adding after a pause. “Very dangerous.”