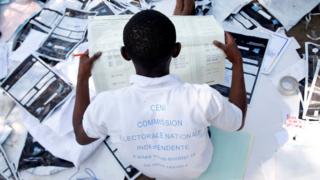 The Democratic Republic of Congo has blocked the signal of a TV station seen as close to the opposition.

This comes days after the internet was shut down nationwide.

The opposition has complained of irregularities in the election to find a successor to President Joseph Kabila.

He is stepping down after 17 years in office and has promised DR Congo’s first orderly transfer of power since it gained independence from Belgium in 1960.

Along with blocking Canal Congo, the authorities have also cut the broadcasts of Radio France Internationale (RFI) and withdrawn the accreditation of one of its journalists, Florence Morice, accusing her of violating electoral law.

“We are not going to let a radio station throw petrol on the flames at a time when we are waiting for the compilation of the provisional results,” Mr Mende told AFP.

RFI has denied the accusation and defended its journalist.

Counting is under way and provisional results were initially expected to be announced on 6 January, but the electoral commission now says there could be a delay, Reuters reports.

The head of the commission, Corneille Nangaa, said counting centres were still waiting for more than 80% of voting tallies to be submitted by local polling stations.

What are observers saying?

Regional monitors – from the African Union and the Southern African Development Community – have described last Sunday’s election as “reasonably well-managed”.

But the Roman Catholic Church’s observer team reported more than 100 cases of election monitors being denied access to polling stations.

Another local observer group, Symocel, said some of its 20,000 agents were subjected to intimidation.

There are 21 candidates, but three frontrunners:

Why was the internet shutdown?

The internet has not been working since Monday and neither have people been able to send SMS text messages.

But the governing coalition, the Common Front for the Congo, said the internet outage was having an impact on the compilation of results. 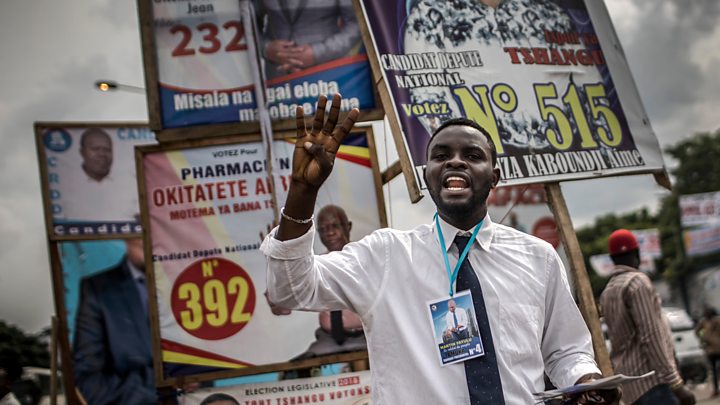 Mr Kabila took over from his assassinated father Laurent in 2001, but he was barred from running for another term under the constitution.

He was supposed to step down two years ago, but the election was postponed after the electoral commission said it needed more time to register voters.

The decision triggered violent clashes, as the opposition accused Mr Kabila of trying to cling on to power.

The run-up to the poll was also hit by controversy over the exclusion of some 1.26 million out of an electorate of nearly 40 million from voting.

The electoral commission said voting could not take place in the eastern cities of Beni and Butembo because of a deadly Ebola outbreak in the region. Voting was also called off in the western city of Yumbi because of insecurity there.