E.S. Reddy, an Indian-born acolyte of Gandhi who spearheaded efforts at the United Nations to end apartheid in South Africa, died on Sunday in Cambridge, Mass. He was 96.

His death was announced by President Cyril Ramaphosa of South Africa, who hailed Mr. Reddy’s “commitment to human rights” and his epitomizing “social solidarity.”

From 1963 to 1984, Mr. Reddy oversaw the U.N.’s efforts against apartheid first as principal secretary of the Special Committee Against Apartheid and then as director of the Center Against Apartheid.

He campaigned for boycotts and other economic sanctions against the white South African government, which segregated and oppressed Black people and subordinated the country’s large population of Indian immigrants.

He also lobbied relentlessly for the release of Nelson Mandela, the imprisoned anti-apartheid leader who was finally freed in 1990 and then elected South Africa’s first Black head of state four years later.

“There is no one at the United Nations who has done more to expose the injustices of apartheid and the illegality of the South African regime than he has,” Sean MacBride, a former U.N. commissioner for Namibia and a Nobel Peace Prize winner, said of Mr. Reddy in 1985.

In a 2004 interview for the book “No Easy Victories” (2007), Mr. Reddy, influenced by Gandhi’s strategy of nonviolent resistance to India’s British colonial rulers, explained the genesis of his interest in South Africa:

“I was already interested in the anti-apartheid movement in the 1940s, when the struggle in South Africa took on new forms and Indians and Africans were cooperating in the struggle. During the Second World War, the United States and Britain talked about four freedoms in the Atlantic Charter, but those freedoms didn’t apply to India or South Africa.”

The vast pool of Indian contract workers who had immigrated to South Africa starting in the late 19th century had found common ground with Black citizens as another oppressed minority there. India was among the first countries to join what became an international movement to isolate South Africa through commercial and cultural boycotts, and to exert economic leverage by pressuring corporations, universities, foundations and pension funds worldwide to divest themselves of holdings in South African companies.

“He had to face many obstacles and antagonisms, coming from the Western Powers mainly,” Mr. MacBride said, “but he had the skill, courage and determination necessary to overcome the systematic overt and covert opposition to the liberation of the people of Southern Africa.” 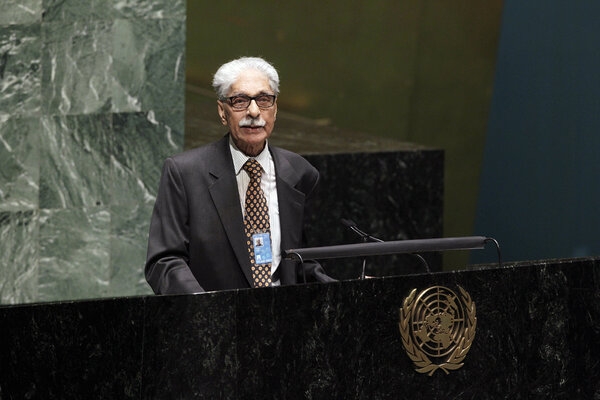 Enuga Sreenivasulu Reddy was born on July 1, 1925, in Pallapatti, a village in southern India about 90 miles north of Madras. His father, E.V. Narasa Reddy, ran a mining company that exported mica. His mother was a homemaker.

His father was jailed for participating in Gandhi’s protest campaigns, and his mother sold her jewelry to raise money for Gandhi’s efforts on behalf of India’s lowest caste, the so-called untouchables. Enuga himself led a strike as a high school student.

After graduating from the University of Madras in 1943, he intended to earn an advanced degree in chemical engineering in Illinois, but the shortage of ships immediately after World War II delayed his arrival in the United States until the middle of the semester.

When he finally did arrive, in New York, he decided to stay in the city, deciding that he could better keep abreast of events in India from there. Having forgotten by then much of the math he had learned as an undergraduate engineering student, he switched to political science and earned his master’s degree in the subject from New York University in 1948. He continued his studies at Columbia University.

He married Nilufer Mizanoglu, a translator of the poet Nazim Hikmet. She survives him, along with their daughters, Mina Reddy and Leyla Tegmo-Reddy; four grandchildren; and three great-grandchildren.

Utterly broke after a two-month U.N. internship, Mr. Reddy was hired by the then-fledgling United Nations in 1949 to conduct research as a political affairs officer.

In the late 1940s, he became active in the Council on African Affairs, a group led by Paul Robeson and W.E.B. Du Bois. It initially drew mainstream progressive support but faded after the government declared it a subversive organization in 1953 because some of its leaders had Communist ties.

By then, India had gained its freedom from the British, a moment, Mr. Reddy said, that should have been the beginning of the end of colonialism.

“I had a feeling that I did not do enough,” he said in the 2004 interview. “I did not make enough sacrifice for India’s freedom, so I should compensate by doing what I can for the rest of the colonies.” When he joined the U.N., he added, “that feeling was in the back of my mind.”

After he retired in 1985, by then holding the title of assistant general secretary, Mr. Reddy wrote histories of the Black liberation and anti-apartheid movements and the links between India and South Africa.

He was awarded the Joliot-Curie Medal of the World Peace Council in 1982. In 2013, he received the Order of the Companions of O.R. Tambo from the South African government, an honor named for the former African National Congress president-in-exile.

When Mr. Reddy celebrated his 96th birthday last July, the Ahmed Kathrada Foundation, a South African organization opposed to racism and corruption, congratulated him for a lifetime of “working tirelessly in support of the liberation movement” and “forging an unshakable bond between South Africa and his homeland, India.”