Dozens remain missing as rescuers retrieve the bodies of 24 miners from two flooded mine shafts west of Harare. 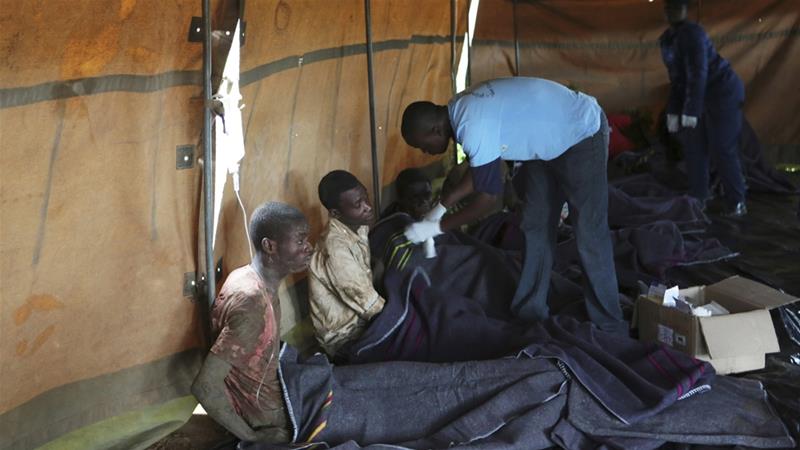 Eight miners have been rescued from two flooded mine shafts west of the Zimbabwean capital, Harare, officials have said, although dozens more miners are still missing and feared dead.

“So far we have managed to bring out eight miners alive and we are yet to assess and find any more people down there who are still alive,” Tapererwa Paswavaviri, the government deputy chief mining engineer told reporters on Saturday at the scene of the accident.

The rescued miners were whisked away by officials, while rescuers briefly stopped operations due to rain.

Rescue workers also retrieved the bodies of at least 24 miners on Saturday and dozens more are still missing.

The government said on Friday that between 60 and 70 “artisanal” miners were in the two shafts when they were flooded after a dam burst its walls following heavy rains on Tuesday.

The accident in Battlefields, 175 km (109 miles) west of the capital, shines a light on the dangers facing artisanal gold miners.

A study by parliament cited by the state-owned Herald newspaper showed that artisanal and small-scale miners may have contributed more than half of the 24.8 tonnes of gold Zimbabwe produced in 2017.

Battlefields and surrounding areas are rich in gold deposits and popular with artisanal miners, known locally as “Makorokoza” or hustlers, who use picks and shovels and generator-powered water pumps. The makeshift shafts and tunnels they work in can easily collapse during the rainy season when the ground is soft.

The mining pits are dotted around a clearing some 8km from the main dirt road. On the edges are shacks made of plastic which serve as accommodation for those digging for gold.

Zimbabwe is the throes of a deep economic crisis, the worst in a decade.

Annual inflation shot to 56 percent, up from 42 percent in December 2018, according to official statistics released Friday, the biggest increase in a decade. Economists say that, in reality, prices have gone up more than three-fold in recent months.

Formal unemployment is estimated at over 90 percent and artisanal gold mining, mostly in mines long abandoned by big corporate organisations, is widespread and provides a source of income for many.

Artisanal mining is not banned outright in Zimbabwe, although it is largely unregulated.