JOHANNESBURG, South Africa — Firefighters in Cape Town on Monday were battling a wildfire that had engulfed the slopes of the city’s famed Table Mountain and destroyed parts of the University of Cape Town’s archival library.

Helicopters dumped water on the area in an effort to contain the blaze, which began on Sunday and was most likely caused by an abandoned campfire, according to South African National Parks officials. But as wind picked up strength overnight — fanning the flames — the fire spread to neighborhoods in the foothills of the mountain and forced some homes to be evacuated on Monday morning. 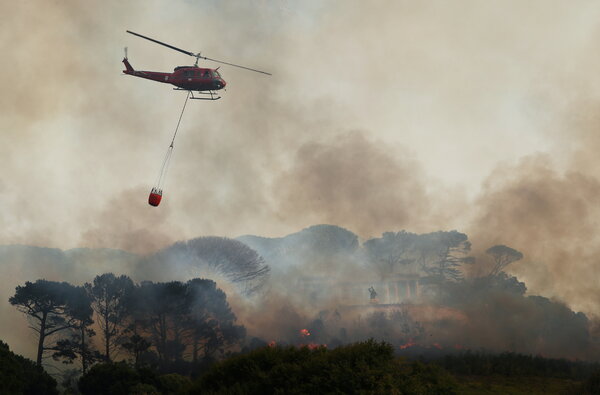 Anton Bredell, the minister in charge of environmental affairs and development planning for the Western Cape region, said in a statement, “The wind speed is expected to increase during the day which may impact on the deployment of aerial firefighting.”

“The helicopters cannot fly if the wind is too strong and the visibility too poor, but the situation will be fully assessed,” he added. “It is going to be a very tough day.”

The wildfire began around 9 a.m. Sunday on the lower slopes of Devil’s Peak, one of the rugged hills in Table Mountain National Park that overlooks central Cape Town. Fanned by gusts of wind, the fire engulfed and destroyed a hillside restaurant and a mill before moving down to the university campus, which is largely built on the slopes of the mountain.

Several buildings, including the school’s library, which houses important archives and book collections, were soon alight, and billows of thick white smoke rolled across the city. So far, there have been no reported fatalities, but five firefighters have suffered injuries, according to officials.

Around 4,000 students were evacuated from campus residence halls on Sunday, according to a university spokeswoman. The university announced on Sunday that it would suspend its operations until at least Tuesday.

Videos on social media showed scores of students, some clutching small bags, rushing from residence buildings as the fire engulfed the nearby hillside. Busisiwe Mtsweni, an undergraduate studying finance and accounting, was on the university’s upper campus at around noon, when “everyone got into panic mode,” she said in a telephone call.

Sparks from the mountain set off smaller fires among the buildings, and billows of smoke made it difficult to breathe, she said. When Ms. Mtsweni and her friends made a dash to their residence to grab their belongings, they came across a student suffering what appeared to be an asthma attack and led her, coughing, away from the smoke-filled part of the campus, she added. Ms. Mtsweni was later evacuated from the campus by bus and spent the night in a hotel.

While the university had recently begun a huge effort to digitize the school’s collections, only a “wafer thin” proportion of the special-collections archive had been transferred, according to Mr. Zimmer, who has led that program. Still, university officials said they were hopeful that the bulk of the archive — which is housed in two basement layers beneath the library and protected by a system of fire doors — may have been be spared.

Ujala Satgoor, executive director of libraries at the University of Cape Town, said in a statement, “Some of our valuable collections have been lost, however a full assessment can only be done once the building has been declared safe.”