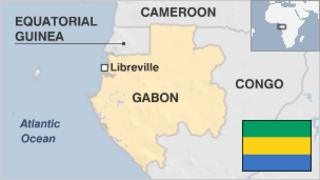 Gabon, located on the west coast of Africa, is one of the region’s more stable countries.

Since independence from France in 1960, Gabon has had just three presidents. Late President Omar Bongo ruled for more than four decades until his death in 2009.

During Omar Bongo’s rule, Gabon maintained a close relationship with France under a system known as “Francafrique”, receiving both political and military support in exchange for business favours.

But relations have cooled since his son Ali won a contested election in 2009 and French authorities launched a long-running corruption investigation into the family’s assets.

Gabon is a major oil producer but a third of its population live in poverty, according to the World Bank.

Ali Bongo was sworn in for a second seven-year term in September 2016, after Gabon’s constitutional court upheld his narrow victory in a bitterly disputed election.

Main rival Jean Ping described the court’s decision as a “miscarriage of justice” amid opposition claims of vote fraud.

Mr Bongo took over from his late father Omar Bongo, who ruled Gabon for 41 years until his death in 2009.

He has pledged to address some of the issues that have fuelled anger among the country’s 1.8 million people, like youth unemployment and over-reliance on falling oil revenues

But his presidency has been overshadowed by a long-running French investigation into allegations of embezzlement involving the Bongo family’s assets.

Born in 1959 in Brazzaville, Congo where his father was serving in the armed forces, Mr Bongo was educated in France.

Some key dates in Gabon’s history:

1958 – Gabon votes to become autonomous republic in the French Community.