ALGIERS — In a Moorish-style palace on the Algerian capital’s airy heights, the nation’s president proclaimed a new day for his country, saying it was now “free and democratic.” The old, corrupt system — in which he had spent his entire career — was gone, he insisted.

“We’re building a new model here,” said President Abdelmadjid Tebboune, 75, chain-smoking a pack of cigarettes in an hourslong interview surrounded by aides in his sumptuous office last month. “I’ve decided to go very far in creating a new politics and a new economy.”

But old habits die hard in this North African country that has known nearly 60 years of repression, military meddling, rigged elections and very little democracy. On the streets below Mr. Tebboune’s office, Algeria’s old realities are reasserting themselves.

The state jails dissidents and seats have been for sale — the going price was about $540,000 according to a parliamentarian’s court testimony — in the same Parliament that ratified Mr. Tebboune’s proposed new Constitution, drafted after he came to power in a disputed election in December. But the opposition is hobbled by a lack of leadership and a failure to articulate an alternative vision for the country.

A year after a popular uprising ousted the 20-year autocrat, Abdelaziz Bouteflika, and led the army to jail much of his ruling oligarchy, hopes are now fading for an overhaul of the political system and real democracy in Algeria.

“We are moving backward fast,” said Mohcine Belabbas, an opposition politician who played a major role in the uprising.

Today there are two political narratives in Algeria: the one from Mr. Tebboune, on high, and the one in the streets below.

The revolt in the streets that began last year, known here as Hirak, initially appeared to signal a new dawn in a country that had been stifled for decades by its huge military. But when the movement’s failure to coalesce around leaders and agree on goals created a vacuum, the remnants of the repressive Algerian state, with its ample security services, stepped in. 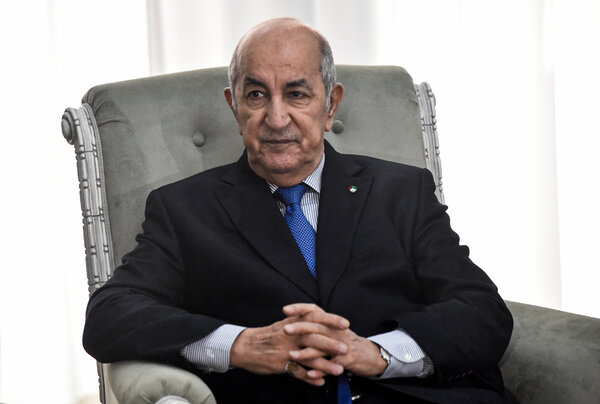 Other advocates for change in the Arab world looked on enviously as week after week, tens of thousands turned out peacefully to protest the continued reign of Mr. Bouteflika, who was left paralyzed after a stroke in 2013. It seemed that the abortive Arab Spring that began in late 2010 was finally being realized.

Algeria, an insular linchpin in the region, is the world’s 10th biggest producer of natural gas and is believed to have the second largest military establishment in Africa. It has been a key leader of nonaligned nations since it fought its way to independence from France 58 years ago.

The military established its pre-eminence in politics shortly after that, and has been at the forefront or just behind it ever since. A civil war with Islamists in the 1990s, in which as many as 100,000 were killed, helped consolidate its grip.

Soldiers in uniform are omnipresent in Algiers. But during last year’s demonstrations, Algerian security forces didn’t open fire on the Hirak protesters, the two sides instead staring each other down in a wary standoff.

Although the army eventually forced Mr. Bouteflika and his governing elite out of office, that was not enough for the protesters. They demanded a full overhaul of the country’s political class, elections for a new constituent assembly to replace the country’s discredited Parliament, and the army’s definitive withdrawal from politics.

They also deemed the army’s push for presidential elections premature. But the army’s all-powerful chief of staff, Ahmed Gaid Salah, overruled the movement.

Mr. Tebboune, once an ephemeral prime minister under Mr. Bouteflika, is believed to have been backed for the presidency by Mr. Gaid Salah. He was elected in a vote that opponents said drew less than 10 percent of the electorate; Mr. Tebboune said it was more than 40 percent.

He began with a few good will gestures, releasing some detained protesters. The pandemic stopped the demonstrations in March, and since then the government has played a cat-and-mouse game with Hirak’s remnants, releasing some and arresting others. Dozens have been arrested, according to an opposition group.

The pandemic has dovetailed with the national penchant for insularity, giving Algeria a further excuse to tighten its borders and keep out foreigners. The results are low infection and mortality rates, few mask-wearers and a near-total absence of outsiders on the crumbling streets of central Algiers.

The arrest and prosecution of one of the country’s best-known journalists, Khaled Drareni, 40, has hardened the mood in the streets and spread fear in the Algerian news media. The editor of a widely followed website, the Casbah Tribune, and a local correspondent for a French television station, Mr. Drareni covered Hirak with a mix of activism and detachment.

“The system renews itself ceaselessly and refuses to change,” he wrote during last year’s uprising. “We call for press freedom. They respond with corruption and money.”

That remark infuriated the authorities. On Sept. 15, he was convicted of “endangering national unity” and sentenced to two years in prison.

The scene outside the courthouse that day turned ugly.

“Khaled Drareni, independent journalist!” demonstrators shouted before the police poured in to disperse them. “Scram!” a muscular plainclothes officer barked at demonstrators. Officers roughly bundled a young woman and an older man into a police van.

“He didn’t even have a press card,” the president fumed during the interview, casting Mr. Drareni as an activist with dubious credentials. Mr. Drareni once interviewed Mr. Tebboune himself, though, as well as President Emmanuel Macron of France.

Mr. Tebboune insisted on an opposing narrative during the three-and-a-half-hour interview, saying his country was now “free and democratic.” He later made his normally reticent cabinet members available for interviews, and even demanded that the army chief of staff — who is never accessible to the media — agree to be interviewed.

“The army is neutral,” growled Gen. Saïd Chengriha, a grizzled veteran of the country’s 1990s civil war with the Islamists. He succeeded General Gaid Salah, who died of a heart attack in December.

“How do you want us to be involved in politics? We’re not at all trained in that,” said the general, 75, speaking in the military’s extensive compound in the heights of Algiers.

But decades of history are not so easily reversed.

The general and the president said they met at least twice a week to discuss the country’s situation, which is increasingly perilous because of a drop in oil prices. Well over 90 percent of the largely desert country’s exports consist of oil and gas, and with a heavy social expenditures bill, Algeria is estimated to need oil at $100 a barrel to balance its budget. The price has been hovering in the 40s.

Of one thing Mr. Tebboune is certain: The citizen protest movement is over.

“Is there anything left of the Hirak?” he asked dismissively during the interview.

He spoke of change, vaunting his new Constitution, which limits a president to two terms and recognizes the rights of the opposition, at least in the eyes of its supporters. But this week, the government threatened to strip Mr. Belabbas, the opposition politician, of his parliamentary immunity.

And for all the talk of a new Algeria, the president employed the old language of the autocrat when he discussed dealing with dissent.

“Everyone has the right to free expression — but only in an orderly manner,” he said. “It’s normal that someone who insults and who attacks the symbols of the state winds up in court.”

An Algerian revolt against the French 58 years ago failed for lack of a clear leader. That resistance to anoint a leader, a tactic to minimize repression, has now also weakened Hirak.

The activists who took a leading role have refused to engage with the deposed leader’s heirs, including the new president.

Behind high locked metal gates, watched from the sun-blasted street by plainclothes officers, Mr. Belabbas acknowledged that the protesters were clear about what they were against — the entire Algerian political system — but less so about what should replace it.

“We never succeeded in defining what we were for,” said Mr. Belabbas, who is head of the Rally for Culture and Democracy party and a member of Parliament.

Caught in the middle are ordinary Algerians — skeptical of Mr. Tebboune’s claims of renewal and of his new Constitution, deflated by the demise of Hirak and angry about the imprisoned Mr. Drareni.

“So, there’s a journalist who speaks. You put him in prison. And that’s supposed to be democracy?” asked Isa Mansour, who runs a small clothing store in the working-class neighborhood of Belouizdad, where the Nobel Prize winner Albert Camus grew up 100 years ago.

“The citizens are fed up with all these promises,” he said. “You can’t expect reforms from the old guard. Algeria is still looking for democracy.”