NAIROBI, Kenya — Paul Rusesabagina, the prominent dissident who was portrayed in the Oscar-nominated movie “Hotel Rwanda,” is being denied food and medicine in a prison in Rwanda where he is being held on terrorism-related charges, according to his family, lawyers and foundation, even as the 66-year-old has complained of poor health.

Mr. Rusesabagina told family members that prison officials informed him that they would cut his access to food, water and medicine starting Saturday.

His family and lawyers believe the move by Rwandan authorities was an attempt to pressure him to return to his trial, which he stopped attending in March after saying he did not expect to receive justice. Mr. Rusesabagina, the former hotelier whose efforts to save more than 1,200 people during the country’s genocide were depicted in “Hotel Rwanda,” later became a critic of the government of President Paul Kagame.

No official reason was given for the new order, and Johnston Busingye, Rwanda’s attorney general and minister of justice, who oversees the country’s prison system, did not immediately respond to calls and a text requesting comment.

On Friday, Mr. Rusesabagina’s lawyers were scheduled to visit him but were denied entrance to the prison, his lead counsel, Kate Gibson, said. Calling the latest developments “disturbing,” Ms. Gibson said the legal team filed an “urgent submission” with the U.N. Working Group on Arbitrary Detention seeking an inquiry into Mr. Rusesabagina’s situation.

“It is difficult to imagine a situation of more direct and deliberate harm to a detainee, particularly one in poor health,” Ms. Gibson told The New York Times.

Mr. Rusesabagina was arrested last August and charged with nine offenses, including murder and forming an armed group accused of staging deadly attacks in Rwanda. A Belgian citizen and a permanent resident of the United States, he had traveled from his home in San Antonio, Texas, to join Constantin Niyomwungere, a pastor who he says invited him to speak to his churches in Burundi, Rwanda’s neighbor. 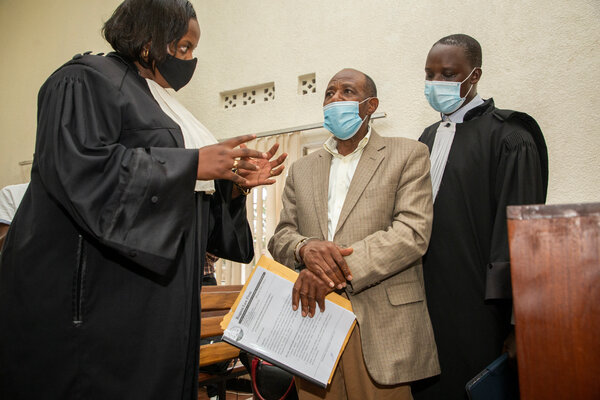 Mr. Rusesabagina didn’t know that Mr. Niyomwungere was working as an agent for Rwanda’s government and had been part of a plan to lure him to the country. After meeting in Dubai, the two boarded a private jet that Mr. Rusesabagina thought was going to Burundi — only to land in Kigali on Aug. 28 where he was summarily arrested.

Rwandan authorities have said that Mr. Rusesabagina was going to Burundi to meet with rebel groups based there and in the bordering Democratic Republic of Congo.

In the days before he was presented to the press on Aug. 31, Mr. Rusesabagina remained bound hand and foot, unable to properly breathe or use the bathroom, and held in a location he described as a “slaughterhouse” where he heard the screams of other detainees, according to an affidavit by one of his Rwandan lawyers, Jean-Félix Rudakemwa.

Murangira B. Thierry, a spokesman for the Rwanda Investigation Bureau, denied the allegations in the affidavit. The bureau, he said, “is a professional investigative body that respects human rights.”

Mr. Rusesabagina’s lawyers say they have not only been prohibited from visiting him, but they must also submit all documents they wish to share with him to authorities first. Previously, any notes the lawyers had taken during meetings with him had to be reviewed by prison officials before they could be taken out of prison, Ms. Gibson said.

“Denied access to lawyers of his choosing, to the case file against him, to time and resources to prepare a defense,” Ms. Gibson said, “the proceedings against Mr. Rusesabagina have systematically violated his rights as an accused, to the point that he has chosen no longer to participate.”

Mr. Rusesabagina’s family and lawyers say his health has deteriorated since his arrest and that he has expressed fears of dying from a stroke.

“Of particular concern is the fact that the doctor the Rwandan government provided prescribed three bottles of water a day, and he is not receiving those,” Kitty Kurth, the spokeswoman for his foundation, said in a statement on Friday.

Mr. Rusesabagina is a cancer survivor, has cardiovascular issues and has been complaining about severe back pain.

“My family is very scared and worried,” Mr. Rusesabagina’s daughter Anaise Kanimba said on Saturday. “We don’t know if his health will make it. We don’t know when we will talk to him next. This is devastating.”