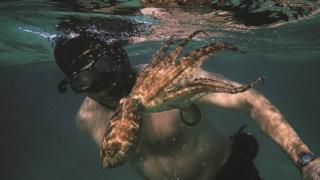 Imagine befriending an octopus, swimming alongside the much-feared great white shark, having your face stroked by a rarely seen clawless otter and cradling a wild rock fish in your hands.

These fascinating, life changing experiences have been documented by South Africans Craig Foster and Ross Frylinck in a newly released book entitled Sea Change – Primal Joy and the Art of Underwater Tracking following eight years of diving without wetsuits and scuba gear in the icy waters of Cape Town.

Mr Foster said he developed an amazing relationship with an octopus during the course of his daily dives into what he described as the “golden” underwater kelp forest outside Simon’s Town, which lies on the Atlantic side of the Cape peninsula. 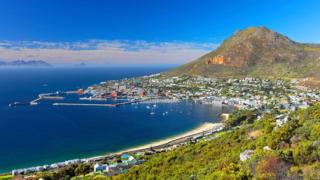 “I had the privilege of visiting this incredible animal for almost a year. It totally trusted me, lost all fear, it would take me on hunting expeditions and let me into its secret world.

“Octopuses have different personalities, some are quite bold, others very shy, she was in between,” Mr Foster told the BBC, describing how she would come over and greet him when she became accustomed to his visits.

“It is a great privilege to step into that world to learn – not like a mammal – but like a fellow spineless creature in her invertebrate world,” he said.

Her den was mainly a hole she had dug in the ocean floor, which the diver described as a “proper home”.

“She hunts over 50 species but you can only find that out when you’re allowed into her den and can pick up the bones of the animals she has eaten,” he said, referring to the lobster and crab shells he saw.

“You realise, my goodness, her life is so detailed and crazily connected to everything around her.”

‘Human are not on a shark’s menu’

Unlike the aggressive hunters of human flesh they are often portrayed to be, he paints a totally different picture of a magnificent serene animal. 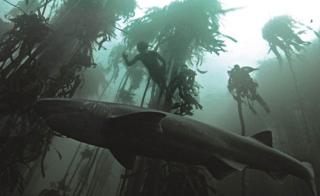 “When the great white sees a human it scans us, its search image is picking up something that’s not prey. They are not sure what we are, they may be curious but it’s not something that’s good for them to eat and they know that.

“They aren’t animals that are after us, if they were, there would be attacks every day. If they see a seal, a fish or some of the other prey that’s a different story but humans are not on their menu.

“The one attack a year is an aberration. There’s something in that person they attack that’s triggering a response in that shark, it’s incredibly rare. Maybe it’s the muscle tension that’s high, maybe the shark is in a bad mood.

You may also want to read:

“I have made eye contact with them. I once had five great whites circling me in open water and I could see no aggression towards me whatsoever,” Mr Foster said.

“I’ve had a couple of close meetings with Tiger Sharks but they’re also very gentle if you’re relaxed. These animals are not the killers they’re made out to be.”

Mr Frylinck, despite a scary maiden encounter with a big shark, has also become more comfortable with the much-feared animal.

“White sharks very rarely enter the kelp forest, they patrol the fringes. They swim around this bay which has one of the highest concentrations of white sharks in the world.

“One day we were swimming around the edge of the forest and Craig’s friend Danny, who was with us, told me a white shark had just swum three to four metres away from my shoulder and had watched me quite intently. He described it as an absolute monster – between four and five metres,” Mr Frylinck said.

Mr Foster, an award-winning film-maker of natural history, managed to adapt to the underwater world the tracking techniques he learnt in the Kalahari desert from the San people, widely regarded as being the best trackers in the world. 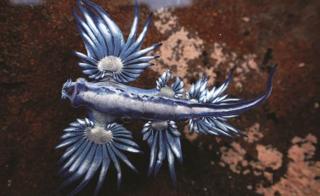 “It involves a number of things like looking at subtle changes in sand and sand texture to see what animals have been around, looking to see if, for example, there’s been a kill, if a worm has been digging, slime trails, egg casings – there are a multitude of signs underwater.

“Initially I thought it would be impossible to try and track underwater but I was desperate to try and break into this very cryptic world,” he said.

“This crazy idea was in my mind for a long time and then eventually I started seeing the first underwater tracks, that’s when I first thought it could work but I had no idea that I could develop it into such a detailed way understanding of animals underwater.”

It was this understanding that led to Mr Foster uncovering eight new species of shrimp, one of which – Heteromysis Fosteri – has been named after him.

The three new species, mostly bright red to orange in colour with series of either spots or stripes, belong to the genus Heteromysis and differ from previously known species by colour pattern, eye shape and the patterns of spines on their legs and tails. 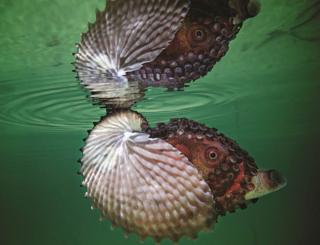 Having managed to meet his commitment to do 365 dives a year, he said his interaction with sea life has made him realise the importance of changing the way he lives.

“The whole way I’ve been taught by other humans to live on this planet is completely unsustainable and I’ve also realised that these animals, particularly the phytoplankton, provide the oxygen for every breath I take. They provide the basis for every meal I have.

“They have taught me that all the financial, political and other issues we hear about in the news are inconsequential compared to that natural foundation that holds everything up and we’re chipping away at it,” Mr Foster said.

“We need to nurture it rather than doing the opposite.”

All pictures from Sea Change Project.