The Supreme Court is expected to rule by Monday on whether the recent election of William Ruto as president, now mired in a welter of conflicting accusations, should stand. 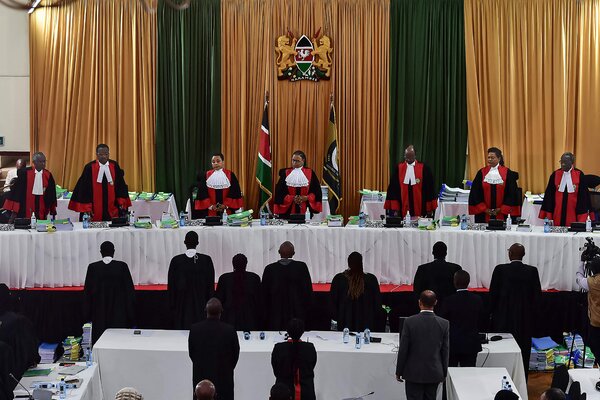 NAIROBI, Kenya — With its hefty price tag and sophisticated anti-rigging measures, Kenya’s recent presidential election was supposed to be among the best that money could buy — an elaborate system that experts said was more transparent than those in many Western countries, posting online tens of thousands of results in a matter of hours.

But since a victor was declared on Aug. 15, giving William Ruto a narrow margin over Raila Odinga, Kenya’s election still hangs in the balance. The outcome has been mired in a storm of rigging allegations, baroque conspiracy theories and vicious personal attacks directed at the same electoral commission chairman who only recently was being praised for a polling process seen by many as a model for Africa, and beyond.

At the center of the dispute is Mr. Odinga, who at 77 is making his fifth bid for the presidency. As with most of his previous four attempts, he says he was cheated of a rightful victory.

He has taken his accusations straight to Kenya’s Supreme Court, where seven judges have spent much of the past week trying to sift fact from fiction. A decision is expected by Monday evening.

The task is considerable. Mr. Odinga turned up outside the courthouse with a van filled with boxes of legal fillings, which he helped to carry inside. But while Mr. Odinga enjoyed a fair measure of public sympathy in his previous election battles — by most estimates, victory was stolen from him at least once — this time his accusations are more contentious.

His legal team appear to have taken a kitchen sink approach, making a wide range of charges that, analysts say, range from the plausible to the outlandish. They will be scrutinized by a Supreme Court with a reputation for independence: It forced a rerun of the 2017 election and earlier this year overturned constitutional changes championed by Mr. Odinga and President Uhuru Kenyatta.

With Kenya bitterly divided, the judges’ verdict on the election will be consequential, analysts say — not only for determining the result of the Aug. 9 vote, but also for the legitimacy of the ballot in a country widely seen as beacon of democracy on a continent where authoritarianism is rising.

“These seven men and women are walking a tightrope,” Denis Galava, a former managing editor at the Daily Nation newspaper, said of the Supreme Court justices.

After a series of bitterly, often violently, contested elections, many Kenyans hoped this one would yield a clean result followed by a smooth transfer of power. Violence was nearly absent during the vote and its aftermath. International and local groups that deployed thousands of election observers across Kenya said the vote went well.

But in the hours before Mr. Ruto was declared winner on Aug. 15, with 50.5 percent of votes against 48.9 percent for Mr. Odinga, the process plunged into rowdy discord.

At the national tallying center, Mr. Odinga’s top electoral representative proclaimed it a “crime scene” then stormed the dais with other supporters, flinging chairs and clashing with security officials who eventually drove the group out with truncheons. Two electoral commissioners were injured in the melee.

Around the same time, signs emerged that powerful figures inside the government also opposed a Ruto victory.

Many Kenyans, including members of the political elite, had supposed that Mr. Odinga would coast to victory thanks to his political alliance with Mr. Kenyatta, who had reached his two-term limit. That assumption was overturned as the results poured in. Some officials allegedly turned to other means to influence the result.

Top government officials loyal to Mr. Kenyatta turned up at the tallying center hours before the result was announced, pressuring the electoral commission to push the election into a second round, according to a court filing by the commission chairman, Wafula Chebukati. (If no candidate gets over 50 percent of votes, Kenya’s system requires a runoff).

He said the group, including the inspector general of police, the deputy chief of the armed forces and the solicitor general, warned him that “the country is going to burn” if Ruto was declared the winner, leaving “the blood of dead Kenyans” on the commission’s hands.