DAKAR, Senegal — When the heavy gunfire first started, Abdulkadir Musbau was out in his hometown Kankara, buying noodles for his children’s Saturday breakfast. Around him, people started running in all directions, so he sprinted home, passing police and vigilantes on the way.

At first, Mr. Musbau thought the attack was coming from local bandits, a term used for armed criminals that operate throughout Nigeria. The previous day, heavily armed men had assaulted a nearby village, killing 12 people, and vigilantes from Kankara had gone after them.

Eventually the gunfire quieted. Mr. Musbau exhaled. His neighbors began to come out of their houses. One said a boarding school had been attacked. It took Mr. Musbau a moment to realize that it was the school his 12-year-old son, Abdullahi, attended.

Abdullahi was one of hundreds of young boys who went missing on Friday after gunmen stormed the Government Science Secondary School in Kankara in the northwestern state of Katsina, at around 9:40 p.m., shooting Kalashnikov rifles into the air and rounding up students.

By Tuesday, the leader of the Islamic extremist group Boko Haram had claimed responsibility for the raid in an audio recording, shocking the country and evoking painful memories of the 2014 abduction of 276 schoolgirls in Chibok, which sparked international outcry around the hashtag #BringBackOurGirls.

A Boko Haram-branded video released Thursday showed a boy who said he was from Kankara begging the government to call off the army, dissolve vigilante groups and close schools. “We have been caught by a gang of Abu Shekau,” he said, referring to the head of Boko Haram. “Some of us were killed.”

“You have to send them the money,” he added.

Crowding around him, a dozen smaller boys added their voices. “Help us,” they called out to the camera.

An audio message from a Boko Haram representative was tacked onto the end, implying some sort of collaboration between the kidnappers and the militants. If Boko Haram — a group that President Muhammadu Buhari has repeatedly declared defeated and weakened — has affiliates in the northwest, it could mark an expansion of the terrorist group’s reach in the country, where it has typically only operated in the northeast.

In 2015, Mr. Buhari campaigned on the pledge to clamp down on the jihadist group and he has repeatedly promised to bring home every Chibok student.

“The Chibok girls are still fresh in our minds,” said Bulama Bukarti, an expert on extremist groups in Africa at the Tony Blair Institute for Global Change. “The difference is now Boko Haram has fighters outside the northeast, they have people who are natives of the northwest.”

The kidnappings share striking similarities. Like the Chibok attack, armed men rushed the boarding school at night, taking hundreds of children, in this case all boys, and moving them to a countryside hide-out. They were then split up into groups, according to students interviewed by local media outlets who managed to escape their abductors, making it more difficult for security forces to conduct a rescue operation.

The state governor said 333 children had been abducted, though some students who escaped told journalists that they counted around 520 students. 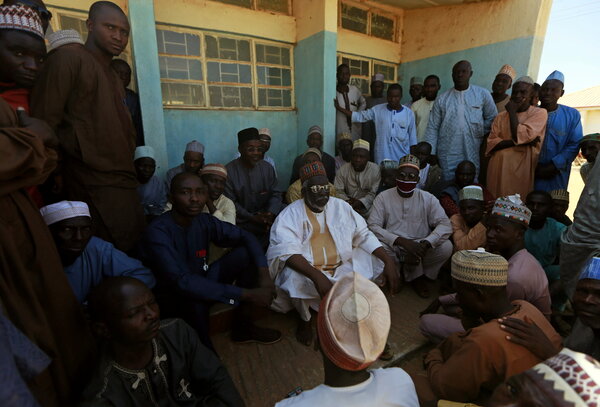 And as with the Chibok abduction, the devastated parents of the kidnapped boys must rely now on a government they have grown to distrust to rescue their children, or at least determine where they are being held. They worry that their sons, like the more than 100 Chibok girls still missing, may never come home.

“The government should find a way to settle things with our children’s abductors so that every child is returned safely to his family,” said Mr. Musbau, adding that all he had witnessed from the government so far were “time-buying antics.”

Mr. Musbau had been delighted when Abdullahi, the eldest of his six children, earned a spot at the secondary school in Kankara. In elementary school, he had finished at the top of his class, and hoped to be a doctor when he got older.

“Abdullahi is an incredibly intelligent child, very obedient and hardworking, and that’s what makes us always proud of him,” Mr. Musbau said by phone from Kankara.

When he heard the school had been attacked, Mr. Musbau didn’t believe it. He jumped on his motorcycle and rushed to the school, along with dozens of other parents.

“The reality dawned on us that our children were indeed abducted,” he said from the school, which he has barely left since the attack. “Everyone was hysterical. No one thought that the bandits could do this. They have never done such a thing.”

The attack in Kankara was the third mass kidnapping from a Nigerian school in six years: In 2018 more than 100 girls were kidnapped in the rural community of Dapchi, a town in the northeast, though most of them were returned home after a few days.

The kidnapping was significant both because it occurred outside Boko Haram’s known sphere of influence and also because it took place in the president’s home state, Katsina, just as he had arrived for a weeklong visit. Mr. Buhari has so far released only a short statement through a spokesman and has not yet visited Kankara. He also directed that security be tightened around schools.

Katsina’s governor closed all schools in the state, the local news media reported.

Many northern Nigerians voted for Mr. Buhari in 2015 thinking that he would use his credentials as a former general and one-time dictator to instill discipline and build peace in Africa’s most populous nation.

But most analysts — and many of the president’s former supporters — acknowledge that Mr. Buhari and the chiefs of the country’s armed services have failed, and that their claims to have defeated Boko Haram are empty. These latest attacks, coming on the heels of a countrywide uprising against police violence, insecurity and bad governance, have also exposed the public’s growing discontent with a Nigerian government unable to protect its people.

In the northeast, the government has pursued a strategy of building heavily protected garrison towns, leaving the countryside largely at the mercy of the militants. More than 70 farmers were killed there last month, caught between the government and the extremists.

In the northwest, attacks and kidnappings have become increasingly common. Until now, however, they have been blamed on bandits, not terrorists, which Mr. Bukarti, the extremist group expert, said underplayed the severity of the situation.

“It’s that possibility of the boys getting indoctrinated, trained and armed to fight that is scary, but also the fact that if the fighters are under pressure, military pressure, they may end up executing the boys,” he said.

A local official said the government was aware of the deteriorating situation around Kankara but had done nothing to resolve it.

“These bandits are very well known, and so are their families,” said the official, who asked for anonymity because he had been instructed not to speak to journalists. “Why were they treated with kid gloves until they became monstrous and difficult to contain?”

Mr. Musbau has had similar concerns since his son went missing. Since Friday, he has hardly eaten or slept. Along with several other parents, he has kept vigil at the school, thinking about Abdullahi.