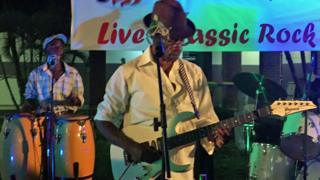 In our series of letters from African journalists, Ismail Einashe goes in search of some famous glam rockers who changed Zambia’s music scene.

One Friday evening I found myself at the Alliance Française in Lusaka, Zambia’s capital, for a live concert by Albatross Muf Rockers – a veteran Zamrock band playing hits from the 1970s.

Zamrock was unique and defined musical tastes in the southern African nation at the time.

Musicians in Lusaka and the Copperbelt fused traditional African sounds with psychedelic rock and funk, drawing inspiration from 1970s superstars such as Jimi Hendrix, The Eagles and James Brown.

Zamrockers made their own extraordinary records and sang mostly in English, but also in local languages such as Bemba and Tonga.

Popular Zamrocker bands included Amanaz, The Peace, Ngozi Family and Witch (an acronym for “We Intend To Cause Havoc”), which was one of the best-known bands of the Zamrock era with lead singer Emmanuel “Jagari” Chanda – often dubbed Zambia’s first rock star.

Witch is now enjoying wider appeal with their song Living in the Past – as it recently featured in the HBO superhero series Watchmen.

Zamrockers made music about the times they were living in. Bands such as The Peace, formed in a township in Kitwe, the heart of the Copperbelt, in the early 1970s, explored race, power and self-determination.

Their song, Black Power, focused on a post-colonial African yearning for freedom and the lyrics spoke for “the black people, for the negroes in America”, capturing that radical 1970s movement for pan-black self-determination and economic empowerment from Africa to the United States.

It was also all about the fashion – no musical movement is complete without it – and the Zamrockers did not disappoint. They wore fluorescent colours, bell-bottom jeans and daring styles inspired by the funk-rock visual playbook complete with Hendrix-style Afros.

Zamrock flourished in the post-colonial era – Zambia gained independence in 1964 under President Kenneth Kaunda and sought to carve out its own political, social and economic future.

Mr Kaunda passed a law that 95% of music played on radio stations should be of Zambian origin.

It became an era of rapid change that also saw the young nation create its own cultural identity.

Though the roots of Zamrock may have been made in America, the sound was distinctly Zambian.

Unlike its neighbours landlocked Zambia managed to avoid war and conflict and grew economically because of its huge copper wealth, which saw the country enjoy one of the highest per capita incomes in Africa.

This relative peace and stability gave young Zambians the space to forge their own musical identity.

But by the late 1970s this unique Zamrock scene – that was daring and dynamic – died out and disappeared into rock history.

The decline of Zamrock came quickly as Zambia experienced an economic collapse from the oil crisis and plummeting copper prices.

Many of the musicians vanished from the scene or went back to work – some returned to mining.

And this was all before the 1980s HIV/Aids crisis, which devastated Zambia and led to the deaths of many musical talents.

Now decades on, I wanted to see if there were any remnants of this glorious era still visible in Zambia – any echoes of this short-lived creative boom.

I decided to go in search of Zamrock. I arrived in Lusaka on a humid evening. Little distinguished it from other major cities on the continent: there were malls everywhere, traffic-clogged streets and the constant hum of construction.

It was hard to imagine that this city was once the beating heart of Zamrock.

The sounds I heard on radios and in bars were mostly commercial dance tunes.

Musical tastes had clearly shifted in Zambia, where the median age is just 16.9 years – and in common with other young Africans the musical choice now was hip-hop and R&B.

It was clear that Zamrock had long been forgotten by most Zambians.

Outside Zambia there have been attempts to recapture this era with record labels such Now-Again Records reissuing some of the finest Zamrock albums of the era such as those by Amanaz and Witch.

And in Zambia bands such Albatross Muf Rockers still perform to keep the Zamrock memories alive.

Listening to them that evening in the unlikely setting of the Alliance Francaise – and hearing the passion with which they played their guitars and drums – it was akin to time travel.

For a brief moment I felt like I had been transported back – head banging – to the heat and vibe of those clubs, bars and musical joints of 1970s Lusaka.