For years, Soulaimane Raissouni, a Moroccan newspaper editor, didn’t shy away from reporting on some of the most sensitive issues in the North African kingdom, including antigovernment protests that erupted in 2011 and 2016. But his criticism of how the authorities have handled the pandemic appeared to go too far.

A little over a year ago, he was arrested at his home in Casablanca after accusations of a sexual assault — allegations that he says are false and trumped up to intimidate him. Imprisoned ever since, he launched a hunger strike almost three months ago in protest.

On June 10, he appeared in court, emaciated and unable to walk without assistance. “Please take me back to prison to die,” he told the judge.

Mr. Raissouni is one of at least 10 Moroccan journalists who have been jailed in recent years, most of them accused of sex crimes and other acts deemed illegal in Morocco, including certain forms of abortion. Rights groups say the cases are being pursued by authorities whose true aim is to silence the country’s small cadre of independent journalists with false and politically motivated accusations.

All of the journalists detained had published articles about corruption or abuse of power within the kingdom, many of them targeting businesses or security officials with ties to King Mohammed VI.

Morocco, a constitutional monarchy in which the elected Parliament has little sway over the royal palace, has close ties to the United States and is a reliable ally in counterterrorism cooperation. But rights groups have long criticized the kingdom over its limits on freedom of expression and violations of human rights.

“The monarchy has asphyxiated the independent media when they became too critical,” said Abdeslam Maghraoui, a professor of political science at Duke University.

The government also said that his accusations of abuse were false, adding that representatives of rights groups had visited him in jail. 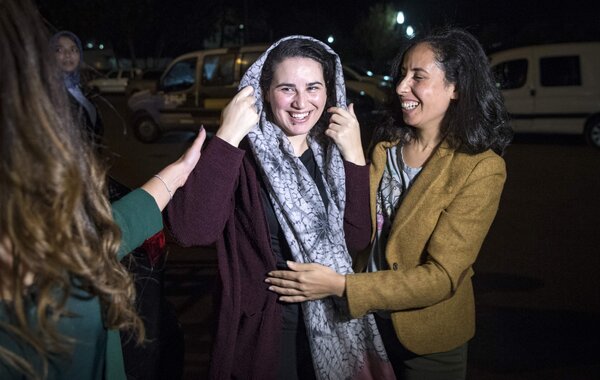 Mr. Raissouni, 49, came of age during the years after King Mohammed VI ascended to the throne and promised greater openness. He was the editor of the newspaper Akhbar al-Yaoum, which shut down in March because of the imprisonment of its journalists and longstanding financial problems.

He and other well-known Moroccan journalists had made their names by investigating the previous king’s excesses. But as they turned their attention toward the new monarch, the tenor of the palace changed.

Democracy protests reached Morocco in 2011, and journalists increasingly became the target of security officials. Then, in 2016, the death of a fishmonger in the northern city of al-Hoceima — echoing a vegetable seller’s suicide in Tunisia that ignited the Arab Spring uprisings in late 2010 — set off Morocco’s largest protests in years. The authorities arrested hundreds of demonstrators and sentenced the movement’s leaders to years in jail.

Mr. Raissouni covered both movements despite deepening harassment of journalists covering the protests. And by the start of the pandemic, he was taking aim at what he deemed the government’s shoddy response to the coronavirus.

“More people are getting arrested than are getting tested for the virus,” he wrote in a column a couple of days before his arrest in May 2020, criticizing the powerful chief of Morocco’s security apparatus.

The police arrested Mr. Raissouni after a man claimed in a Facebook post to be the victim of an attempted sexual assault. The post did not name Mr. Raissouni but when the police summoned its author, he confirmed that he was accusing the journalist, according to documents.

Mr. Raissouni has denied the accusations and says the authorities used the accuser to set him up. In April, he began a hunger strike to protest the conditions in jail, which his lawyer said had included solitary confinement.

“Hunger strike is the most extreme form of protest,” Mr. Raissouni wrote last month in a public letter in which he said that officials in jail had beaten him. “Only one who has been a victim of a great injustice can undertake it.”

Mr. Raissouni is not the only journalist in Morocco who has faced accusations of sex crimes after publishing investigative work. Last July, Omar Radi, a freelance journalist who wrote about official corruption, was jailed on charges of espionage and rape and is now on trial.

In 2019, Hajar Raissouni, Mr. Raissouni’s niece who is a fellow journalist, was convicted on charges of having sex with her partner, whom she was not married to at the time, and of having an abortion — both of which are crimes in Morocco.

“I kept on thinking, ‘What did I do to deserve this? What happened to my dreams?’” said Ms. Raissouni, who left for Sudan after a royal pardon.

In 2018, Akhbar al-Yaoum’s founder and publisher, Taoufik Bouachrine, was sentenced to 12 years in prison on sexual assault charges. The United Nations Working Group on Arbitrary Detention concluded that the case was politically motivated, but the sentence was increased to 15 years in an appeal.

In a Washington Post opinion essay last year, Afaf Bernani, a former Akhbar al-Yaoum employee, said the police had tried to force her to falsely testify that Mr. Bouachrine had sexually assaulted her. When she refused, she was prosecuted on charges of perjury. She fled to Tunisia.

Experts say the cases reflect a dangerous dynamic for journalists more broadly in North Africa and the rest of the Arab world. Those dangers escalated during the Trump administration, when the American president expressed admiration for leaders of countries like Egypt and Saudi Arabia, who use repressive tactics.

Yet under the Biden administration, Secretary of State Antony Blinken attended a meeting with Morocco’s foreign minister in Rome last month and seemed to nod at the troubles for reporters in the kingdom. He tweeted about a need for “shared interest in regional peace and stability and human rights, including press freedom.”

Still, Mr. Raissouni’s wife, Kholoud Mokhtari, said nothing would persuade him to suspend his hunger strike.

“He is convinced that it is the only way he can obtain a fair trial and a provisional release,” she said. “My demand, as his wife, is that they release my husband. You have achieved your revenge. You have destroyed our lives.”