SENEKAL, South Africa — A young white farm manager was found earlier this month strangled and tied to a pole on a farm in the eastern part of the Free State province, police said. Two Black men were accused of the murder.

At a packed court hearing on Friday, the police captain investigating the case said that the suspects were part of a ring of livestock thieves operating in the area, and that it appeared that the motive was robbery rather than racial animus.

But the killing of the farm manager, Brendin Horner, has become the latest flash point for racial conflict in South Africa, where the segregationist apartheid regime fell almost 30 years ago. Tension is particularly high in rural farming areas where white people still own a vast majority of the farms and Black people still serve as their often impoverished laborers.

Groups representing white farmers accuse the South African government of deliberately failing to protect them. Some white activist groups say that what they call “farm murders” represent the beginning of a “white genocide” aimed at driving whites out of South Africa.

Critics see this as a deeply distorted narrative promoted by the white beneficiaries of apartheid to drum up international sympathy. They point out that violent crime is common in South Africa. The vast majority of the victims are Black. 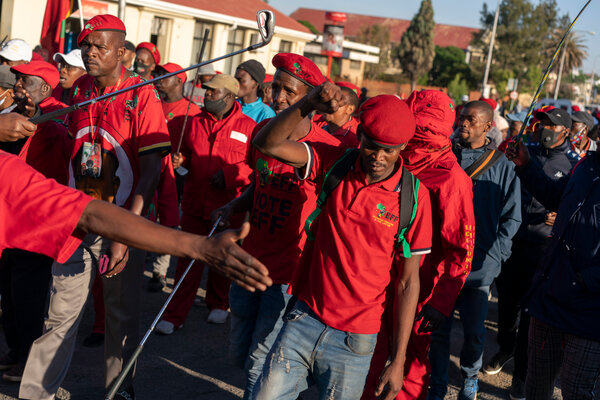 At Friday’s hearing, white farmers and motorcycle riders faced off with Black protesters in the red polo shirts of the leftist political party Economic Freedom Fighters, or E.F.F., outside the small rural courthouse in Senekal, a town on the banks of the Sand River. Police erected barbed wire to separate the groups, but at one point they stood nose to nose — a situation defused when volunteer marshals from both sides intervened.

On a hill outside town, white farmers waved a banner with the face of Mr. Horner and carried white wooden crosses. Some wore bulletproof vests. After reading the Bible and praying, they sang South Africa’s apartheid-era national anthem.

Some of the farmers said in interviews that South Africa’s lockdown in response to the coronavirus pandemic, and the resulting economic downturn, have made poor Black South Africans more desperate.

“Usually they steal for food on the table, now they’re killing,” said Derek Meyer, a farmer at the protest.

Khanyi Magubane, a political commentator and journalist, said of the white farmers, “They don’t see the bigger picture of dysfunctionality in South Africa. Everybody is being targeted, everybody is being robbed.”

The farmers jeered as buses and minivans ferrying supporters of the E.F.F. drove by, some passengers singing “Kill the Boer,” a liberation-era song that has since been declared hate speech.

The founding leader of the E.F.F., Julius Malema, a firebrand expelled from the ruling African National Congress party, addressed the crowd of about 2,500 from a portable stage outside the courthouse, saying, “We are here to fight and die against apartheid, because South Africa still has got apartheid.”

He has tapped into long-simmering anger by calling for land redistribution. In Parliament, the E.F.F. controls 44 out of 400 seats, and accuses the majority party, the African National Congress, of moving too slowly and too cautiously on land redistribution.

A 2017 government survey found that white farmers control nearly 70 percent of farms held by individual owners in South Africa. Much of that land was brutally confiscated from African inhabitants generations ago. Of the vast tracts in Free State, where Mr. Horner was killed, three quarters of farms are owned by white South Africans, while Black South Africans own just 3 percent, the survey found.

South Africa’s president, Cyril Ramaphosa, spoke out about the killing of Mr. Horner on Monday, expressing horror and sympathy, but cautioning against falsely equating the murders of white farmers with ethnic cleansing. “They are not genocidal. They are acts of criminality and must be treated as such,” Mr. Ramaphosa said in his weekly presidential address.

“What happened in Senekal shows just how easily the tinderbox of race hatred can be ignited,” he said.

In a nation with the world’s fifth-highest murder rate, Mr. Ramaphosa has in recent months used his addresses to name murder victims, particularly women killed during the lockdown. He pointed out that three young Black men were shot dead in a car in South Africa in the same week that Mr. Horner was killed.

But the violent protests over the killing of Mr. Horner grabbed immediate and outsized attention.

On Oct. 6, several hundred white protesters gathered outside the courthouse in Senekal where the two suspects were appearing for a hearing. Some protesters set a police van on fire and stormed the court holding cells, demanding that the defendants be turned over to them.

A 51-year-old white businessman, Andre Pienaar, was later arrested and charged with attempted murder, malicious damage to property and public violence. He was denied bail.

AfriForum, a large advocacy group for Afrikaners, the descendants of the white Dutch and Huguenot settlers of South Africa, has led international efforts to draw attention to their discredited claims that white farmers are being systematically forced off their land and killed in large numbers.

In 2018, after Ernst Roets, deputy chief executive of AfriForum, appeared on a segment on Fox News in the United States with the host Tucker Carlson, President Trump said on Twitter that he was directing his secretary of state to investigate what he called “large-scale killing” of white farmers.

In a telephone interview, Mr. Roets said that the government does not protect white farmers: “It’s very clear this is not a priority for them to do anything,” he said.

In the courtroom on Friday, the judge was flanked by four armed police officers, government ministers occupied the benches near the front and journalists packed the room.

The country’s minister of police, Bheki Cele, who had visited the town earlier in the week in a bid to de-escalate the tensions, noted in an interview afterward that four people — three of them Black — had been killed in the area since April.

“One of them is this young white man,” he said.

Lynsey Chutel reported from Senekal and Monica Mark from Johannesburg.

Seven men have been arrested on suspicion of ‘seizing or exercising control’ of a ship after an oil tanker was ‘hijacked’ yesterday. Hampshire Police says…