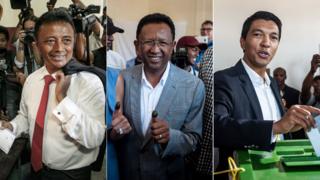 People in Madagascar are voting in a presidential election that sees the incumbent president battling against two of his predecessors.

There are 36 candidates in all to lead the Indian Ocean island, which in recent years has been hit by periods of political instability.

In May, the army threatened to take over amid huge street protests.

The main candidates promised to boost the economy in a country where 80% of the population live in poverty.

The front-runners have criss-crossed the nation to hold huge rallies.

President Hery Rajaonarimampianina and his two main rivals, former Presidents Marc Ravalomanana and Andry Rajoelina, are all wealthy men, fuelling claims by civil society groups that they used their time in office to enrich themselves.

Something which they all deny.

But they are believed to have spent large amounts of money on their campaigns, as the electoral law sets a very high spending limit, reports BBC Monitoring.

There are more than nine million registered voters out of a population of nearly 25 million people.

In order to win in the first round of voting a candidate needs more than 50% of the votes cast. Otherwise the top two candidates go through to a second round on 19 December.

There have been reports of long queues of voters and the European Union observer team says that no anomalies have been detected so far, Reuters news agency says.

A history of instability

At the end of 2001, self-made millionaire Mr Ravalomanana won a disputed poll, which led to a seven-month crisis, with the defeated candidate Didier Ratsiraka refusing to step down.

In 2009, after weeks of protests, media mogul Mr Rajoelina, ousted Mr Ravalomanana in a power grab that was backed by the army.

This year, President Rajaonarimampianina faced protests over an electoral law that was said to favour him.

The issue sparked protests that quickly escalated to political paralysis which ended in a compromise after the military threatened a takeover.

A unity government took over to pave way for the elections.