Military officials in Mali ousted the country’s interim civilian leaders on Tuesday, setting up a new crisis for the Western African nation, just nine months after the previous president was forced out in a military coup.

The leaders — Bah N’Daou, the president, and Moctar Ouane, the prime minister — were appointed last year to lead a transitional government to prepare for new elections. They were both detained by the military on Monday and taken to a base outside the capital, Bamako. On Tuesday, they were officially stripped of their duties, the military said.

The removal of the civilian leaders followed a government reshuffle announced by Mr. Ouane on Monday that sidelined some officers who had taken part in the coup that ousted the former president, Ibrahim Boubacar Keïta, in August. It also comes as workers in important sectors of the economy, including bankers and civil servants, have been on strike since last week after failed salary negotiations with the previous government.

Col. Assimi Goïta, who led the coup and had been serving as a vice president to Mr. N’Daou, said on Tuesday in a statement read on public television by one of his advisers that Mr. N’Daou and Mr. Ouane had sought to “violate” the transition to a new civilian government.

In his statement, Colonel Goïta said that the new government had been formed without consulting him. The newly appointed defense minister, Souleymane Doucouré, was also detained, alongside Mr. N’Daou and Mr. Ouane.

Colonel Goïta said that the transition process would continue and that elections would be held in 2022, as planned, but he did not provide further details.

The removal of the interim leaders could further destabilize Mali, where rebel and Islamist groups have controlled large swaths of territory in the north for almost 10 years. Mr. Keïta, the former president, was forced by military officers to resign on state television following weeks of protests against the government. 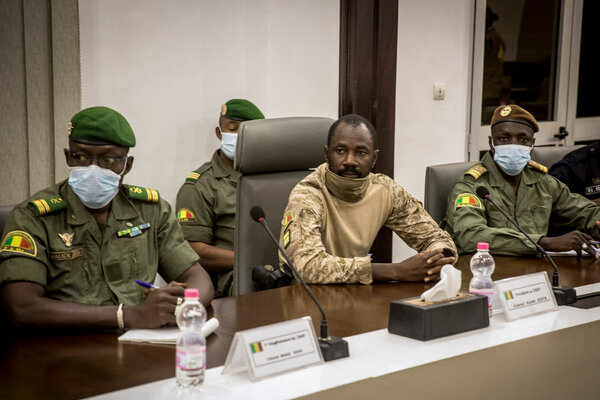 Mr. N’Daou and Mr. Ouane were appointed in September to oversee an 18-month transition back to civilian rule after the coup.

The detentions on Monday drew widespread condemnation. The United Nations, the United States and the European Union were among the countries and organizations that issued a joint statement denouncing the move as an “attempted coup” and calling for the leaders’ release.

Nine days after the coup in August, Mr. Keïta, the former president, was released from the same military base where Mr. N’Daou and Mr. Ouane were taken and driven back to his home.

A delegation from Ecowas, the regional organization of West African states that negotiated the appointment of the transitional leaders last year, was headed to Bamako on Tuesday, according to the joint statement, which was released before the announcement of the ouster.