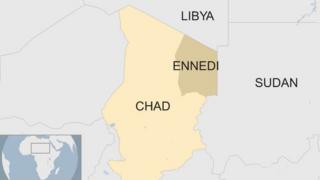 Chad’s military said on Saturday that it had captured more than 250 rebels during an operation against militants crossing from Libya.

A statement said that the large number included “four leaders” who had been detained.

They said 40 of the rebels’ vehicles had been destroyed and hundreds of weapons had been seized.

France, which provides military support to Chad, used warplanes this week to attack the convoy in the Ennedi region.

It announced on Thursday that it had attacked the stream of vehicles several times this week in conjunction with Chad’s armed forces.

The militants had managed to cross hundreds of kilometres into the country before being halted, AFP news agency reports.

Intelligence sources who spoke to Reuters news agency said only 100 militants had been captured.

The incursion is the latest in a series of threats against the rule of President Idriss Déby.

France ruled Chad as a colony from 1900 until it gained independence in 1960 and it has supported President Déby before.

A rebel coalition known as the Union of Forces of Resistance (UFR) says it was behind the latest convoy.

The alliance is made up of smaller rebel groups which oppose Déby’s presidency.

Local media say that the UFR’s chief of staff, Ousman Teguene, could be among those in custody.

Announcing the arrests, Chad’s military said they would continue their operation against rebels in the country’s Ennedi region.

President Déby has been in office since 1990, when he seized control in a coup.

Last year Chad’s parliament approved a new constitution that expanded his powers and could allow him to stay in office until 2033.