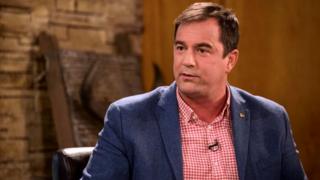 The DA’s former chief whip was chosen after the resignation of Mmusi Maimane as both parliamentary and party leader.

Mr Maimane, who is black, had said the traditionally white party was not the “best vehicle” to create a united South Africa.

In the last seven days, two other senior members resigned from the party.

Herman Mashaba, the black mayor of Johannesburg, resigned on Monday, citing concerns over how the party handled race as one of the reasons for his departure.

On Wednesday, Mr Maimane’s resignation was quickly followed by that of party federal chairman Athol Trollip, a white politician who is a Maimane loyalist.

Mr Steenhuisen was the only nominee for the parliamentary leadership, DA official Annelie Lotriet said on Sunday.

The election of the 43-year-old has become a trending topic on Twitter in South Africa with users pointing out that the DA leadership is now all white and questioning the election of a leader who lacks university education.