KHARTOUM, Sudan — Friday night by the Nile, and a love song wafted on the warm breeze that blew across Tuti Island, a crescent of land at the confluence of the river’s two great branches.

Hundreds of people had gathered on the beach for iftar, the sunset meal that breaks the daily fast during the Islamic holy month of Ramadan. Once they had eaten, there was a palpable sense of relief.

People lounged in the sand, smoking cigarettes and scrolling on their screens. Children splashed in the river shallows. Kites danced in the sky. While the Sudanese capital twinkled on the far shore, a young crooner struck up a song.

“How could your heart allow you to forget me?” sang Ibrahim Fakhreldin, his face bathed in the glow of cellphones held by his friends, who erupted for the chorus.

“Tell us what changed, for the sake of love,” they sang in unison, some playfully clutching their hearts, in a rendition of “Now You Just Pass Us By,” a traditional Sudanese ballad.

The song was personal for Mr. Fakhreldin, 20, who told me that he had once courted a girlfriend on this beach. “It’s over,” he said wistfully. “But the place is still here.” Now he had come in search of something else — a respite from the daily grind of Sudan, where a once-glorious revolution has run badly aground, and the heady hopes that it once inspired are crumbling.

“We come here to forget it all,” said Mr. Fakhreldin, who described himself as a disillusioned revolutionary. “The heat, the electricity cuts, the protests. Here, at least we can sing.” 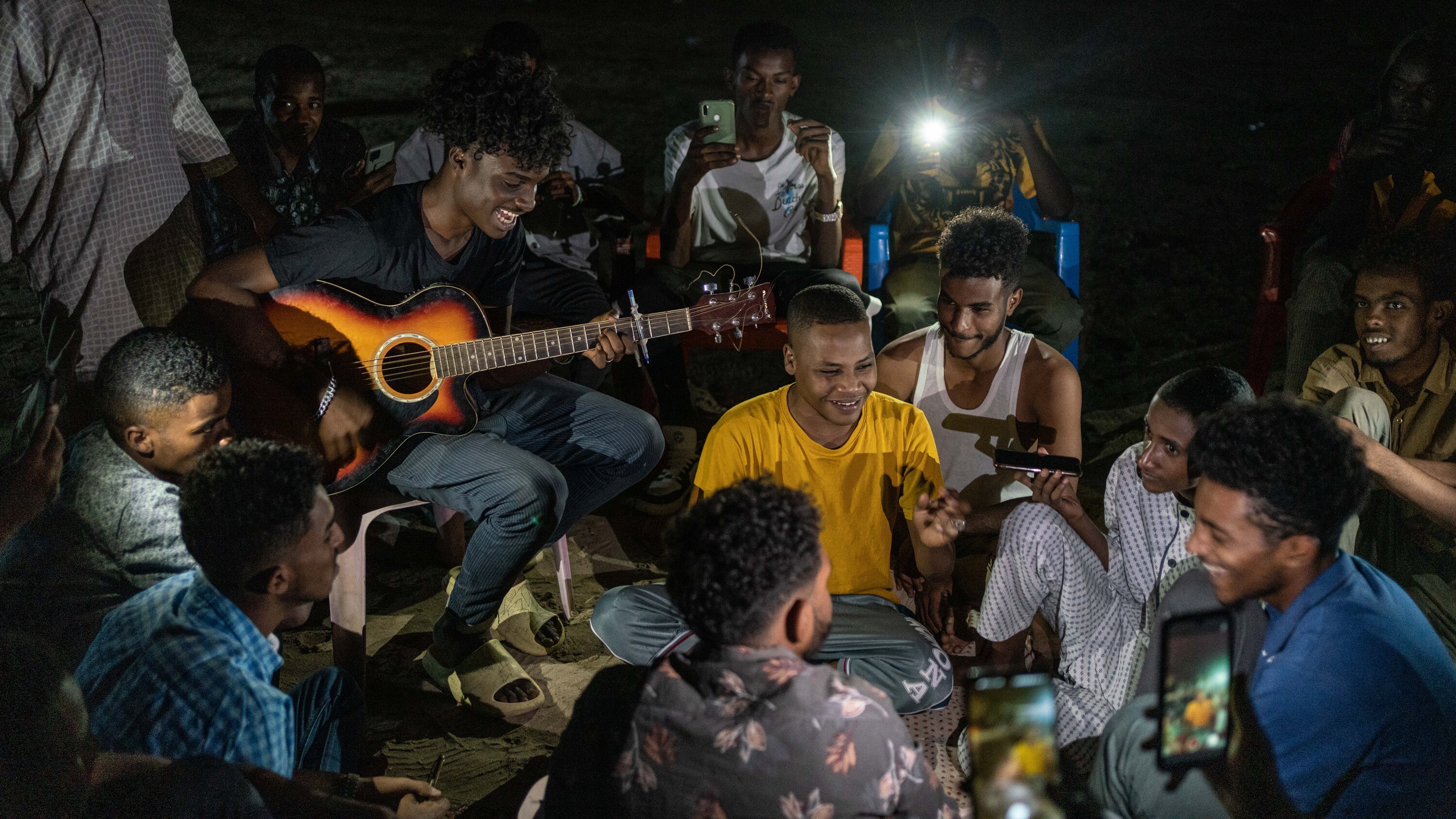 For those who are fasting, iftar is a daily deliverance after the long hours of hunger and thirst. In Sudan it is particularly trying: Daytime temperatures are regularly hitting 115 degrees Fahrenheit, around 45 degrees Celsius, these days, and the power cuts can last eight hours.

An ominous political backdrop sharpens the privation. A military coup last October scuttled the democratic transition that started in April 2019 when crowds toppled Omar Hassan al-Bashir, their autocratic ruler for 30 years. Now the economy is tanking, food prices are soaring, and nearly 100 people have been killed in anti-military demonstrations.

But Ramadan is also a time of community, when friends, families and even strangers come together to break their fast. The iftar meal, which over several weeks I was invited to share in riverside villages, desert huts and suburban streets, also offered a cherished pause — a chance to take stock at a moment when many say that Sudan is drifting perilously, leaving them uncertain what comes next. 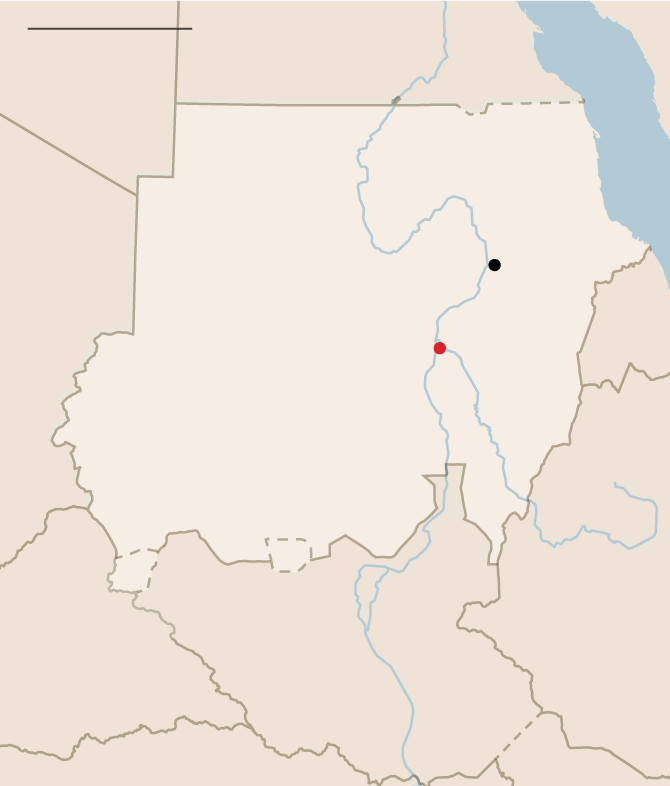 As we drove back to Khartoum one evening, we suddenly came on a group of determined-looking men standing in the middle of the road, urging us to stop. But this wasn’t a stickup. It was dinner.

On Oct. 25, a coup led by the military derailed Sudan’s transition to civilian rule and plunged the country back into fear and uncertainty.

A long mat lined with food platters was at the gates of a small mansion in the town of El-Kabashi. About 50 other travelers were already seated, waiting to eat. The free meal — an iftar for passing travelers — was financed by Hasoba el-Kabashi, a local entrepreneur and the owner of the mansion.

Mr. el-Kabashi told me he made his fortune in real estate, car dealerships and a cargo business in Dubai. Now he was paying it back. This was a small crowd, he remarked; he once fed six busloads of travelers. There was no question of anyone paying a cent.

“It’s for God,” he said, pointing to the sky now filling with stars.

His guests didn’t stand on ceremony. After 15 minutes they rose from the meal, offered communal prayers, and continued on their journeys. So did we.

With the road empty, we raced into central Khartoum, crossing the Nile on a century-old bascule bridge then swooping past the gates of the military headquarters where demonstrators massed to oust Mr. al-Bashir in 2019, in euphoric scenes that stoked hopes that this revolution could endure.

But now the square is a ghostly arena. Soldiers manned check posts on deserted streets. The celebrated revolutionary murals had been painted over. Just a few scraps of defiant graffiti remained. “We were killed here,” read one.

Further downriver, at the Chinese-built presidential palace, I met with Lt. Gen. Ibrahim Gabir, one of the generals now running the country. The military’s intervention last October was not a coup, he insisted. “I prefer to say redirection,” he said.

Over an hour of conversation, General Gabir blamed Sudan’s mess on its squabbling politicians and promised to hold elections by July 2023 — an impossibly short timetable to hold a free and fair vote, by most estimates.

It was nearly time for iftar. Leaving, I meandered through the long corridors of the empty palace. A painting depicted Mohammed Ahmed Ibn el-Sayyid Abdullah, a messianic 19th-century religious leader who led a revolt against British colonialism, trampling an enemy combatant under his horse. But when I finally found the exit, General Gabir was already there, jumping into a vehicle, scrambling home to break his fast.

The traditional iftar meal in Sudan includes rich meat sauces soaked up with kisra sorghum crepes, spicy beef sausages, bean stews and glistening chunks of watermelon. The food is washed down with seasonal drinks — karkade, or iced hibiscus juice, and a local sweet-and-sour beverage known as abreh. But for many Sudanese, these have become unaffordable luxuries.

At a sweltering bakery in Atbara, 175 miles from Khartoum, young men tossed flatbreads from an open oven that were sold for 50 Sudanese pounds, or about nine cents, each. Three years ago, they cost 2 pounds each. That’s a resonant issue in Atbara, where student protests over soaring bread prices in late 2018 triggered the countrywide movement that eventually toppled Mr. al-Bashir. But the appetite for revolution has diminished.

“I don’t care anymore,” said Kultom Altijani, a 45-year-old street vendor who appealed for money to send her ailing daughter to a dentist. “We want to eat and drink — that’s it.” 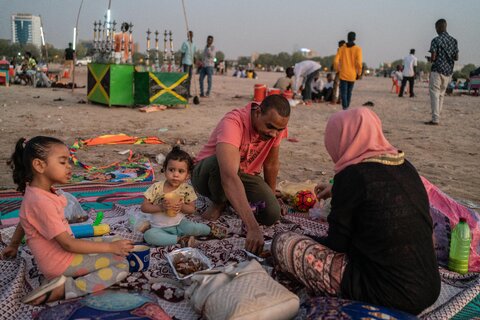 During the holy month of Ramadan, Muslims break their daily fast with iftar, a meal that is shared with friends, families and even strangers. In Sudan, I was invited to iftar in riverside villages, desert huts and suburban streets. 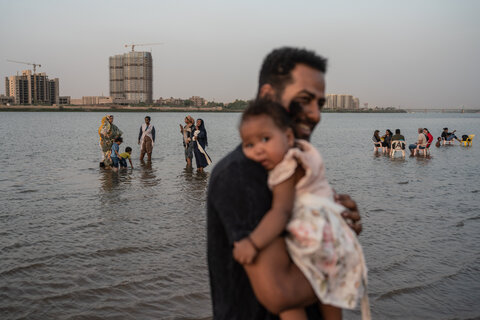 One evening people streamed to Tuti Island, in the Nile, to share iftar. It had been another scorching day with temperatures reaching 115 degrees Fahrenheit. Economic and political turmoil added to their hardship. 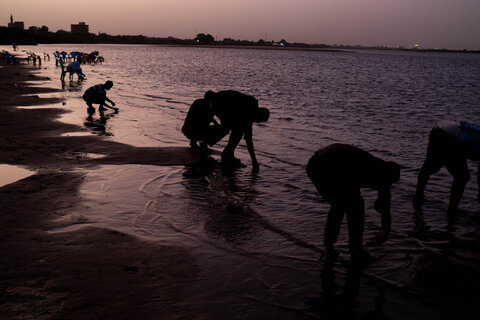 Once they had eaten, a wave of relief washed over the beachgoers.

Some lounged on the sand, smoking their first cigarettes of the day. Others dabbled in the water or flew kites.

Then a love song rang out. Ibrahim Fahkreldin, a 20-year-old crooner, performed traditional Sudanese ballads as well as new songs about Sudan’s growing turmoil. “We come here to forget it all,” he told me. 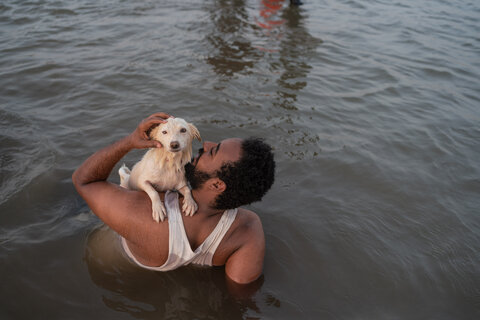 He wasn’t the only one. While iftar is a moment to satisfy hunger and thirst, it is also an opportunity to share food with loved ones — and a welcome respite from the daily grind.

It was the same everywhere I went, including this village 200 miles upriver. Some of these men worked in the nearby gold mines, and they offered to guide me to their workplace in the nearby desert. 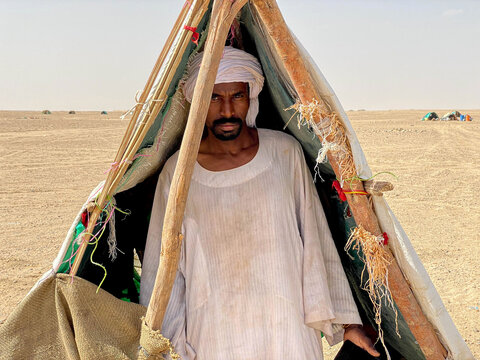 That led me to Ahmed Ali Jadallah, a miner I found sitting in a tiny tent, fasting. He was waiting for sundown to get down to work at the “line” — a seam of gold-rich rock he was hacking from the desert.

Even in a season of worship, Sudan’s turmoil kept pressing in. Nearly 100 people have died in street protests since the military seized power in a coup in October. The tumult continued through Ramadan. 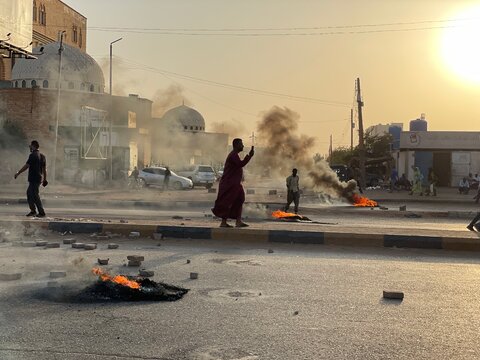 One afternoon, young men and women wearing ski masks clashed with police officers who were firing tear gas. Acrid smoke filled the air. Then the muezzin’s call rang out: It was time for iftar. 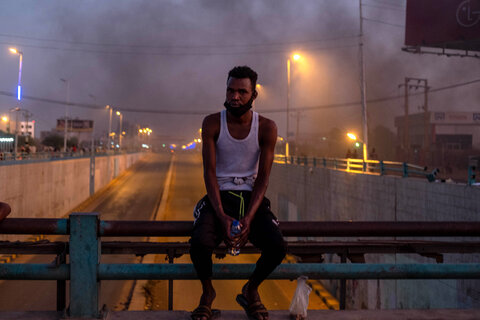 The protesters paused and pulled out dates, bottles of water and bags of sandwiches. Several offered to share.

Another fast was over, but Sudan continues down an unpredictable path. 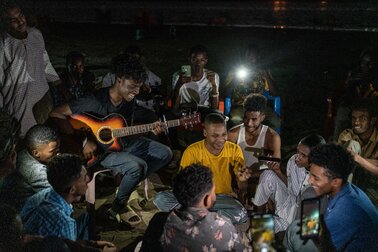 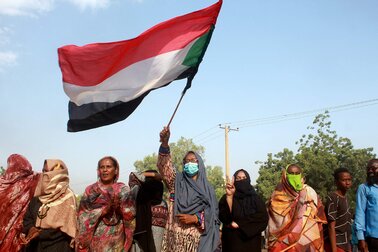