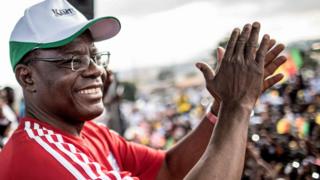 If found guilty, Mr Kamto, who was arrested on Monday, could face a prison term of five years to life, the BBC’s Killian Ngala Chimtom reports.

His party organised protests in four cities over the weekend, saying the election result was rigged.

The vote in October was marred by violence especially in the two English-speaking provinces, which have been hit by more than a year of violent protests and attacks by separatist rebels which have left hundreds dead.

Mr Kamto, who was detained in Doula along with 200 other protesters, could face further charges, including those of holding illegal gatherings and disturbing the peace.

Christopher Ndong, Mr Kamto’s lawyer, said his client denied the charges and that his right to the freedom of speech had been infringed.

Mr Kamto had been simply exercising his right to protest, he said.

“The government clampdown will not frighten anybody,” Mr Ndong added.

According to the AFP news agency, further marches, scheduled for Friday, Saturday and next week, have been banned by the authorities for the “preservation of public order”.

Mr Biya, who came to power in 1982, won a seventh term in office in polls last October marred by low turnout and voter intimidation.

Mr Kamto was his nearest challenger, gaining only 14.2% of the vote.

Across the country, about half of Cameroon’s voting-age population took part in the polls and tens of thousands of people were unable to cast their votes because of insecurity.

Voter turnout in the country’s two Anglophone regions – North West and South West – was as low as 5%, according to the International Crisis Group.