After wave of xenophobic violence, many foreign nationals say they do not feel welcome and fear for their safety. 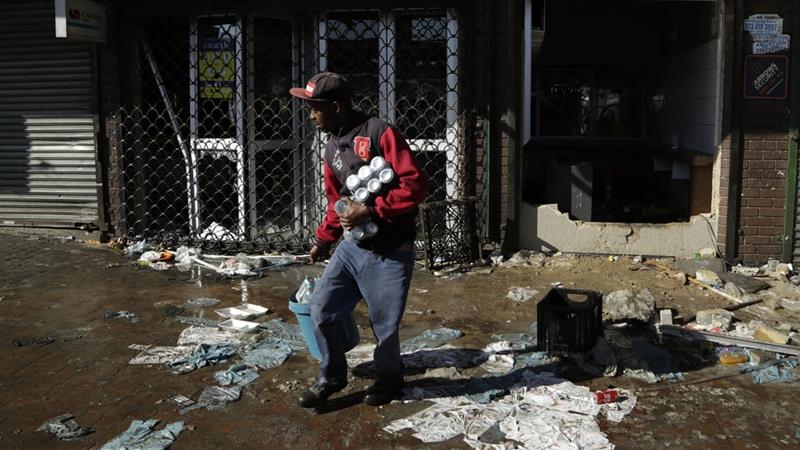 “I can’t do anything here in South Africa any more,” the 39-year-old Nigerian said on Monday, recounting the unrest that had begun the previous afternoon.

“Many people’s shops and property have been destroyed or looted. We came here with nothing and what we have is now disappearing.”

Uzoma, who has lived in South Africa for 16 years, is one of several hundred foreign nationals in the country’s economic hub left destitute after several days of looting and violence.

The fronts of supermarkets, clothing retailers and liquor stores are either completely destroyed or heavily barricaded as running battles between police and angry mobs have gone for days, with officers deploying tear gas, rubber bullets and, on occasions, live ammunition.

“We are chasing these things away,” Nkosi Sithole said, marching with a group from Wolhuter Hostel a Johannesburg workers’ residence towards the inner city.

“They can go and take their drugs with them,” said Joseph Ngcobo, repeating an oft-repeated South African stereotype that migrants bring nothing but crime and economic hardship. “We have no job and no money but they do. South Africans must have those things.”

According to the police, five people have died in the violence that has spread around Johannesburg. The nationalities of the deceased have not been released and the circumstances of the deaths remain unclear as police battle to contain the situation.

Parallels have quickly been drawn between now and 2008, when dozens of people were killed in the first major wave of violence targeting foreign nationals in South Africa.

But as then and during a more recent flare-up of migrant-directed unrest in 2015 – officials are hesitant to use the word that has often come to characterise the relations South Africans are accused of sharing with foreigners: xenophobia.

“For me, this is nothing more than pure criminality with people using xenophobia as an excuse,” Police Minister Bheki Cele told reporters on Jules street, as he visited affected areas in the inner city following the arrest of 189 suspects during law enforcement operations.

“Look at these shops – some of them are South African brands. There is nothing that has sparked any standoff between foreign nationals and South Africans. This is criminals taking advantage.”

But analysts argue xenophobia is always bubbling under the surface of the South African society, one of the world’s most unequal.

“It’s a mixture of denialism and displacement,” Patrick Bond, a professor of political economy at the University of the Witwatersrand Wits School of Governance.

“Government has failed to solve local problems so it’s easier to allow people to think it’s the immigrant’s fault. Shifting the responsibility for poverty and squalor somewhere else while being somewhat surprised when this turns bloody and violent.” 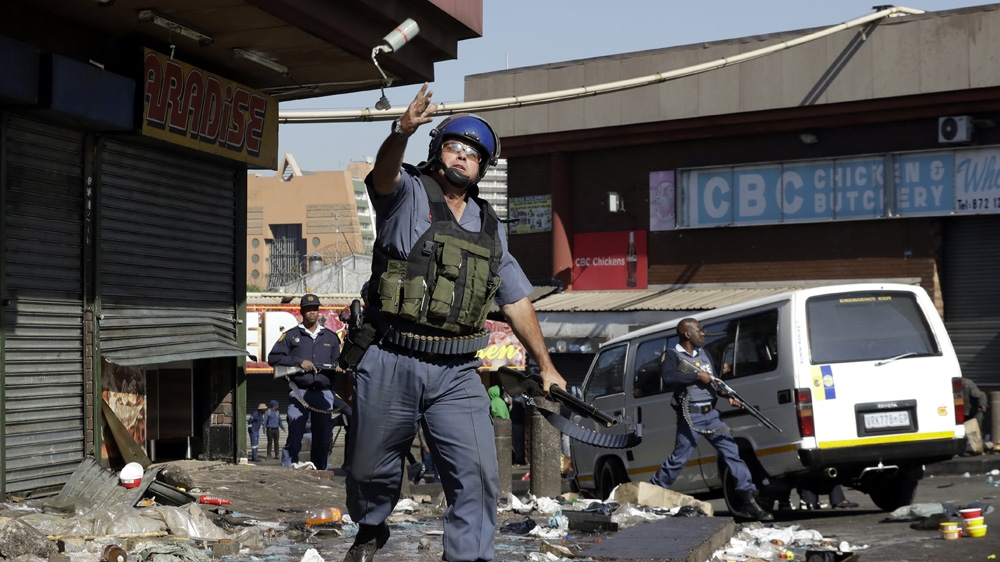 ‘All foreigners must go’

There are no studies to unequivocally confirm if foreign nationals coming to South Africa affect the economy or society negatively and whether they are disproportionately involved in crime.

Meanwhile, it’s debatable as to how many migrants are living or working in South Africa regularly or irregularly. Official statistics from the 2011 census suggest just over two million, while a discredited report quoted extensively claimed there are up to five million migrants among South Africa’s 56 million citizens.

Labour statistics show the country suffers from an unemployment rate of 29 percent, adding to further pressures in the competition for resources amid high inequality.

Theories of how foreigners affect the country’s fortunes run wild – as do the videos of the looting and skirmishes with police that have gone viral – raising concerns that the situation could mimic the xenophobic violence of 2008.

Patrick Bond, a professor of political economy at the University of the Witwatersrand Wits School of Governance, said the government had not done enough to dispel dangerous myths about migration.

“Failing to deal with the legacy of apartheid and its aftermath has contributed to the economic dystopia that is the lived reality of South Africa’s poor – both local and foreign – that are only trying to survive.”

Misconceptions appear to also be fuelled by social media awash with fake news as videos alongside alarming messages claiming the violence will intensify unless all foreigners leave are running rampant.

“These people have taken our lives away. They have taken our jobs and are putting pressure on public services. We are tired of them – ALL FOREIGNERS MUST GO!” reads one Whatsapp message. 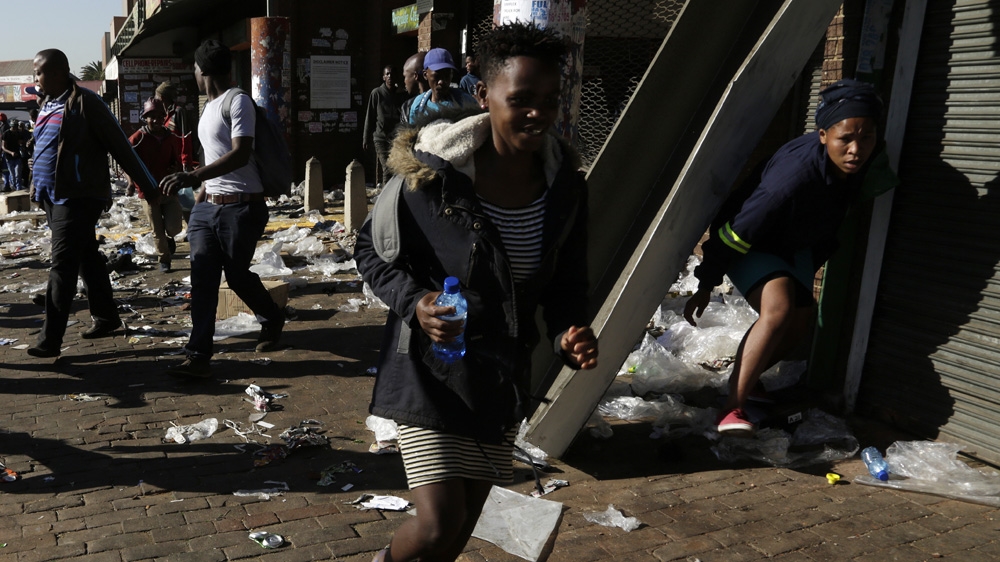 On Tuesday evening, breaking his silence on the unfolding chaos, President Cyril Ramaphosa insisted South Africa is “a country that is completely committed against xenophobia”.

“We do not allow and cannot tolerate the attacks on people from other African countries or any other country,” Ramaphosa said in a pre-recorded address posted on Twitter.

But for those affected by the situation, the situation is plain and simple – they do not feel welcome and fear for their safety.

“I’m very scared here in South Africa. How can I feel safe if they are wanting to kill us?” asked Jayendra Singh, a Bangladeshi mobile phone shop owner in Hillbrow in the north of the City.

In the country since 2003, Singh said he knew no other home but was now considering his options amid the latest wave of violence.

“We earn money but we help South African people every day. Why we can’t live here with peace?”