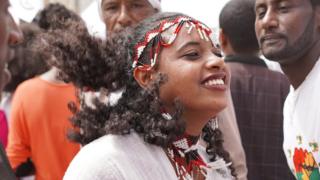 Huge crowds turned out in Ethiopia’s capital, Addis Ababa, as it hosted for the first time in more than a century the annual Irreecha thanksgiving festival of the Oromo, the country’s largest ethnic group.

In one Irreecha tradition, freshly cut grass and flowers are placed in water to thank God for the end of the rainy season and the beginning of spring. 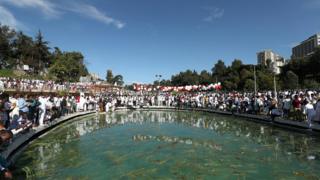 There was tight security as hundreds of thousands of people clogged the streets, including Addis Ababa’s main public area, Meskel Square. They chanted, sang and waved flags and flowers.

City officials said they were expecting 10 million people to take part, though the final attendance figures are hard to estimate. 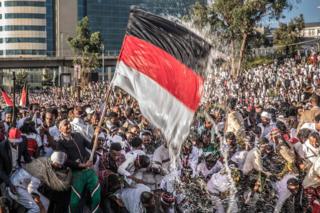 Previously, the annual festival had been celebrated in Bishoftu, 40km (25 miles) away, but similar gatherings have taken place in other parts of Oromia at different times of the year.

The move to the capital, which is surrounded by Oromia, is seen by some as a recognition of Oromo culture by the authorities. For years, Oromo people had complained of cultural and political marginalisation.

But some say it is an attempt by the ruling party to cultivate popular support ahead of next year’s general election, reports the BBC’s Kalkidan Yibeltal. 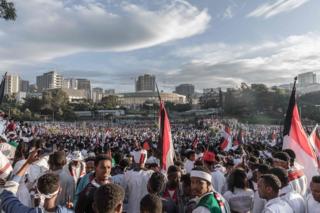 There are thought to be at least 40 million Oromos in Ethiopia, making up more than 30% of the population.

Within the Oromos there are many different traditions associated with where people come from, and Irreecha brings them all together.

The celebration is a chance for people to wear traditional costume.

This man, from the Shoa region, are wearing “Daabe”, made from baboon skin. 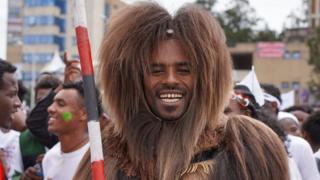 The beadwork, known as chelie, that these women are wearing on their foreheads is common to all Oromos, but their clothes are typical of people from the Borena region. 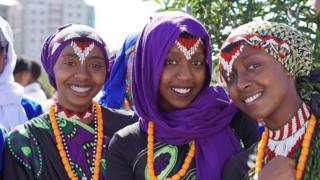 These men made the 400km journey from Bale, in southern Ethiopia, to join in the festivities. Their headscarves, known as ruufa, are worn at any major celebration. 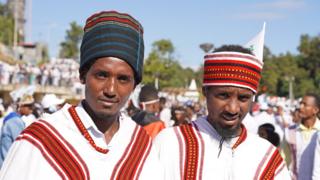 This woman from Hararghe, in the east of Ethiopia, came in the clothes typical of her region. 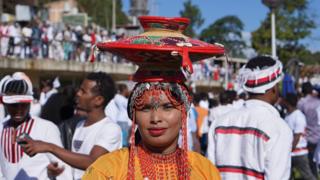 A community from Alaba, which is in southern Ethiopia outside of Oromia, also joined in. 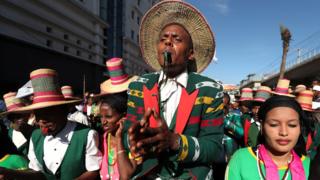 Ethiopia’s Prime Minister Abiy Ahmed is himself from Oromia. 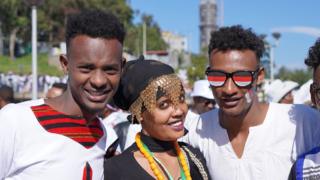