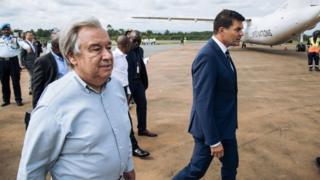 The head of the UN has promised continuing support for the army of the Democratic Republic of Congo in its fight against armed groups.

Visiting the eastern city of Beni, Secretary General Antonio Guterres said it was necessary to go on the offensive against the rebels.

Some 16,000 peacekeepers are deployed in the country, making it one of the largest UN missions in the world.

The peacekeepers were first deployed in the country almost two decades ago but violence continues and the cost of the peacekeeping mission has risen dramatically.

“We will do everything to bring an end to the scourge of insecurity,” Mr Guterres said, according to AFP news agency.

The UN chief also flew to Mangina where the current Ebola epidemic started a year ago. The insecurity in the region has made the job of stopping the Ebola virus extremely complicated and a lack of public understanding about the virus has also hindered efforts to halt the spread of the virus which has killed 2,000 people so far.

Mr Guterres visited a treatment centre where he met Ebola survivors and encouraged people to seek treatment instead of hiding if they felt sick.