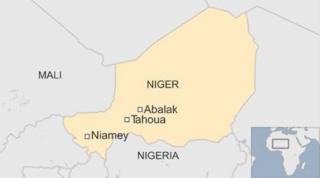 A US NGO worker has been seized and his two guards killed in western Niger, his NGO and a local official say.

He was driven towards the border with Mali, the mayor of the town of Abalak, Ahmed Dilo, told Reuters news agency.

Gunmen arrived on a motorbike and then an all-terrain vehicle, first killing the guards and then taking the aid worker away in the car, he said.

Niger has been less prone to kidnappings than Mali, where militant groups are more active.

Niger battles on all fronts

A spokesman for the NGO Youth With A Mission (YWAM) said the aid worker, who had 29 years of experience in Niger, was abducted from his home in Abalak.

His current whereabouts were not known and no group had yet claimed responsibility for his abduction, the spokesman said.

A local Tuareg night guard and a national guard were killed during the incident.

The aid worker was working with a locally-based development organisation, JEMED, which has links to YWAM.

His family had been informed and the US government was tracking the situation, the spokesman added.

Niger is trying to prevent violence spreading from Mali on its western border as well as battling Boko Haram militants carrying out raids across Niger’s southern frontier with Nigeria.

A Malian refugee camp in the region containing Abalak was attacked a week ago and 22 soldiers were killed.