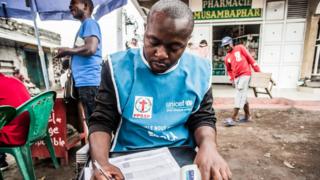 A debate is raging over proposals that a second vaccine be introduced to fight Ebola in Democratic Republic of Congo, currently in the grip of its worst outbreak.

The DR Congo Health Minister, Dr Oly Ilunga, who resigned after being stripped of management of the country’s Ebola response, said the current vaccine is the only one that has been proven to be effective, and an opposition MP said the new vaccine is untested, and fears people in the country will be used as guinea pigs.

Leading health experts say the second vaccine is safe and could be an important tool in holding back the spread of the virus.

So what are the concerns, and are they justified?

It has been tested on over 6,000 people and “has shown outstanding safety,” says Professor Peter Piot, a leading expert on Ebola and director of the London School of Hygiene & Tropical Medicine, which has been involved in evaluating the vaccine developed by pharmaceutical company Johnson & Johnson.

Studies have shown that although the drug is still in the experimental phase, it has proved highly effective in tests on primates (animals genetically close to humans).

The only way to test its effectiveness as prevention measure for humans is for it to be used in an outbreak scenario.

This is how the first vaccine – by the Merck & Co drug company – was successfully deployed in Guinea in 2015.

It was rolled out for “compassionate use” which allows for the use of an unlicensed drug (licenses can take years or decades to get) when no other options are available, but only with authorisation from the government of the affected country.

World Health Organization (WHO) data shows the Merck vaccine has a 97.5% efficacy rate for those who are immunised, compared to those who are not.

The WHO says this vaccine is proven safe and effective against Ebola, but that more testing is still needed for it to be licensed.

So, we’re in a similar place with the new vaccine as we were in 2015 with the current one – there’s substantial evidence that it’s safe and that it could be effective, but it hasn’t been tested in an outbreak, and hasn’t been licensed.

Is there enough vaccine?

If there’s already a vaccine which has been proven effective against Ebola, why not just roll out more of it?

In July, the WHO Emergency Committee said it “recognises the shortage of supply” of the Merck vaccine.

Dr Josie Golding of the Wellcome Trust, says it’s likely there won’t be enough of the vaccine to deal with the current outbreak.

“If so, this would have devastating consequences. We strongly believe there is an urgent need to deploy and assess a second Ebola vaccine, developed by Johnson and Johnson.”

In the short term, the available doses of the vaccine may be sufficient, but not if the outbreak persists.

The Merck drug firm says there is enough vaccine to immunise nearly 500,000 individuals at the current dose, and is in the process of producing more.

Johnson & Johnson says it has 1.5 million doses of its new vaccine available to be deployed.

There are around 10 million people in the two affected provinces combined.

The current vaccine is only being given to health workers and people who might have been exposed to the virus.

So, if DR Congo’s government wants to roll out immunisation across a wider area, it will need more supplies.

Those pushing for the use of the new Johnson & Johnson vaccine, had proposed using it to create a protective wall, vaccinating people outside the outbreak zone.

It is hoped this would prevent the virus from spreading.

The DR Congo government has cited concerns about the complexities of using two vaccines together in the response.

It says there is a risk of creating confusion and increasing mistrust among affected communities.

The fight against the current Ebola epidemic has been marked by community mistrust towards the response.

There are also concerns that the new vaccine – which requires two injections 56 days apart – may be difficult to administer in a region where the population is highly mobile, and insecurity is rife.