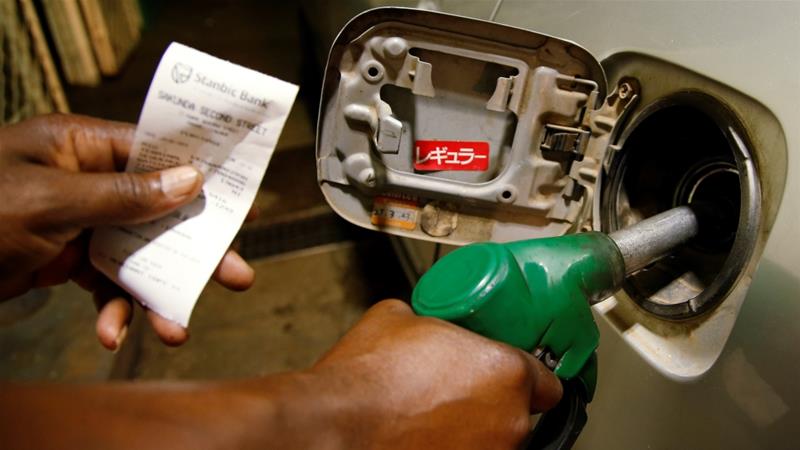 Zimbabwe has announced a fresh increase in fuel prices, four months after a price hike triggered nationwide protests and a brutal security crackdown.

Increasing prices by about 46 percent on Tuesday, the Zimbabwe Energy Regulatory Authority (ZERA) said petrol would cost 4.97 a litre in the local RTGS dollar currency ($1.42/1.27 euro) and diesel would cost 4.89 RTGS dollars.

RTGS dollars are a local electronic currency introduced as Zimbabwe struggles with a shortage of the US dollar notes that have recently functioned as its national currency.

ZERA said the move followed new measures by the central bank removing a subsidy and a preferable exchange rate for fuel importers.

The latest price increase had been expected. It followed a 150 percent fuel price hike in January, which sparked violent street protests and led to the death of at least 17 people after a harsh security crackdown.

The Reserve Bank had been under pressure to remove the fuel subsidy, with economists saying some fuel companies were accessing cheap foreign currency and selling it on the black market instead of importing fuel.

Traders at three commercial banks said the RTGS$ had weakened to a low of 4.6 against the US dollar compared to 3.5 at the opening of trading on Tuesday, its biggest drop in a day since the interbank was launched on February 22.

On the black market, the RTGS$ was trading at six to the dollar, having come off highs of 6.3 last week.

The fuel price hike will likely trigger another round of price increases in a country where the inflation rate reached 75.86 percent in April – the highest in a decade.

“On one end it is good that the fuel price now reflects the official exchange rate but the downside is that it will impact every cost in the country and put pressure on wages,” Harare-based economist John Robertson told Reuters news agency.

The interbank market was meant to encourage businesses and individuals to trade foreign exchange using official channels and improve the flow of dollars.

But this did not happen, with traders accusing the central bank of manipulating the exchange rate, which forced many Zimbabweans to trade for dollars on a thriving black market.

The dollar crunch has led to prices of basic goods soaring. Some businesses charge for their goods in US dollars to cushion themselves against the weakening local currency.

Treasury’s permanent secretary George Guvamatanga said the government would subsidise public transport and that the state bus company would charge a maximum of RTGS$1 for local trips to cushion commuters from the effects of the fuel price hikes.