Pete Wells has been The New York Times’s restaurant critic since 2012. He has reviewed hundreds of places to eat, from high-profile, high-end restaurants to small neighborhood spots.

These are the 10 restaurants he doesn’t want you to miss — for now.

And check out 10 of the best pizza slices in New York City. 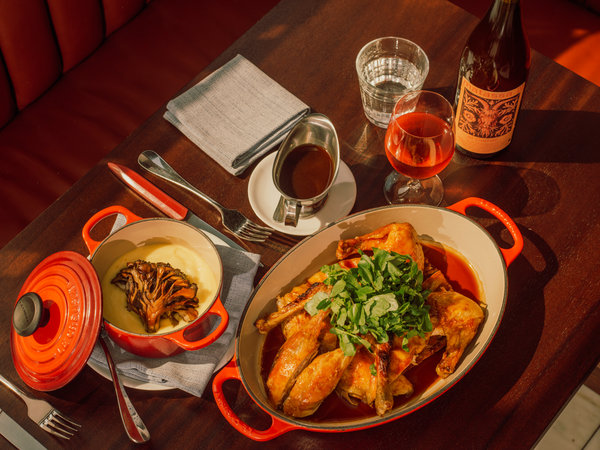 While its approach to French cuisine can be novel (snails with soft scrambled eggs), Frenchette’s setting, menu structure and portion sizes are formidably traditional. Reservations at night are scarcer than Burgundy truffles, but they are easier to find for lunch, which the restaurant began serving this fall.

Rather than stealing looks from Instagram, Adda doubles down on home-style cooking from around India. The menu runs from stuff you may know, like butter chicken, to stuff you may not, like chicken liver masala. Ingredients, like the bouquet of greens in saag paneer, are chosen with care and the spices practically vibrate.

Every opportunity latent in the tasting-menu format is brought out and turned to advantage by Atomix, where each course comes with a flash card that builds your understanding of Korean ingredients and culture. At the end of the night, you have a full deck and a set of new impressions of Korea, too.

Joseph Johnson, known everywhere as J J, can fit more ideas on one plate than most chefs get into their entire menus. The ideas that animate him come from Africa and from across the African diaspora; his global vision has had diners crowding in ever since August, when his arrival brought Henry back from the dead.

Many of the appetizers and main courses at Hunan Slurp turn out to have the direct, intense energy that you’d hope for from a stylish restaurant with a Hunan-born chef. Many, but not all. The bowls of rice noodles, though, are consistently impressive.

A love letter to the simple coffee and tea parlors of Malaysia and the Chinese-influenced cooking they serve, Kopitiam now has a nicer, larger space. You can drop in at any time of day for superior renditions of classics like nasi lemak and grilled stingray; sample a few sweets and snacks; and watch as your milky coffee is cooled and frothed by being poured from pot to cup in long, curving ribbons.

It’s pronounced “missy,” after the chef, Missy Robbins, who’s become the most exciting interpreter of Italian food in the city. Misi’s menu is largely meatless and is divided into two categories: vegetables, seasoned simply but energetically, and house-made pastas.

When you need your faith in restaurants restored, go here. Mako Okano, the chef, has turned the rowdy scrum of shabu shabu hot pot cooking into a quietly personal experience. She cooks and serves nearly every bite of food herself, and making you feel taken care of seems to be her only goal.

On the first floor of a Brooklyn brownstone, Sofreh has a hospitable, dinner-party atmosphere and Persian cooking of the sort that an Iranian émigré might make for friends. The saffron rice, the nigella-flecked loaves of barbari, the eggplant and yogurt dips are painstaking and meant to impress, but they’re also relaxed, with a modern, cosmopolitan attitude.

Crunchy salt-cod fritters with fresh hot chiles; juicy fried snapper escoveitch doused in pickled vegetables; barbecued chicken with a sauce like a Christmas ham glaze: The Islands cooks Jamaican food without gimmicks. This is the restaurant’s second location, but it’s so much bigger, brighter and more welcoming that it hardly seems related to the cramped old spot.

What Are Your Favorite Restaurants in New York City?

Send us your recommendations at [email protected] An editor or reporter will be in touch with you — before publication — if your response is chosen for a new list.

Pete Wells has been the restaurant critic since 2012. He joined The Times in 2006 as dining editor, and also has been a columnist for The New York Times Magazine. He has received five James Beard Foundation Journalism Awards. @pete_wells