Several towns with large ultra-Orthodox Jewish populations are seeing coronavirus case rates that are among the highest in New York. 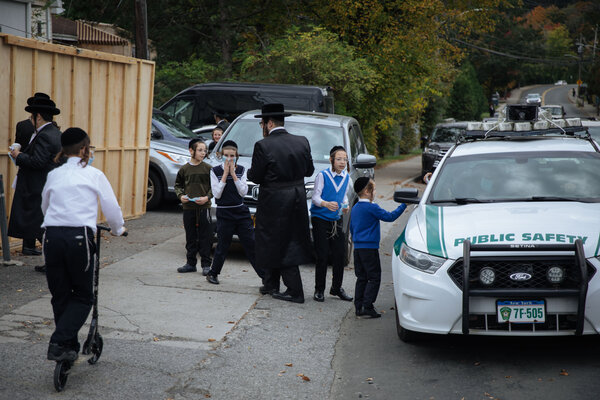 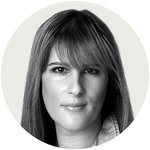 PALM TREE, N.Y. — In this town of 26,000 residents, where life revolves around family, religious services and prayer, the percentage of coronavirus tests coming back positive is at least 15 percent, among the highest in New York. There are more than 200 active cases, enough to place this Orthodox Jewish community northwest of New York City into a state-ordered “red zone” with strict new restrictions on synagogue capacity and public gatherings.

And yet on Wednesday, as men and boys streamed out of prayer services at Congregation Yetev Lev D’Satmar for the holiday of Sukkot, the vast majority not were wearing face masks.

Dina Aker, 67, walked by the synagogue, also not wearing a mask. Her husband, 73, had caught the coronavirus in May, despite, according to Mrs. Aker, being mainly confined to their home. That left her feeling that there was no utility to masks, and that new lockdown measures would serve to only prolong the spread of the disease.

“It’s better that everybody should have it and the thing is finished,” Mrs. Aker said. “I pray every day, ‘Please, my lovely God, make it finish.’”

The peaceful scenes during Sukkot, where families gather in open-air, leaf-covered booths in a celebration of the fall harvest, were interrupted only by a loudspeaker atop a green-and-white town police car parked in front of a shopping center on Forest Road; a recording in both Yiddish and English warned there was a spike in coronavirus cases in the area and stated the importance of wearing a mask.

A police officer stood near the car handing out disposable masks. 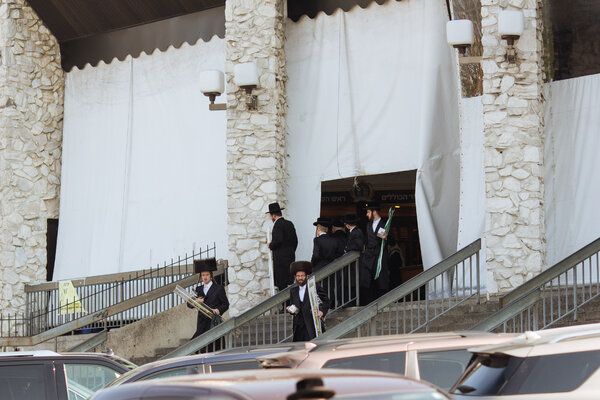 The uptick in the ultra-Orthodox enclaves north of the city has been driven, among many other factors, by distrust of scientific messaging and secular authority, a dedication to communal life, dense living conditions, and fatalism about the virus brought by a traumatic spring of death and sickness, public health officials and experts say.

The test positivity rates and the case rates in these communities are higher than those in the hot spots of Brooklyn and Queens, although state officials are equally alarmed about the recent outbreaks in New York City. (Many health experts believe that positivity rates are often an indicator that more testing is necessary.)

The infections in the region’s ultra-Orthodox communities — specifically in Rockland and Orange counties in New York, and in Lakewood in central New Jersey — may be related; these areas are tightly interconnected, and grew out of an expansion of New York City’s Orthodox Jewish communities. Residents often travel from one place to another for religious celebrations and gatherings, or to visit family.

Dr. Patricia Schnabel Ruppert, the Rockland County health commissioner, said it had been difficult to determine the source of many of the infections, in part because residents in these communities have not fully cooperated with contact tracers. But the interconnectivity among the communities appears to have played a part.