CHICAGO — Adrianne Burton, 38, believes that the next mayor of Chicago will have a sharper, more empathetic eye on the public schools. Carolyn Davenport, 62, is confident that the new mayor will be a superior manager, accustomed to running a career and a household without any fuss.

On her lunch break in the Loop, Denise Thompson, 54, had a different view. “We’re making history, sure,” she said. “But a black woman running the city will be just like anybody else.”

On Tuesday, Chicagoans were headed to the polls to vote for a successor to Mayor Rahm Emanuel. Residents were choosing between two African-American women, guaranteeing that Chicago will become the largest American city to elect a black woman as its mayor.

Competing in the runoff election are Lori Lightfoot, a lawyer and former federal prosecutor, and Toni Preckwinkle, the president of the Cook County Board and the chairwoman of the county’s Democratic Party. Both women beat out 12 other candidates in an election in February, a who’s who of well-known names that made up the most crowded ballot in municipal history.

But on the eve of the runoff, the historic nature of the election was greeted in Chicago with both pride and nonchalance, a sense that electing an African-American woman as mayor would be significant, but not seismic. 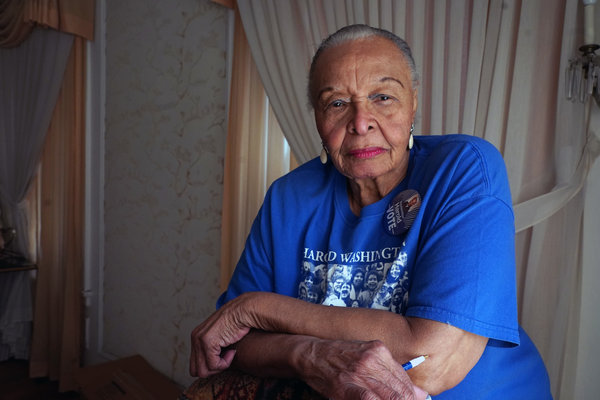 “It is tremendous,” said Josie Brown Childs, a civic leader who worked for Mr. Washington in the 1980s. “But Chicago has been on the forefront of certain black politics, whether it was with Harold or Obama. We’ve been in the lead on those things.”

In interviews around the city during the run-up to the election, Chicagoans said they were carefully weighing the platforms and promises of Ms. Preckwinkle and Ms. Lightfoot, watching their performances in televised debates and considering what kind of leader the current moment in Chicago demands.

“For me, personally, I’m asking, ‘Who is going to be the break from politics as usual in Chicago?’” said Jordie Davies, a Ph.D. candidate at the University of Chicago whose dissertation focuses on political activism. “I’m excited about two black women. But I’m looking at records. I’m looking at who is going to offer the most holistic platform for addressing problems in Chicago.”

The new mayor must contend with a host of complicated issues in the nation’s third largest city, including a deep pension crisis, persistent violent crime, reform of the police department and the question of how to spur investment and growth in long-neglected and segregated neighborhoods on Chicago’s West and South Sides. Under Mr. Emanuel, the downtown has boomed, flourishing with tech companies, high-rise hotels, a sparkling riverfront and luxury apartments. But many African-American residents have moved out of the city in recent years. Mr. Emanuel, who was elected to two terms, did not seek a third term in office.

Polls have suggested that Ms. Lightfoot has a commanding lead over Ms. Preckwinkle, who entered the race last September after Mr. Emanuel announced that he would not run again. Ms. Preckwinkle garnered endorsements from powerful labor groups — the Chicago Teachers Union and the Service Employees International Union — and from prominent black leaders including Jesse White, the secretary of state.

Ms. Lightfoot had a head start on the campaign trail, declaring her candidacy for mayor in May 2018, when it was widely believed that she would face off against Mr. Emanuel.

A relatively unknown figure who has never held elective office, Ms. Lightfoot has spent time introducing herself to voters as a candidate who would focus on overhauling the police department, curbing street violence and rebuilding neighborhoods beyond the affluent downtown and North Side. Ra Joy, an entrepreneur in Chicago who was a candidate for lieutenant governor in 2018, endorsed Ms. Lightfoot early in the race, he said on Saturday at a candidate forum at the Rainbow PUSH Coalition on the South Side.

A mayoral contest between two African-American women has scrambled the usual political calculus in Chicago, or what Mr. Joy called “tribal voting,” in which politicians could count on support from voters of their own race.

“It’s turned that notion on its head,” he said, adding that the successful candidate would have to build coalitions of Latinos, whites and African-Americans in a city where the population is almost evenly divided among the three groups.

Celestine A. Strain, 46, a hospital technician, brought her granddaughter Kalicia, 9, to the forum at Rainbow PUSH, hoping Kalicia would someday remember seeing two black women running for mayor of Chicago.

“It’s amazing for her to see,” Ms. Strain said, adding that she was hoping Ms. Preckwinkle, who has been a familiar face in county government for years, would emerge victorious on Tuesday. “I really believe that she has the right experience.”

The Rev. Jesse Jackson offered no endorsement in the race, saying that he hoped to be more of a peacemaker after what played out in recent weeks as a bitter campaign. On stage on Saturday, he urged both candidates to sign a statement agreeing to appear together the morning after the election. “I wanted to play a reconciling role,” Mr. Jackson said in an interview in his office at Rainbow PUSH. “The campaign ends. Let the healing begin.”