A New Jersey house party on Saturday that left two people dead and at least a dozen others wounded in a late-night shooting began as a 1990s-themed birthday celebration.

Tents and food lined the sprawling front lawn of a home in Fairfield Township owned by the aunt and uncle of a man celebrating his 32nd birthday.

The bash, which began on Saturday afternoon, drew hundreds of revelers. With temperatures in the 80s and Covid-19 restrictions finally easing, the mood was festive, neighbors said.

Then, just before midnight, shots rang out that sent guests diving for cover under cars, said John Fuqua, whose cousin was shot in the stomach and treated at a hospital about 30 miles away in Camden, N.J. Some guests, he said, frantically performed CPR on friends.

“People had on costumes — it was ‘post-Covid, let’s have a good time,’” said Mr. Fuqua, who runs a gang prevention and intervention program, Life Worth Living, in the rural community in southern New Jersey. “And then you got a handful of idiots with guns.”

A 30-year-old man and a 25-year-old woman died from gunshot wounds at the scene, and several of the wounded people had life-threatening injuries, state officials said. Some of the most seriously injured victims were airlifted to Cooper University Hospital in Camden as others made their way to two other nearby trauma centers in ambulances and private vehicles.

A spokesman for the New Jersey State Police, which is leading the investigation, said no arrests had been made as of Sunday afternoon. 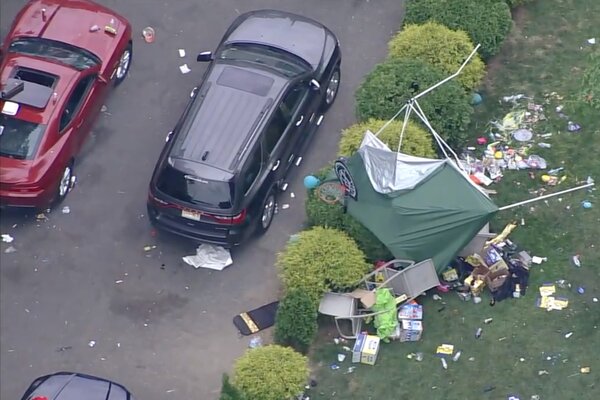 Melissa Helmbrecht, the founder and chief executive of Hopeloft, a nonprofit organization that runs programs for children and families about a mile from the location of the shooting, said nearly everyone in the small township knew someone in attendance.

She said she spoke to people on Sunday whose relatives were injured in the melee.

“It was chaos,” she said. “People were trying to get themselves to the hospital. People were scattering.”

Ms. Helmbrecht said community leaders had held several recent meetings to address what she said was an uptick in gun violence in Cumberland County.

“The sense in this community is that this is just escalating,” she said. “There’s been so much effort recently to try to bring people together and to try to do something about it.”

“The whole community is going to be deeply affected by this,” she added, “and we’re going to have a lot of work to do.”

The two people killed at the party have not yet been publicly identified by the State Police.

The county prosecutor’s office urged anyone with information about the shooting to come forward with tips. Fairfield, a township of about 6,000 residents, is just outside Bridgeton, a city that struggles with crime and high rates of poverty.

“When something like this happens it affects our entire community,” the prosecutor, Jennifer Webb-McCrea, said in a statement. “Everyone loses when gun violence recklessly shatters our sense of safety and security.”

Gov. Philip D. Murphy, a Democrat, said the shooting was evidence that a package of stricter proposed gun laws, including legislation that would permit lawsuits against weapons manufacturers, was needed.

“This despicable and cowardly act of gun violence only steels our commitment to ensuring New Jersey leads the nation in passing and enforcing strong and common-sense gun safety laws,” Mr. Murphy said in a statement. “No community should ever experience what occurred last night in Fairfield.”

Helicopter images of the front lawn of the house taken by KYW-TV, the CBS affiliate in Philadelphia, showed toppled tents, chairs and debris near a swing set. An adjacent driveway was lined with sport utility vehicles.

The couple hosting the party are respected community leaders known for opening their home for lavish parties, Mr. Fuqua said. He did not attend the party, but said his nephew and cousin were there.

The party started at 3 p.m., Mr. Fuqua said, and was winding down when gunfire erupted.

He said he had invited crisis counselors to a previously scheduled Life Worth Living basketball game on Sunday afternoon. Several players attended the party, he said, and the police would be present to safeguard against any retaliatory acts.

“We can’t stop because a handful of people decide to pull out guns,” he said. “We can’t go home and bury our head in the pillow and wish things away. We’ve got work to do.”