WASHINGTON — Incensed by a Supreme Court ruling that further dashed President Trump’s hopes of invalidating his November electoral defeat, thousands of his supporters marched in Washington and several state capitals on Saturday to protest what they contended, against all evidence, was a stolen election.

In some places, angry confrontations between protesters and counterprotesters escalated into violence. There were a number of scuffles in the national capital, where four people were stabbed, and the police declared a riot in Olympia, Wash., where one person was shot.

In videos of a clash in Olympia that were posted on social media, a single gunshot can be heard as black-clad counterprotesters move toward members of the pro-Trump group, including one person waving a large Trump flag. After the gunshot, one of the counterprotesters is seen falling to the ground, and others call for help. In one video, a man with a gun can be seen running from the scene and putting on a red hat.

Chris Loftis, a spokesman for the Washington State Patrol, said that two people were in custody in connection with the episode but that specific details about the shooting were not yet clear, including the condition of the person who was shot.

State and federal courts have rejected dozens of lawsuits by Mr. Trump’s allies seeking to challenge the election results, but the pointed refusal by the Supreme Court on Friday to hear a case filed by the attorney general of Texas loomed the largest yet. By foreclosing one of the last legal avenues Mr. Trump had to potentially block Mr. Biden from succeeding him on Inauguration Day, it left many of his partisans casting angrily about for answers.

Trump flags dotted the air above Freedom Plaza in Washington, where demonstrators — including many members of the far-right Proud Boys group — chanted “four more years!” and vowed not to recognize Joseph R. Biden Jr. as the president-elect.

Stephanie Lalich, 55, who traveled from Baltimore to join the protest in Washington, said that voting machines had been used for widespread electoral fraud — a claim that has been proved false — and that judges had not sided with Mr. Trump because they did not want to take on the issue. 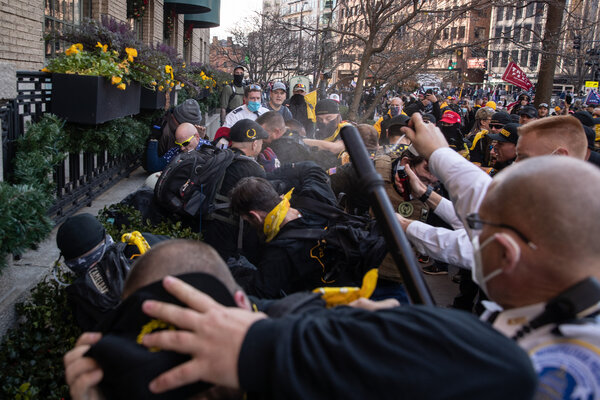 “They don’t want to deal with this,” Ms. Lalich said. “It’s going to have to go nuclear, using the Insurrection Act and bringing out the military.”

One of Mr. Trump’s former national security advisers, Michael T. Flynn, whom Mr. Trump pardoned in November, told Trump supporters near the Supreme Court building not to “get bent out of shape” by the latest setback, assuring them that there were still ways to fight back.

“We decide the election,” he said, greeted by cheers. “We’re waging a battle across America.”

Mr. Trump flew over the protesters in Marine One on his way to attend the Army-Navy football game at West Point. Protesters erupted in cheers as the helicopter and its escort passed overhead.

Enrique Tarrio, the leader of the Proud Boys, a right-wing group known for inciting violence at protests, caused a stir earlier in the day when he posted a photograph taken at the North Portico of the White House and said he had received a “last minute invite.” Judd Deere, a White House spokesman, said Mr. Tarrio had been part of a public tour and that no one inside the building had invited him.

At Georgia’s Statehouse in downtown Atlanta, speakers used megaphones to cast doubt on the election as American flags and Make America Great Again hats bobbed in the crowd. Across the street, a few dozen anti-Trump activists — many dressed all in black — heckled the president’s supporters.

Chris Hill, the leader of a right-wing group called the Georgia Security Force III%, rallied many of the protesters to the Statehouse. Mr. Hill said the Supreme Court had “thumbed its nose at us.” But unlike many others in attendance, he said he accepted that Mr. Trump had lost the election.

“At this point, this thing is over,” he said, adding that he was turning his focus to the two runoff races in Georgia whose outcomes will determine which party controls the U.S. Senate.

Kim Carter, who said God had told her to drive to the Atlanta rally from Jacksonville, Fla., said she was sure that Mr. Trump would be re-elected. She asked a member of Mr. Hill’s group whether it could send some armed members to Florida to protect her and her neighbors from Antifa activists after the election is finally overturned, as she believes will happen.

“Four more years, because God is the one who is in control of this,” Ms. Carter said.

Pro-Trump rallies were mounted in a number of other communities around the country. More than 100 people gathered at a rally in St. Paul, Minn., to display Trump flags and call on the state’s Democratic governor to loosen coronavirus restrictions in the state. In Spanish Fort, Ala., a suburb of Mobile, about 100 people demonstrated, according to footage posted by WKRG-TV. “We want to be part of the ‘Stop the Steal’ national movement,” one speaker there said. “That’s why we’re here.”

The gunfire in Olympia, Wash., came after supporters of Mr. Trump and counterprotesters gathered near the State Capitol on Saturday afternoon. The groups had clashed before the shooting, with some people throwing objects and punches. The air on the street was clouded by smoke grenades and mace, and police officers in riot gear later arrived on the scene.

Both sets of protesters dispersed later in the afternoon, and a large area at the edge of the Capitol campus was roped off with crime scene tape while a police officer and other officials assessed the situation. Several vehicles, including one with a Trump sticker, remained in a parking lot at the scene, along with a scattering of rocks and broken glass.

The Olympia police said there were four arrests and that four officers had been injured, according to the CBS affiliate KIRO.

Clashes also broke out between opposing groups in Washington, D.C., where videos showed people clad in Proud Boys gear punching and kicking counterprotesters who were wearing helmets. The police stepped in and sprayed mace at some of the men involved in the fighting. Another video showed anti-police protesters scuffling with officers and tossing what appeared to be a wooden stick at them.

At night, four people were stabbed near 11th Street and F Street Northwest, according to Douglas Buchanan, a spokesman for the city’s fire department. The mayor’s office said that the four were in critical condition, adding that two police officers also were hurt and taken to hospitals. The authorities did not provide any other details, including which groups of protesters the injured belonged to.

Throughout the day, the police arrested at least 23 people, including six on charges of assaulting a police officer, the mayor’s office said.

Earlier in the day, the pro-Trump crowd in Washington had appeared jubilant at times, despite the setbacks in the courts and the dwindling time remaining before Jan. 20, when Mr. Biden is due to be sworn in. They rewrote the refrain of the Van Halen song “Jump” to say, “Might as well Trump!” Others sold Trump-themed T-shirts and other items advertising his false claims of electoral fraud.

Some demonstrators were more confident than others that Mr. Trump could secure a second term despite losing the election.

Phyllis Monson, 61, who drove for several days from Tonopah, Ariz., to attend the rally, said that she was not sure what steps remained available to overturn the election but that she was convinced it had been unfair.

“This election was such a fraud,” Ms. Monson said. “There needs to be a revote.”

Luther Anderson, 30, said he had voted for former President Barack Obama and for Mr. Trump but could not envision Mr. Biden as president. Mr. Trump has released Black people from prison through a criminal justice overhaul, he noted, while Mr. Biden contributed to the 1994 crime bill that lengthened criminal sentences for many people, many of them Black and some of whom remain imprisoned.

“The media’s trying to make him this good guy and then make Trump the villain,” said Mr. Anderson, who lives in Washington. “It’s like the media, they’re trying to, like, brainwash.”