At least at first, the third major Democratic debate in the race for mayor of New York City focused on the story that has dominated the race this week: Where does Eric Adams live?

After the candidates criticized Mr. Adams, the Brooklyn borough president, over where exactly he sleeps, the debate moved on to other topics like public safety and bike lanes.

With fewer candidates onstage, it was a calmer affair than past debates.

But there were real policy differences, and the candidates continued to try to introduce themselves to voters before early voting starts on Saturday. 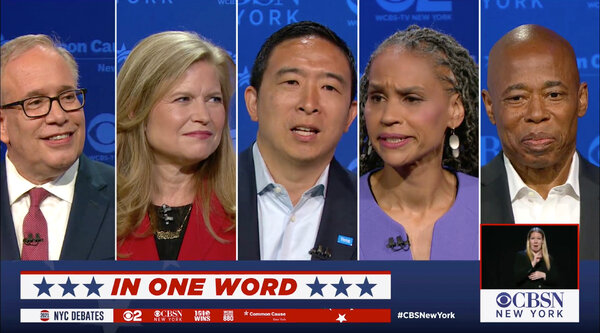 The candidates tackled a central question: Does Eric Adams even live in New York City?

Andrew Yang, a 2020 presidential candidate, attacked Mr. Adams the hardest for spending time at a residence he co-owns in New Jersey, calling him a hypocrite for having criticized Mr. Yang for visiting his second home in New Paltz, N.Y.

“I want to reflect on the oddness and the bizarreness of where we are in this race right now, where Eric is literally trying to convince New Yorkers where he lives and that he lives in this basement,” Mr. Yang said. “He spent months attacking me for not being a New Yorker. Meanwhile, he was attacking me from New Jersey.”

Mr. Adams tried to put the matter to rest once and for all.

“I live in Brooklyn,” he said with a broad smile. “I am happy to be there.”

Mr. Yang, asked if he would have his police detail drive him to his country home as mayor, said he would be a hands-on mayor and would not leave the city for his entire first term.

“I’m going to be here grinding it out,” he said, adding: “New Yorkers are going to be sick of me.”

They sharpened their attacks, and tensions flared.

The debate was fast-paced and substance filled, thanks to the skilled moderation of two CBS journalists, Marcia Kramer and Maurice DuBois.

The candidates, surely aware that this was one of their last chances to break out of the pack, spoke forcefully and emotionally — in their own defense, and in their attacks on competitors they wanted to wound in pursuit of the crown.

After Mr. Yang suggested he would be able to work well with the famously prickly governor of New York, Andrew M. Cuomo — in part because Mr. Yang and Mr. Cuomo’s brother have appeared together on CNN — Scott M. Stringer, the city comptroller, called Mr. Yang “naive.”

“It is not enough to say, ‘We’re all going to be friends, kumbaya,’” Mr. Stringer said. “We need a mayor with experience.”

A few minutes later, Ms. Kramer asked Mr. Stringer about sexual misconduct allegations from two women dating back several decades. Mr. Stringer’s discomfort was evidenced by a twitch in his eye, but he disputed the allegations, incorrectly attacked reporting by The New York Times about one of the incidents, and said he was sorry if he made anyone “uncomfortable.”

Maya Wiley, a former counsel to Mayor Bill de Blasio who is competing with Mr. Stringer for progressive votes, did not let that characterization slide.

“It is not just about discomfort,” Ms. Wiley said. “It takes two to view any sexual conduct as welcome.”

On at least one thing, they agreed: renaming places named for slaveholders

In one of the few moments of consensus, the candidates all said they would be open to renaming sites named for slaveholders.

“Many people are surprised to learn a number of iconic places in our city are named after individuals who held people as slaves,” Mr. DuBois said. “Should New Yorkers have to live on streets or go to schools or buildings named for slave holders or should those names be changed?”

Mr. DuBois referred to people like Peter Stuyvesant, a director-general of New Netherland who owned slaves; a large apartment complex on Manhattan’s East Side is named for him. Rikers Island, which houses New York City’s main jail complex, is named for the Riker family, which includes Richard Riker, who sent Black Americans into slavery.

“We should not honor people that have had an abusive past,” Mr. Adams said.

Ms. Wiley, who previously worked as a civil rights lawyer, said that symbols mattered and that these places should be renamed. But she added that it was also important to ensure that all of communities of color “finally get the attention, the investments and the change that they deserve.”

Maya Wiley cast herself as the top progressive candidate.

Ms. Wiley was able to cast herself as the leading progressive candidate in the debate, helped in part by Mr. Stringer’s scandals and Dianne Morales’s absence on the debate stage.

Nowhere did she do that more decisively than on the question of the police and their use of guns.

“Attorney General Tish James is proposing legislation to limit cops from firing their weapons, use of force as a last resort,” Ms. Kramer said. “Now, some might ask, why not go all the way and take away the guns all together like they do in 19 other countries where the bulk of the police force is unarmed?”

Ms. Wiley did not rule out the idea, as every other candidate did. Instead, she equivocated.

First, she said that the mayor’s No. 1 job was safety.

Ms. Kramer interjected to ask if she would take the officers’ guns away from them.

Ms. Wiley responded by talking about the importance of getting illegal guns off the street. Ms. Kramer tried one last time: “But will you take the guns away from the N.Y.P.D.?”

“I am not prepared to make that decision in a debate,” Ms. Wiley said.

After the debate, Ms. Wiley’s campaign spokeswoman, Julia Savel, called the question “ridiculous” because “no one is even discussing taking guns away from cops.”

“Clearly Maya wouldn’t,” she added, though it was not so clear during the debate.

Just a few years ago, New York City was poised to become the first major American city to implement congestion pricing, a plan to toll cars entering the center of Manhattan to raise money for the subway.

Then the pandemic happened.

Four candidates said the city should move forward with congestion pricing because the city was grappling with terrible traffic congestion.

“We are not suffering from a lack of cars in Midtown today, yesterday, the day before,” said Kathryn Garcia, the city’s former sanitation commissioner who has won support from top advocates for mass transit. “People are coming in and if they all come in by car, we can’t move. We need people to get back on the subway.”

Mr. Yang said he was willing to push back the start date for the tolling plan because he was worried about the city’s recovery and empty offices in Midtown.

“I’d be flexible on the timing of adopting congestion pricing in line with the city’s return of commuters,” Mr. Yang said.