The utility said it expected service to be fully restored by the afternoon, nearly a full day after the company shut off power to 30,000 customers in southeast Brooklyn, so it could make repairs related to the dangerously high temperatures.

It was mostly customers in Brooklyn — about 14,000 in and around the neighborhoods of Canarsie, Mill Basin and Bergen Beach — who were still without power on Monday morning, officials said.

The region had cooled by Monday, as residents across New York, New Jersey and Connecticut woke up in a kind of collective heat hangover. The thermometer fell to 80 degrees in New York City overnight, and the National Weather Service predicted temperatures would not rise much above the low 80s on Monday. 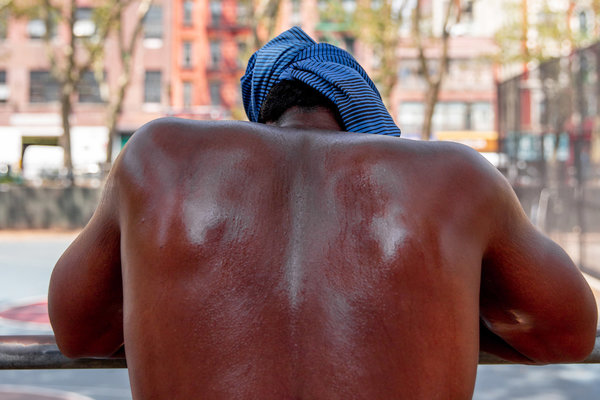 Still, even as the heat broke, Mayor Bill de Blasio lashed out against Con Edison during a news conference on Monday, demanding answers and saying he no longer trusted the utility.

“This was obviously a predictable situation, and therefore, preventable,” Mr. de Blasio said, standing outside a command post in Brooklyn that had been set up to aid people affected by the power shutdowns. “What we’re getting continually is no clarity, no answers, no real timelines from Con Ed.”

City officials worked with the Red Cross to set up an emergency shelter at J.H.S. 278 Marine Park in Brooklyn for people who needed medical attention or relief from the heat, Mr. de Blasio said. That shelter remained open Monday morning.

In a statement on Monday, Con Edison said the shutdowns were necessary “to prevent longer outages” that might have occurred as a result of equipment damage.

On Sunday night, Con Edison officials said that overhead lines supplying the area were in danger of overloading as a result of the heat.

But both Mr. de Blasio and Gov. Andrew M. Cuomo expressed their frustrations, saying the utility should have been ready for a higher-than-usual power demand given that temperatures had been expected to linger in the mid-90s for three days.

“We’ve been through this situation w ConEd time & again & they should have been better prepared — period,” Mr. Cuomo said in a Twitter post Sunday evening.

Like much of the country, New York was under an extreme heat advisory during the weekend as a so-called heat dome spread from the central United States toward the Great Lakes and East Coast.

The city was not the only place to be stricken with blackouts during the heat wave. Massive power failures occurred in parts of Michigan and Wisconsin, where severe storms and fierce winds brought down power lines.

In southeast Michigan, where temperatures also rose above 90 degrees over the weekend, around 600,000 customers of DTE Energy lost electricity, and about 250,000 were still without power as of Monday morning, the company said.

In New York, the power shutdown on Sunday marked the second weekend in a row that parts of the city were driven into darkness.

On July 13, an equipment failure caused a blackout that left more than 70,000 customers on the West Side of Manhattan without electricity for more than three hours.

The city’s public advocate, Jumaane D. Williams, who previously represented parts of Brooklyn affected by the power failures on the City Council, said in a video posted to Twitter on Monday morning that he had been told the power would be restored by midnight.

That outages continued on Monday, he said, was a failure on Con Edison’s part.

“There’s still no electricity in many parts,” he said. “This is outrageous. Con Edison, you have so many questions that you need to answer.”

On Monday, Mr. de Blasio said he felt that Con Edison had not provided a satisfactory explanation for either episode. He called for an investigation into the utility’s structure and practices that would help keep the company more accountable.

Con Edison did not immediately respond to a request for comment on the mayor’s criticisms.