Even as New York City officials focus on vaccinating millions of residents, the coronavirus continues to spread, with more than 50 ZIP codes showing a positive test rate over 10 percent.

Each day recently has typically seen about 5,000 new cases of the virus and has recorded more than 60 new deaths. While the numbers of deaths and hospitalizations are nowhere near what they were during the city’s peak of the epidemic in the spring, public health experts wonder how much worse the data needs to get before officials consider new steps and restrictions.

“I feel like people are numbed by the numbers; I worry about the complacency and fatigue,” said Dr. Wafaa El-Sadr, an epidemiologist at Columbia University’s Mailman School of Public Health. “I worry about the focus on vaccines, rather than what’s happening with the virus.”

Not long ago, Gov. Andrew M. Cuomo pledged to largely lock down areas where positive test rates consistently topped 4 percent. But as rates rose above that statewide, those plans were scrapped.

Currently the sole measure presented by Mr. Cuomo to trigger a lockdown is a complicated projection regarding hospital capacity. Officials say they are not considering any adjustments to that model.

“The reality is that personal behavior is what matters now,” Gareth Rhodes, an adviser to the governor, said, referring to wearing face masks and limiting small gatherings. “Restaurants are still shut down. The vast majority of office workers haven’t returned. We are mostly shutdown still.”

In the ZIP code that includes Brighton Beach in southern Brooklyn alone, more than 500 cases were reported from Jan. 13 to 19. In all, more than 36,000 city residents tested positive during that period; nearly 2,500 people with Covid-19 were admitted to hospitals.

Transmission in the city has become so widespread that Dr. Tom Frieden, a former director of the Centers for Disease Control and Prevention, recommended that all New Yorkers change their behavior.

“People in New York City should leave home only for outdoors or essential indoors activities given the level of spread in the community,” he said Thursday.

The city has already given that advice for older adults, people with underlying health conditions that put them at increased risk of severe infection, and those who live with or care for them. But the state controls when to implement additional restrictions and what should trigger them.

State officials said on Thursday that while case numbers and deaths remained much higher than they were last summer, there had been encouraging declines in the city’s seven-day positivity rate — to 5.7 percent, from 6.4 percent earlier this month, after the holidays — and other indicators. Also, the growth in hospitalizations for Covid-19 shows signs of flattening.

Across the state, “the numbers are coming down, and the hospitals are not overwhelmed,” said Jim Malatras, the chancellor of the state university system who serves on the governor’s Covid-19 task force. “We still have stricter protocols in the state of New York than other states do.”

The need to better control brisk transmission is especially essential now that a more contagious variant of the virus from the Britain has been detected in the city, Dr. Frieden and other epidemiologists said.

With so many cases each day, many opportunities exist for the variant to take hold and for even more mutations to occur, which could decrease the effectiveness of the vaccines. Twenty-five cases of the British variant have been found so far in New York State; additional variants have been discovered in California, South Africa and Brazil. 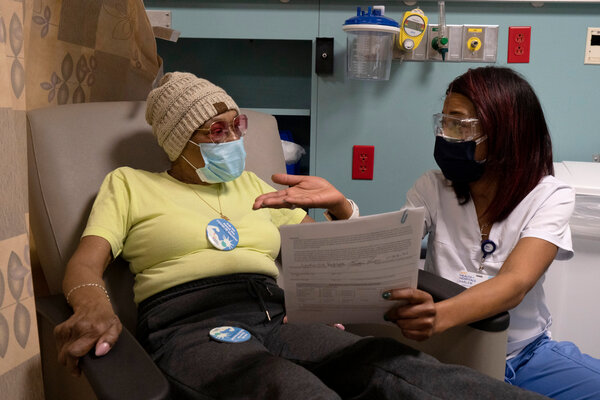 The city’s recent slow and steady rise in cases has been fueled, as it has nationally, by social gatherings dating to early fall, said Dr. Denis Nash, an epidemiologist at the City University of New York. Among the causes were gatherings for the Jewish high holidays in September, Halloween and the winter holidays, though the rise in cases post-New Year’s was less steep than feared.

“I see the cumulative effect of all the extra interactions,” Dr. Nash said.

At the current rate of vaccination, experts say, it will take months to change the virus’s trajectory. In the short term, they worry that the vaccine could present new risks if newly immunized people start socializing without taking precautions. It is not yet clear if the vaccine protects against asymptomatic infection, so vaccinated people may still be able to spread the virus to others.

It is difficult to say just how New York compares with other states. On Friday, by cases per capita, New York State was a hot spot, with the fourth highest rate of coronavirus cases per 100,000 residents in the country, according to New York Times tracking data.

That rate is declining, however, and cases nationally have fallen by more than 20 percent in the last two weeks, according to a Times database.

By positive test rate, a measure that Dr. Frieden said was more predictive of risk, New York was still in the lowest third of states, at 6 percent positivity, according to Johns Hopkins University’s coronavirus tracking data.

That level is still a far cry from the summer, when New York’s steady, 1 percent positivity rate was a source of pride for Mr. Cuomo and one of the lowest in the nation. On Thursday, New York City’s own calculation for its seven-day positivity rate placed it at just over 9 percent.

Dr. Frieden said New York’s high level of testing might make its per capita numbers look worse than other states that might actually have more risk. He also noted that the situation in New York City remained far safer than in the spring, when confirmed virus deaths peaked at 800 per day.

“However, we are seeing steady increases and that is a concern,” he said. “And the other thing that is a huge concern is if the new strain gains a foothold here, it can really spread very, very rapidly.”

Epidemiologists are wary of calling for immediate new lockdowns. Instead, for now, they are calling for targeted measures to try to bring down infection rates, such as a push for more testing in the most affected ZIP codes and among the most vulnerable.

In an inverse effect, parts of the city with the lowest rates of the virus — wealthy ZIP codes in Manhattan and Brooklyn — tend to have the highest rates of testing, city data shows. That should change, Dr. Frieden said, with more testing surging into harder-hit areas.

Patrick Gallahue, a spokesman for the city health department, said the city was already focusing its testing resources in hard-hit areas. Additional restrictions on businesses or gatherings, he said, would have to be enacted by the state.

But to reverse course in New York City before a vaccine takes effect will likely take more drastic measures, such as a lockdown, several experts said.

City officials need the state’s permission before instituting any citywide shutdowns, except for schools. Mr. Cuomo has suggested that schools should close only if the infection rate inside school buildings was higher than that of the community. As of midweek, the citywide positive test rate in schools was far less, at 0.49 percent.

Dr. Nash said other red lines and parameters should be established to guide shutdown decisions, such as one around mortality: How many deaths per day will we accept before we lock down? He also called for more attention to local conditions, such as virus rates in neighborhoods with overwhelmed intensive care units, and to the speed of the virus’s transmission, a measure known as R0, which is not regularly published by the state. State officials say they track those numbers internally.

“Now we are in a situation where we are in a bad place, we don’t know when it is going to stop, and we don’t have any clear vision about the metrics that are going to guide our next steps in our public health response,” Dr. Nash said. “We don’t want to let it just creep up and not hold ourselves accountable to a plan.”