The man, Daniel Prude, suffocated to death in March after he was detained by officers. 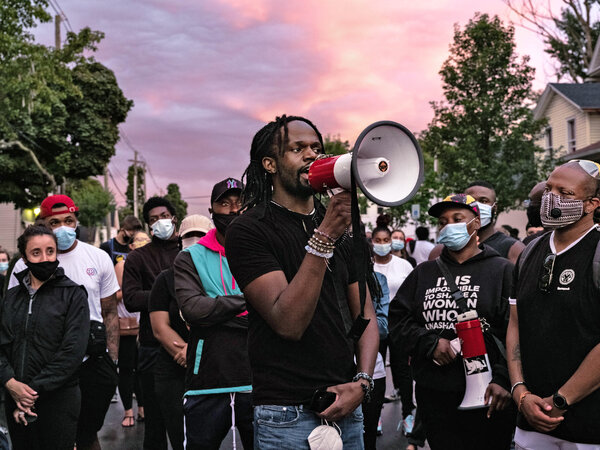 A light snow was falling on Rochester, N.Y., the streets empty and dark at 3 a.m., when the call came in over the police radio: A naked man was running outside, under the influence of PCP, and shouting that he had the coronavirus.

Rochester police officers arrived and handcuffed the man, Daniel Prude, 41. He sat in the road, rambling and incoherent, praising Jesus before demanding that the officers give him a gun, according to video footage of the March 23 encounter.

Then he began spitting on the ground. An officer unfurled a mesh hood — a safety device to prevent being spit on by prisoners — and pulled it over Mr. Prude’s head.

When he tried to rise, officers forced Mr. Prude facedown on the ground, one of them holding his head to the pavement, according to video from the officer’s body camera. Mr. Prude’s demands that the hood be removed turned into gurgling noises as an ambulance arrived. Moments later, Mr. Prude stopped breathing. He was revived in the ambulance and hospitalized, but he never regained consciousness. Seven days later, he died.

Those two fatal minutes, brought to national attention on Wednesday with the release of the raw police videos by Mr. Prude’s family, are the latest to roil yet another American city outraged by the death of a Black man in custody. Protesters took to the streets of Rochester, with Mr. Prude’s relatives raising questions familiar from prior fatal encounters with the police, such as why the officers have not been suspended.

On Thursday, the mayor of Rochester, Lovely Warren, suspended seven officers involved in the confrontation.