WAUKESHA, WISCONSIN (REUTERS) – The man accused of driving his vehicle into a traditional Christmas parade near Milwaukee made his first court appearance on Tuesday (Nov 23) since the weekend rampage and was charged with homicide, as the death toll rose to six.

The death toll was raised after prosecutors said an 8-year-old boy had died, marking the first death of a child in the incident.

Authorities said Brooks deliberately drove an SUV through police barricades on Sunday and the annual parade in the city of Waukesha, about 32km west of Milwaukee.

The high bail comes after Brooks was released from custody in another case after posting US$1,000 cash bond on Nov 11, an amount that the Milwaukee County district attorney’s office now says was “inappropriately low in light of the nature of the recent charges” against him.

Brooks on Tuesday was charged with five counts of first-degree intentional homicide, according to prosecutors, who said he has a criminal history in three states. The charges were set before the death of the 8-year-old was disclosed.

In addition to those killed, more than 60 people were injured.

Brooks, a Milwaukee resident, was arrested near the scene of the carnage on Sunday. Police have ruled out terrorism as a motive and said Brooks, who was out on bail from a domestic abuse case, acted alone.

Police were not pursuing Brooks when he drove his car through the parade route, but one officer fired shots to try to stop the sport utility vehicle, Waukesha police Chief Daniel Thompson said.

The victims killed ranged in age from 8 to 81, and included some members of the “Milwaukee Dancing Grannies” parade group.

The injured included at least 18 children, who suffered facial abrasions, broken bones and serious head injuries and were taken to Wisconsin Children’s hospital in Milwaukee. Some were listed in critical condition, officials said. At least two of the children have been discharged from the hospital.

“Our hearts are heavy over the loss of our grannies and volunteer,” the Dancing Grannies said on Facebook on Tuesday, adding that some of the injured members were in stable condition and one has been released from a hospital.

The incident drew the attention of President Joe Biden, who called the attack “horrific,” and Pope Francis. The Vatican sent a condolence message to the Roman Catholic bishop of Milwaukee on Tuesday.

“The pope “commends the souls of those who died to almighty God’s loving mercy and implores the divine gifts of healing and consolation upon the injured and bereaved,” the message said.

At one of several vigils and services on Monday, Mr Jeremy Wittig, 39, an information technology professional, said,”Waukesha is strong. That’s why we are out here.”

Videos of the incident posted on social media showed a red SUV racing alongside the parade route and then into the procession, appearing to run over more than a dozen people before bystanders raced from sidewalks to help.

“I saw children who were run over,” Mr Brian Hoffman, 33, a Waukesha resident, recounted on Monday. “I am still totally shocked.”

The US$1,000 bail in the previous case was set after Brooks was charged on Nov. 5 with obstructing an officer, reckless endangerment, disorderly conduct and felony bail jumping in a domestic abuse case, prosecutors and state court records show. 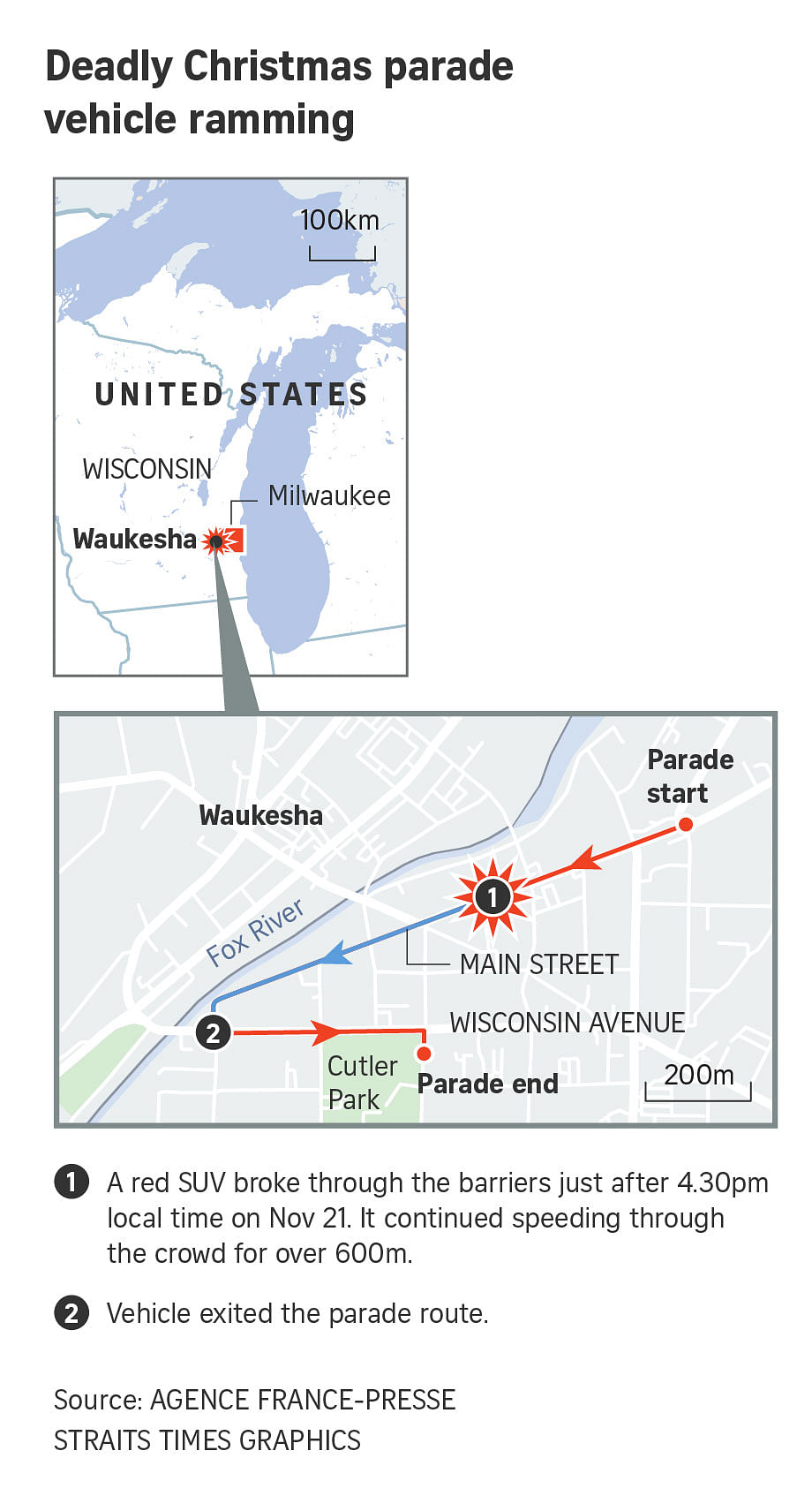