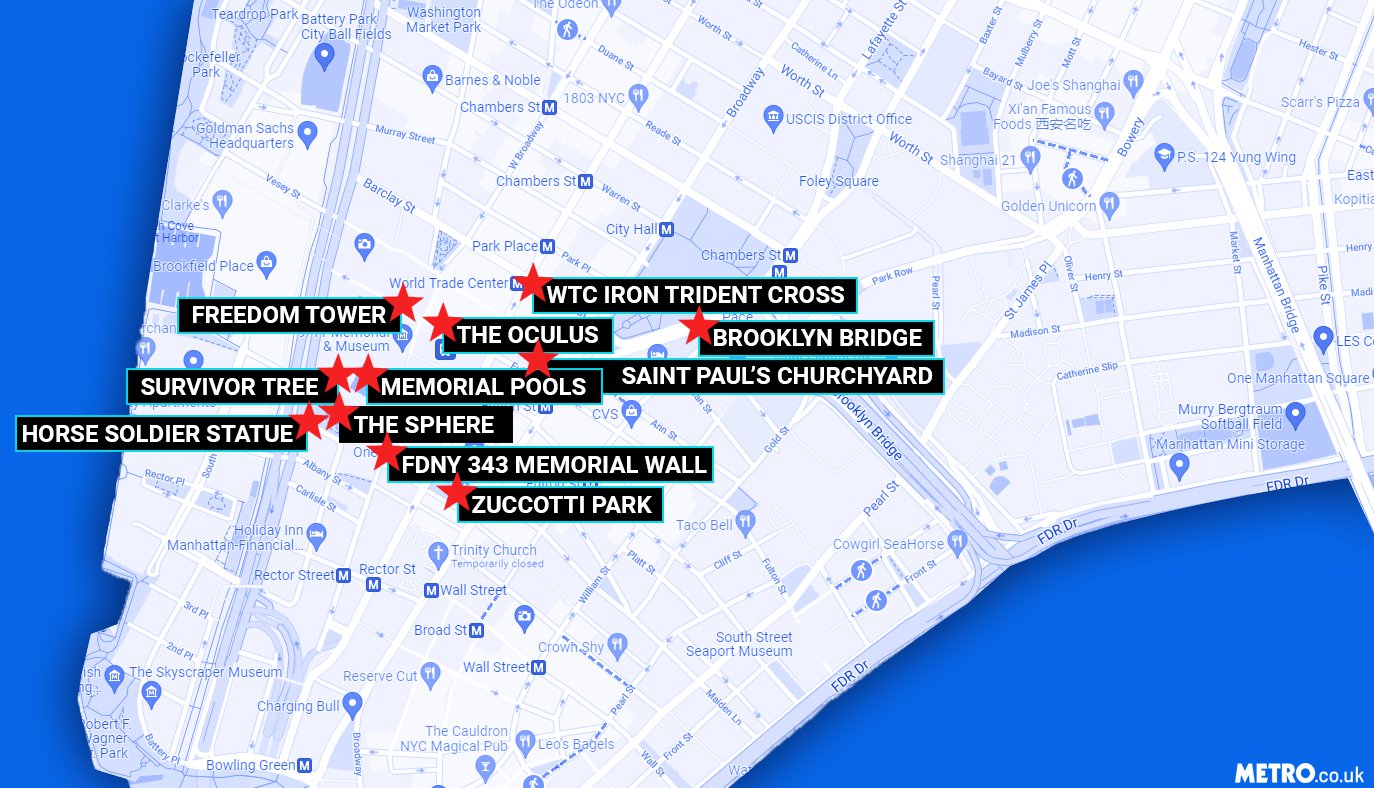 Dozens of 9/11 memorials, from artifacts between buildings to new architectural marvels defining the Manhattan skyline, stand as reminders that New York City will never forget.

Where the Twin Towers stood for the last time 20 years ago today, two reflecting pools commemorate the lives lost in the worst terrorist attack on US soil.

Many Americans have gone to New York City to pay their respects to the victims and heroes who died on September 11, 2001. The 9/11 Memorial & Museum at Ground Zero is the most visited and well known.

Family members gather at the Memorial Plaza every anniversary to read out loud the names of the 9/11 and 1993 World Trade Center bombing victims. The ceremony marking two decades on Saturday will begin at 8.30am local time, with a moment of silence shortly after.

At sundown, the annual Tribute in Light installation will shoot two beams of light up into the sky for the annual ode.

There are dozens more 9/11 memorials and artifacts around the city and surrounding area. Here are some of the ones gracing Lower Manhattan:

Two pools are the focal point of the 9/11 Memorial & Museum. Each of the pools is nearly an acre in size and they sit where the North and South Towers stood before terrorists hijacked planes and flew into them, causing them to crumble.

Names of the 2,983 people who died in the 2001 and 1993 terrorist attacks are inscribed on bronze parapets around the perimeter of the pools.

Both pools have the largest manmade waterfalls in North America, falling 30 feet into a square basin and then another 20 feet into a void at the center.

The Survivor Tree stands by the reflecting pools. It is a Callery pear tree that survived the destruction and dust of the 9/11 attacks on the Twin Towers.

Workers uprooted it from the site and nursed it to a healthy state at a park in the Bronx before bringing it back to the site where it has been incorporated into the Memorial Plaza design.

The tree is now more than 30 feet tall – about four times its height at the time of the attacks two decades ago.

Also known as One World Trade Center, the Freedom Tower features the One World Observatory which offers panoramic views of New York City.

The tower with its light blue, reflective glass alone stands as the defining feature of the Lower Manhattan skyline where the two Twin Towers once beamed.

The massive white steel structure with wing-shaped tips reaching to the sky was part of New York City’s plan to rebuild the World Trade Center. The Oculus represents the city’s strength and resilience bouncing back from 9/11.

It serves as a shopping mall and transportation hub and hosues a PATH train station. The original PATH station was destroyed along with all seven buildings of the World Trade Center.

The bronze, spherical sculpture by Fritz Koenig originally was situated between the Twin Towers at Tobin Plaza. It was recovered from the rubble after the attacks and placed at Battery Park until 2017, when it was moved back to Liberty Park where the World Trade Center was.

Its plaque reads: ‘It was damaged during the tragic events of 11 September 2001, but endures as an icon of hope and the indestructible spirit of this country. The Sphere was placed here on 11 March 2002 as a temporary memorial to all who lost their lives in the terrorist attacks at the World Trade Center.’

The iron trident cross was crafted by artist Jon Krawczyk and replaced the original World Trade Center Cross which was two intersecting beams from the 9/11 wreckage. The original cross was moved to the 9/11 museum.

The wall dedicated to the 343 members of the New York City Fire Department and a volunteer firefighter is located at FDNY Engine 10 Ladder 10, which is right across from the World Trade Center site.

The 18-foot bronze statue embodies a Green Beret soldier on a horse. It is named ‘De Oppresso Liber’, which means ‘to liberate from oppressors’, and is dedicated to US troops deployed to Afghanistan after the 9/11 attacks.

It is unofficially known as the ‘Horse Soldier Statue’ and was first commemorated by President Joe Biden, who was vice president at the time, on Veterans Day 2011.

‘The Little Chapel That Stood’ is located less than 100 yards from the World Trade Center site. It survived the Twin Towers collapse. Many believe the a big sycamore tree planted in Saint Paul’s graveyard protected the church during 9/11.

The park experienced significant damage after 9/11. Its plaza has been used to hold multiple events commemorating the anniversary of the attacks.

The more than 150-year-old bridge is iconic in and of itself, but standing on it notably offers views of Lower Manhattan where the Twin Towers once stood and where the Freedom Tower now stands in their place.