MEXICO CITY — The allegation landed like a bombshell in the United States: One of the world’s biggest drug kingpins had paid a $100 million bribe to the former president of Mexico, Enrique Peña Nieto.

Yet in Mexico, the claim — made on Tuesday in a Brooklyn courtroom by a former ally of the drug lord, Joaquín Guzmán Loera, known as El Chapo — was met with barely a shrug.

The news did not lead any of Mexico’s major daily newspapers on Wednesday. Nobody raised the issue at the morning news conference of the current president, Andrés Manuel López Obrador, usually a daily billboard of the nation’s most pressing political issues.

Mexicans were far more concerned with quotidian matters, such as whether they would be able to refuel their cars — a gas crisis has crippled supplies around the country — and whether the new government would get the votes it needs to create a new national security apparatus, part of its plan to curb violence.

Ensuring justice is done “is not in our hands,” said Dolores Haro, 59, who was eating lunch at a taco counter in Mexico City on Wednesday. She said most people she knew had more pressing worries, like the gas shortage.

And allegations of corruption — even on such a monumental scale — are not that surprising, added Pedro Rodríguez, 28, a marketing executive eating at the same counter.

“We Mexicans are no longer shocked,” he said. “We know that there won’t be a response.”

The muted reaction reflected, in part, hardened skepticism about the honesty of the nation’s political class and the strength of its government institutions in a culture of rampant corruption and impunity, analysts said. Many Mexicans doubt that a charge of public corruption, even one of this magnitude, would get traction in the Mexican justice system, especially in cases that probe the opaque intersection of organized crime and government.

“We understand that there is weak rule of law, the lack of capacity for investigation,” said Guadalupe Correa-Cabrera, a professor of policy and government at George Mason University, who studies organized crime in Mexico. “The names of politicians turn up in trial — but nothing happens.”

She said that a long history of impunity had left Mexicans feeling hopeless and asking, “Why should I care?”

Mr. Peña Nieto, whose six-year term ended late last year, has made no public statement in response to the allegations. But close associates from his administration issued denials on his behalf, including his former chief of staff, Francisco Guzmán, who is not related to the accused drug trafficker and who called the allegations “false, defamatory and absurd.”

“The government of @EPN was the one that located, arrested and extradited Joaquín Guzmán Loera,” Mr. Guzmán said on Twitter. “Since the beginning of the administration, it was a priority objective of the security cabinet.”

While some Mexicans allowed for the possibility that there might be some truth in the allegations made by Alex Cifuentes Villa, a Colombian drug trafficker who worked closely with the Mexican drug lord from 2007 to 2013, doubt seemed to prevail among those who followed the issue. 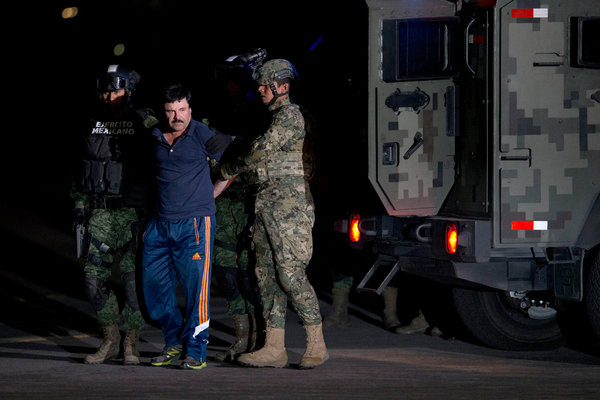 He said that the lack of reaction in Mexico less reflected resignation than a lack of confidence in the source of the allegation.

“What people are waiting for is that these allegations are backed up with evidence,” he said, adding that if the allegations were proven, it would be “a major scandal.”

“If nothing more is presented,” he continued, “it would just be hearsay from a narcotrafficker hoping for some kind of benefit.”

María Celia Toro, a political analyst at the Colegio de México, a university in Mexico City, said that Mexicans have been conditioned by “a long history of false accusations.”

She added, “The most sensible thing to do is to wait.”

Many observers pointed out that if Mr. Guzmán had, indeed, paid Mr. Peña Nieto $100 million, then he did not get much bang for his buck, since he was eventually extradited to the United States by the president. Mr. Cifuentes dated the alleged bribe to October 2012 and Mr. Guzmán was captured for the first time in February 2014. He later escaped from prison only to be recaptured in January 2016 and extradited in January 2017.

“It isn’t logical that you would pay a bribe so that in a few years you will be captured,” said Juan Alberto Cedillo, a Mexican journalist who has investigated Mexican organized crime groups for more than a decade.

In addition, Mr. Peña Nieto might have surmised that any deals the two men had brokered would likely have arisen during judicial proceedings in the United States.

“For all his faults and flaws, Peña Nieto captured Chapo and extradited him, knowing full well that any information would filter out,” said Alejandro Hope, a security expert with a Mexican consulting firm, the Group of Economists and Associates. “The guy was being hunted down from Day 1 of Peña Nieto’s administration.”

Some who have questioned the veracity of Mr. Cifuentes’s testimony also pointed out that Mr. Peña Nieto is still in Mexico. He attended the funeral of a former governor of his home state several days ago, his first public appearance since leaving office. Were he guilty, some contended, he might have taken a page from the playbook of other politicians and fled, or gone into hiding.

During Mr. Peña Nieto’s term in office, his administration and his party, the Institutional Revolutionary Party, were tarred by corruption scandals, including several that implicated powerful former governors. The president saw his initial popularity begin to wane when his wife purchased a home from a government contractor on favorable terms.

The allegations leveled against Mr. Peña Nieto this week were on a completely different scale. But even the former president’s political opponents are treading lightly. Senator Marco Gama of the conservative National Action Party said that the party was waiting to see if the trial in Brooklyn would produce any evidence to back up the accusations.

“To start an investigation, you need proof,” he said. And none has been presented.

Hours after Mr. Cifuentes gave his account, federal prosecutors filed a sealed motion seeking to limit similar testimony. When the motion was unsealed on Wednesday evening, it showed that prosecutors had accused Mr. Guzmán’s lawyers of trying to “create a public sideshow in an attempt to damage United States foreign relations.”

On Wednesday morning, the judge in the case pointed out that Mr. Cifuentes had not testified about something he had done or seen himself, but had merely told the jury something that Mr. Guzmán had told him. Maybe, he suggested to Mr. Guzmán’s lawyers, the prosecutors did not believe Mr. Guzman had been “entirely candid.”

Still, some Mexicans felt the need to do something — to protest, to investigate, and if it were the case, to prosecute Mr. Peña Nieto.

“They should try him, here or there — wherever,” said Armando Venado, 58, a salesman from the town of Texcoco, outside Mexico City. “We’re so accustomed to corruption that nobody does anything. Nobody protests.”