MIAMI — Three years ago, not long after Hurricane Irma left parts of Miami underwater, the federal government embarked on a study to find a way to protect the vulnerable South Florida coast from deadly and destructive storm surge.

Already, no one likes the answer.

Build a wall, the U.S. Army Corps of Engineers proposed in its first draft of the study, now under review. Six miles of it, in fact, mostly inland, running parallel to the coast through neighborhoods — except for a one-mile stretch right on Biscayne Bay, past the gleaming sky-rises of Brickell, the city’s financial district.

The dramatic, $6 billion proposal remains tentative and at least five years off. But the startling suggestion of a massive sea wall up to 20 feet high cutting across beautiful Biscayne Bay was enough to jolt some Miamians to attention: The hard choices that will be necessary to deal with the city’s many environmental challenges are here, and few people want to face them.

“You need to have a conversation about, culturally, what are our priorities?” said Benjamin Kirtman, a professor of atmospheric sciences at the University of Miami. “Where do we want to invest? Where does it make sense?”

“Those are what I refer to as generational questions,” he added. “And there is a tremendous amount of reluctance to enter into that discussion.”

In Miami, the U.S. metropolitan area that is perhaps most exposed to sea-level rise, the problem is not climate change denialism. Not when hurricane season, which begins this week, returns each year with more intense and frequent storms. Not when finding flood insurance has become increasingly difficult and unaffordable. Not when the nights stay so hot that leaving the house with a sweater to fend off the evening chill has become a thing of the past.

The trouble is that the magnitude of the interconnected obstacles the region faces can feel overwhelming, and none of the possible solutions is cheap, easy or pretty. 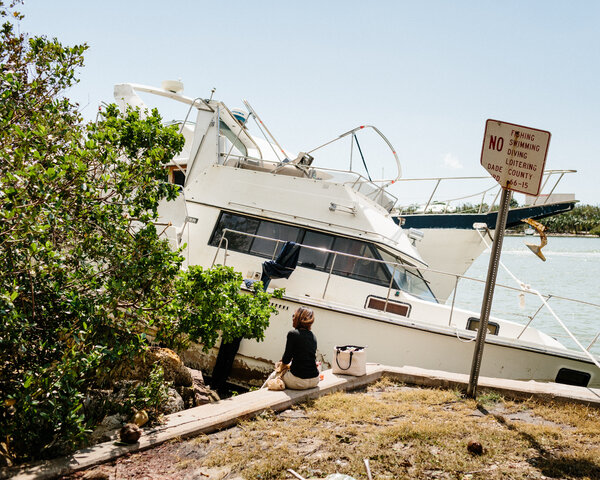 For its study, the Corps focused on storm surge — the rising seas that often inundate the coastline during storms — made worse lately by stronger hurricanes and higher sea levels. But that’s only one concern.

South Florida, flat and low-lying, sits on porous limestone, which allows the ocean to swell up through the ground. Even when there is no storm, rising seas contribute to more significant tidal flooding, where streets fill with water even on sunny days. The expanding saltwater threatens to spoil the underground aquifer that supplies the region’s drinking water, and to crack old sewer pipes and aging septic tanks. It leaves less space for the earth to absorb liquid, so floodwaters linger longer, their runoff polluting the bay and killing fish.

“What you realize is each of these problems, which are totally intersecting, are handled by different parts of the government,” said Amy C. Clement, a professor of atmospheric science at the University of Miami and the chairwoman of the city of Miami’s climate resilience committee. “It’s divided up in ways that make things really, really difficult to move forward. And the bottom line is it’s way more money than any local government has to spend.”

The state could help, to a point. Republican lawmakers, who have controlled the Florida Legislature for more than 20 years, acknowledged in late 2019 that they had ignored climate change for so long that the state had “lost a decade.” They have begun to take steps to fund solutions, directing more than $200 million in tax dollars, collected on real estate transactions, to sea-level rise and sewer projects. Legislators also designated $500 million in federal stimulus money for the fund.

The price tag for all that needs to be done, however, is in the billions. The estimate for Miami-Dade County alone to phase out some 120,000 septic tanks is about $4 billion, and that does not include the thousands of dollars that each homeowner would also have to pay.

No one wants to turn away a penny from Washington, but the proposal for a massive sea wall along one of Miami’s most scenic stretches has produced a rare moment of agreement between environmentalists and real estate developers, who fear harm to the bay’s delicate ecology and lower property values.

“We were, like, ruh-roh,” said Ken Russell, the Miami city commissioner whose district includes Brickell. “The $40 billion in assets you’re trying to protect will be diminished if you build a wall around downtown, because you’re going to affect market values and quality of life.”

Other parts of the Corps’ draft plan, which includes surge barriers at the mouth of the Miami River and several other waterways, are more appealing: fortifying sewer plants and fire and police stations to withstand a crush of seawater. Elevating or flood-proofing thousands of businesses and homes. Planting some mangroves, which can provide a first line of defense against flooding and erosion. Miami-Dade County wants all of those portions to take priority; a final draft of the plan is due this fall.

Sticking points remain. Among the homes proposed to be elevated on the taxpayer dime are multimillion-dollar waterfront mansions — a result of the Corps’ mandate to efficiently protect as much life and property as possible, which critics says inevitably leads to more protection for the wealthy, whose properties are worth more.

And then there are the walls. The inland walls, some fairly small but others up to 13 feet high, would divide neighborhoods, leaving homes on the seaward side with less protection. The sea wall along Biscayne Bay, which could rise to 20 feet and look as formidable as the sound barriers along Interstate 95, would reverse decades of policies intended to avoid dredging and filling the bay.

To some critics, the plan harkens to more than a century of dredging and pumping of the Florida Everglades, which made way for intensive farming and sprawling development but disregarded the serious damage to the environment that the state is still wrestling with.

“It is my sense that most Floridians would live with the risk of water to preserve their lifestyle,” said Cynthia Barnett, a Gainesville-based environmental journalist who has published books about rain and the fate of the oceans. “This idea of working with water rather than always fighting against it is really the lesson of Florida history. If Florida history has taught us one thing, it’s that hardscaping this water that defines us will bring hardships to future generations.”

In fact, when local governments have asked the public how they would like to tackle climate change, residents by far prefer what is known as green infrastructure: layered coastal protection from a mix of dunes, sea grasses, coral reefs and mangroves, said Zelalem Adefris, vice president for policy and advocacy at Catalyst Miami, which works with low-income communities in the county.

“The Army Corps’s plan just looks so different,” she said. “It seemed to be really incongruous with the conversations that are being had locally.”

Officials with the Corps, though, say — gently — that they see no way around what they call structural elements. The storm surge threat to Miami-Dade County is just too grave.

“It’s going to be a part of the solution,” said Niklas Hallberg, the study’s project manager.

He said the Corps is committed to working with the community in the next phase of design for the project, so “maybe it doesn’t look like so much of a wall.”

That sounds like inching toward the vision that emerged from engineering consultants hired by Swire Properties, a big local developer, after the Corps’s draft plan alarmed Miami’s Downtown Development Authority. The consultants suggested building a berm of earth and rock that could be further elevated over time. (A landscape architectural firm brought in by the Downtown Development Authority developed renderings of the Corps’s plan showing dirty brown water in the bay and, yes, “Berlin” graffitied on the wall.)

On a recent afternoon along the stretch of Brickell Bay Drive where a wall might go, Rachel Silverstein, executive director of Miami Waterkeeper, an environmental research and activist group, stood next to high-rises built right up to the water, which she called “the fundamental problem with Miami” because they leave the storm surge with nowhere to go.

(Ms. Silverstein is in the camp of people who favor more natural structural elements to combat storm surge, such as bolstering coral reefs that would also provide an ecological benefit to the bay.)

She pointed over the shimmering blue-green bay.

“Instead of seeing this beautiful water, you would see a gross wall,” she said.

In front of her, a manatee came up for air.