Weather: Sunny and warmer, with a stiff breeze in the afternoon. High in the low to mid-70s.

Alternate-side parking: In effect until Nov. 1 (All Saints’ Day). 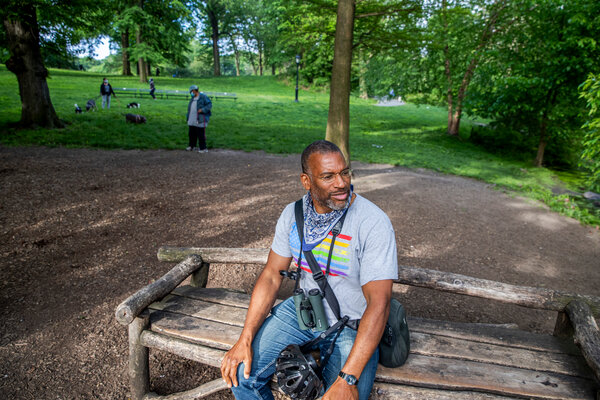 Just before protests erupted in response to the killing of George Floyd on Memorial Day weekend, a video went viral: It showed a white woman making a false report to the police on a Black man.

Christian Cooper, a prominent bird-watcher, had approached the woman, Amy Cooper, and had asked her to put her dog on a leash, as the rules mandated in a section of Central Park known as the Ramble. She had responded by calling 911 and repeatedly telling the operator that an “African-American man” was threatening her.

The video has been seen nearly 45 million times, and the incident was widely viewed as a glaring example of everyday racism.

On Wednesday, a Manhattan prosecutor revealed that Ms. Cooper, who was charged with filing a false report to police, didn’t call 911 just once. She called a second time, falsely claiming that Mr. Cooper tried to assault her. When the police arrived, she told an officer that her allegation was untrue.

[Read more about the court hearing for Amy Cooper’s charge.]

It’s the latest development in a case that reignited a nationwide conversation on the potential dangers of calling the police with false accusations against Black people. Here’s what you need to know:

The second 911 call was unreported until Wednesday morning at Ms. Cooper’s hearing for the misdemeanor charge, which carries a maximum sentence of a year in jail.

“The defendant twice reported that an African-American man was putting her in danger, first by stating that he was threatening her and her dog, then making a second call indicating that he tried to assault her in the Ramble area of the park,” said Joan Illuzzi, a senior prosecutor.

The criminal complaint against Ms. Cooper mentions both calls, but she was only charged with one count of filing a false report. No additional charges were announced on Wednesday.

The incident in Central Park was amplified as Black Lives Matter protesters marched in major cities and spoke out against systemic racism, not only in policing but also in the way white Americans call the police to make false accusations against Black people.

“As my brother’s story trends, I want to say that it doesn’t matter what education or job you have, every Black man is vulnerable,” wrote Melody Cooper, Mr. Cooper’s sister, on Twitter. “George Floyd ended up dead from police knee to his neck. This is why we speak out and post and stay vigilant.”

Ms. Cooper was charged in July, though Mr. Cooper had refused to cooperate with prosecutors, saying that she “already paid a steep price.”

Ms. Cooper had faced public backlash, lost her job and temporarily surrendered her dog. In July, Robert Barnes, Ms. Cooper’s lawyer, criticized what he called a “cancel culture epidemic” and said she’d be found not guilty if the case went to trial.

The judge adjourned the case until Nov. 17.

In the meantime, Mr. Barnes and prosecutors will discuss details of an agreement. The Manhattan district attorney’s office was negotiating a possible plea deal. If Ms. Cooper is convicted, she would most likely avoid jail; she might receive a conditional discharge or be sentenced to community service or counseling.

Even without Mr. Cooper’s cooperation, Alvin Bragg, a former federal prosecutor and a professor at New York Law School, previously told The Times that the video is sufficient evidence for prosecutors, especially because Ms. Cooper focused on Mr. Cooper’s race, which bolsters the case for an intention to file a false report.

Mr. Cooper declined to speak about the second call or a potential plea deal when he spoke to The Times on Wednesday. What happened that day in the park is “not about Amy Cooper,” but rather is a societal problem, he said.

“My response is very simple: We have to make sure we don’t get distracted,” Mr. Cooper said. “We have a very important goal — and we have to stay focused on it — which is reforming policing, getting systemic change to the structural racism in our society.”

Faith Stewart-Gordon, Doyenne of the Russian Tea Room, Dies at 88

How Elmhurst Hospital Center found itself in the epicenter of the pandemic’s epicenter.[Glamour]

And finally: The legacy of Joyce Dinkins

Joyce Dinkins planned to become a social worker, but postponed her career until after her two children reached school age.

During Mr. Dinkins’s one term, from 1990 to 1994, Mrs. Dinkins promoted programs that encouraged literacy and education, and guarded against child abuse. She visited soup kitchens, libraries and schools, and was the honorary chairwoman of the Mayor’s Task Force on Child Abuse and of “The First Day Back to School,” a multimedia public service campaign.

In 1990, she established a public school program called “Reading Is Recreation.” A children’s book collection was named in her honor at the New York Public Library’s Schomburg Center for Research in Black Culture.

Most of all, she was a role model for millions of African-Americans, utilizing the visibility that came with her husband’s office to promote her favorite causes.

“Basically up until this point in my life I have been a private person,” she told The Times in 1989. “However, I understand that that will no longer be possible. So I will adjust in time because I like people.”

Mrs. Dinkins died on Sunday in her home in Manhattan. She was 89.

She was born Joyce Elizabeth Burrows on Dec. 22, 1930, in Manhattan. Her mother was a businesswoman, and her father was one of the first Black people elected as a Democratic district leader in Manhattan and, in 1939, a New York State assemblyman.

She earned a bachelor’s degree in sociology in 1953 at Howard University in Washington, a historically Black college, where she met Mr. Dinkins. They married later that year.

In an interview with The Times, she explained her relationship with the mayor this way: “I can’t say that he asks for my advice; nor am I an adviser. I consider myself more a supporter than I do an adviser. I give my opinions. I can’t say he always accepts them.”

It’s Thursday — be a role model.

I was almost 13. There was a big snowstorm, the biggest in several years.

The Sanitation Department hired us to shovel snow for a dollar an hour at the corner of Delancey and Essex Streets in front of the Essex Street Market.

They gave each of us large snow shovels with long handles, and we went to work. I shoveled away vigorously.

One of the other workers, a grown man, shouted to me.

“Hey, kid,” he yelled. “Have you got rocks in your head? Slow down. We have got to make this job last.”

I did as I was told.