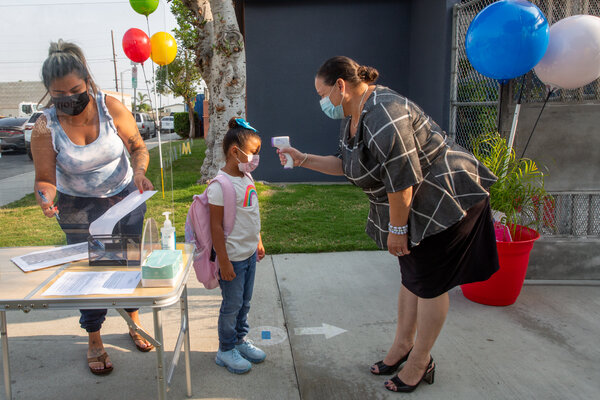 We had hoped that this new school year would be a fresh start — kids with new, shiny backpacks, teachers ready to tackle a new fall semester and Covid on the retreat.

That hasn’t been the case. As classrooms open, there are new anxieties over the Delta variant, masking and vaccines. And other political issues have divided schools across the country.

A third school year of pandemic education seems to be upon us.

In June, when we last sent this newsletter, it seemed that the United States was emerging from the worst of the pandemic.

Summer, we hoped, would be quiet.

But the past two months have brought anger and controversy, my colleagues Sarah Mervosh and Giulia Heyward report, as parents, educators and activists packed school board meetings to debate and often protest policies that are also dividing the country.

Some shout down — or demand — mask mandates. Others rail against policies about transgender students. Districts are clashing over how to teach students about racism, often mired in a national debate over critical race theory.

“The water pressure is higher than it has ever been, and there are more leaks than I have fingers,” said Kevin Boyles, a school board official in Minnesota.

Public schools have long stood at the center of civil strife, from the debate over teaching evolution in the 1920s to the push for school desegregation in the 1950s.

Today, the two biggest divides in schools challenge fundamental narratives of what it means to be an American. The debate over mask mandates puts two values into conflict: collective responsibility and personal liberty. And an examination of the country’s history of racism challenges cherished ideas about America’s founding.

At least 28 states, largely Republican-controlled, have moved to restrict education about race and history. Fifteen states, mostly run by Democrats, have moved to expand racial education, according to Chalkbeat.

Leslie Finger, an assistant professor at the University of North Texas who studies the politics of education, described a shift in focus from test scores to the role of schools in democracy.

“Some of the battles are about, ‘What should our future citizens think?’” she said.

The partisan disputes are forcing teachers and administrators to siphon their attention from other urgent issues.

Academically, many students are starting the fall semester with significant deficits in reading and math.

Socially, many children have spent little time in a classroom. More than one million did not attend school, either in person or online. Most were in the younger grades, with the steepest drop in kindergarten.

And emotionally, many children struggled from new or worsening mental health challenges. Health providers are continuing to see a surge in teenagers visiting the emergency room for mental problems, but the number of children in crisis under the age of 13 is also on the rise.

The state of the virus

The Delta-driven surge has shifted policies, as my colleagues Dana Goldstein and Tariro Mzezewa reported.

Here’s a look at how states and districts across the country are handling the two main issues: masks and vaccines.