DAVIS, Calif. — The coronavirus test center on A Street was bustling on a recent morning. Michael Duey was in line, as usual, with his teenage son. Margery Hayes waited for her wife in the parking lot. Dr. Elizabeth Pham hustled her children in for a quick pit stop.

Inside, each received a five-minute screening for the virus, administered and paid for by the University of California, Davis. Yet none of them is associated with the school.

All last fall, universities across the country were accused of enabling the pandemic’s spread by bringing back students who then endangered local residents, mingling with them in bars, stores and apartments. So U.C. Davis is trying something different.

Rather than turning the campus into a protective bubble for students and staff, as some schools have attempted, it has quietly spent the past six months making its campus bubble bigger — big enough, in fact, to encompass the entire city. 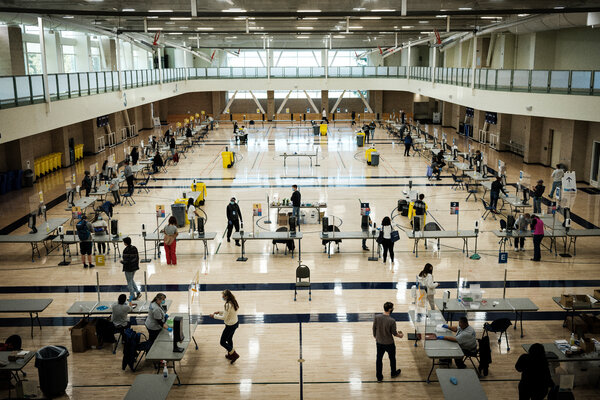 Public health experts say the initiative is the most ambitious program of its type in the country and could be a model for other universities. U.C. Davis has made free coronavirus tests — twice weekly, with overnight results — available to all 69,500 people in the city of Davis and hundreds of nonresidents who just work there.

It has also trained dozens of graduate students to help with contact tracing; recruited hotel and apartment owners to provide free isolation and quarantine housing to anyone in town exposed to the virus; and hired some 275 undergraduate ambassadors to combat health disinformation and hand out free masks.

The university has also recently expanded campus wastewater testing into Davis, and in coming weeks plans to administer vaccinations at its coronavirus screening centers and to bring screening to some public school sites.

Funded by major philanthropic donations, state and federal grants and CARES Act money, the program, projected to cost up to $38 million, has caught more than 850 potential outbreaks in Davis since it got underway shortly before Thanksgiving, according to Brad H. Pollock, who chairs the university’s department of public health sciences and directs the project.

The mayor of Davis, Gloria Partida, calls the initiative “a big science project” that could help revive her pandemic-fatigued college town.

Students make up roughly a third of the population in Davis. As they have dispersed to study remotely, the campus and the town have not only suffered financial losses, but also have been drained of much of their life force. Bars are closed. Streets are still. Hotels, bereft of parents and conferences, are generating little in bed taxes.

“I know the university felt it needed to get this right to be able to open up,” Ms. Partida said. “But for the community — this is the key to us getting back to normalcy.”

Though vaccines have begun to roll out, epidemiologists say playbooks like the one in Davis — masks, distance, hygiene and, in particular, cheap, rapid tests to detect cases quickly — may be the only way to reopen schools and businesses in the near term until the nation achieves herd immunity.

Some schools last year used aggressive testing and tracing to bring students back into residence halls and classrooms, but their protocols typically stopped at the campus boundaries. Testing was so costly, slow and hampered by shortages of processing reagents that medical labs strained just to meet the demand at the universities.

Meanwhile, many students returned to their college towns even if they were not planning to live in the dorms, either because they could not break pre-pandemic leases or because they preferred not to study remotely from their parents’ homes.

“We heard a lot of anxiety from our community,” Ms. Partida said, “about what a disaster it was going to be when the students came back into town.”

At the same time, the local economy was reeling. So was the university. Kelly Ratliff, its vice chancellor for finance, operations and administration, said that at last count, lost revenue stood at more than $80 million, due in part to drastically reduced room and board payments.

With students not scheduled to return until late September, the university decided to exploit its lead time. “We had a chance to observe some of the missteps at other universities and we were dead set on not making those same mistakes,” said the chancellor, Gary May.

Richard Michelmore, a plant geneticist who directs the U.C. Davis Genome Center, urged the university to let him try to create an in-house center for coronavirus testing by repurposing a $400,000 machine normally used to identify plant DNA for agricultural breeding.

Within weeks, Dr. Michelmore’s lab was able to screen thousands of samples per day accurately, at low cost and with overnight results. That set the stage for frequent, wide-scale screening of asymptomatic students and inspired health experts to propose a joint public health project with the city.

“What does it mean to keep your campus well when everyone else is getting sick around you?” said Dr. Pollock, the project director. “The university is part of the community.”

By August, the university had invested in a second testing machine and drawn up a plan to cover the cost of additional personal protective equipment and screenings if the city would provide test sites and staffing.